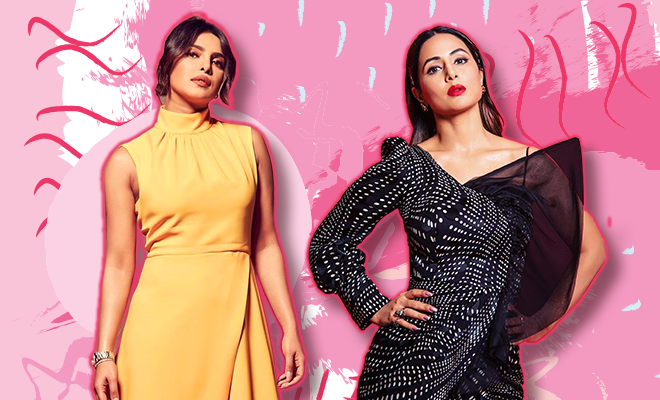 Hina Khan Is All Praises For Priyanka Chopra’s Performance In Sky Is Pink But The Choice Of Words? Questionable

Friends are like the family choose for ourselves. If you have the right ones, they pull you up and stand by you, they also reprimand you if you do something stupid, which happens more often than not. I got really lucky when it came to friends, throughout my life I’ve had friends I can trust with my life. Some of them I met by chance, we talk about it sometimes and neither of us can remember how or when we met for the first time. Those kinds of friends are the best! That is why we were so happy when Hina Khan and Priyanka Chopra bonded so easily at the Cannes Film Festival. At one of the major events of the year, their bonding was the biggest highlight because frankly, no one saw it coming. And now, we have Hina Khan praising PeeCee on her performance in The Sky Is Pink. As sweet as it was, we think the comment was a tad bit ironical and inappropriate.

Earlier today, Hina Khan took to Instagram to show her appreciation for Priyanka’s role in her new movie. She storied a boomerang of the theatre screen playing a scene from The Sky Is Pink with a text that said, “you killed it.” Considering the plot line of the movie is about Priyanka and Farhan losing their daughter Aisha to a respiratory disease don’t you think telling Priyanka that she killed it is not only hilariously ironic but also a little inappropriate? Granted, PeeCee did a fabulous job portraying the character of Aditi, but Hina really could’ve worded her praise a little differently.

Her praise though was acknowledged by Priyanka, who reacted to the story leaving a heart emoji in Hina’s DM. Obviously, not letting the moment go to waste, Hina once again storied a screenshot of hers and PeeCee’s chat adding a little arrow above the heart. Her text on this story was what was very interesting. It read, “A little show off, Love you Peecee.” If Priyanka Chopra sent me a heart, I would story it too!

On the work front, Priyanka’s latest film The Sky Is Pink did really well on the box office and earned a lot of love from the audience. She has now jetted off to the USA to be with her hubby Nick Jonas. Hina Khan, on the other hand, has just wrapped the Mumbai schedule for Vikram Bhatt’s Hacked and is now heading to Lucknow for the next schedule.