Here Are 5 Thoughts We Had While Watching Taher Shah’s New Song Farishta. Basically, We Need A Farishta To Unsee It 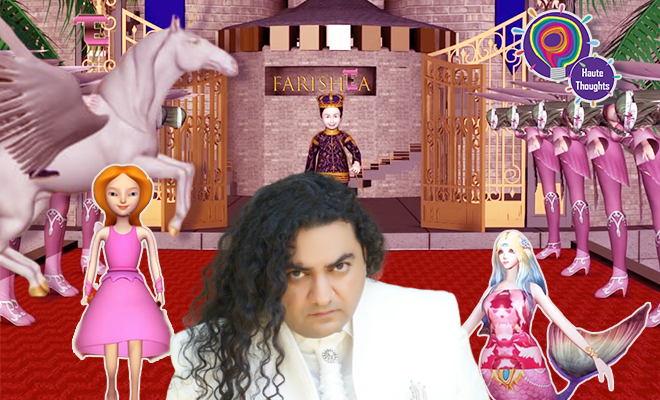 When you have grown up watching shows like the Game of Thrones and Peaky Blinders and the likes of them, all filled with enough number of ways you could use to torture and kill people, you would probably think that you’ve seen it all. But that is exactly when we’d tell you, that there exists a force far greater than any atomic bomb, enough to make your ears bleed and bring you down to your knees without even doing much, and that force is called – Taher Shah.

A Pakistani singer, infamously famous for his ‘cult classic’ music videos that he drops every few years as a way to unleash some kind of a pain  on all of us unsuspecting souls. He, the man with the long hair and questionable music skills, is back with his suspiciously hit (who declared this!?!) single yet again, called Farishta . And if you’re familiar with the work of this man, you’d know exactly what to expect out of it, and how once you see it, there is no going back. In fact, a user who agreed with us even wrote, “I set this as my alarm. Now I wake up one hour before the alarm to make sure I turn it off.”

Also Read : 5 Thoughts I Had While Watching The Video Of Honey Singh’s Latest Song Moscow Suka. All Of Them Are About How Cringy The Video Is

Tricked into watching this by my editor, who didn’t want to suffer alone, I willingly put myself through Taher Shah’s new song Farishta. Apart from realising how these 5 minutes and 45 seconds were longer than 5 years, here are 5 thoughts that crossed my traumatised mind…

It makes you long for a Farishta alright

A little into watching the video of this song, and by little I mean, 5 seconds in, just as Taher Shah enters as an animated creepy little boy riding a Pegasus and starts singing his heart out about a ‘Farshita‘, you start wanting one. You fervently call out one of your own guardian angels to bring you back to life, for chances are, after watching and listening to what I just did, you have died.

It is a Hindi translation of his old song ‘Angel‘

Call it an obsession or lack of enough creative content out there, but seems like this song Farshita is basically a Hindi translation of his last hit song – Angel. Except this one doesn’t have him dressed up as a brinjal or a cheap disney princess with chest hair, but just some plain old and ugly VFX featuring a small boy, distorted mermaid, a fairy and a flying unicorn. 4 years later, and this is what the man comes up with.

A sound way to keep people off the streets

Just a few days ago,  the remix of the old and iconic song Masakali dropped, and the entire nation was filled with a unanimous feeling of disappointment. So much so that police officers had started threatening people to stay in, because if caught on the road, they would be made to listen to Masakali 2.0 on repeat. As the situation gets more intense,  we are thinking that perhaps this is a way to keep us at home and stay put. Desperate times after all, call for desperate measures!

For a moment, it does take your mind off of Coronavirus

While there is a lot that this song will scar us with, we aren’t going to lie. The song did take our minds off of the problem in hand for a while. Having been worried about the spread of Covid-19 at this vicious pace speed, we never saw the real problem come at us and that was Taher Shah with another one of his songs, that is considerably far more dangerous than this virus on the loose.

Swearing off animation until further notice

One would think that considering Taher Shah refrained from making a cameo in this video, this song would somehow be a little more bearable than the rest. But, boy were we wrong. Not leaving us disappointed, Taher Shah managed to keep up with his streak of making people cringe, even if it meant by giving us animation and VFX that made us want to gouge our eyes out. Safe to say, animation has been ruined for me.

Also Read : 5 Thoughts I Had While Listening To Honey Singh’s Loca. We Wanted To Cut Our Ears Off, Mainly