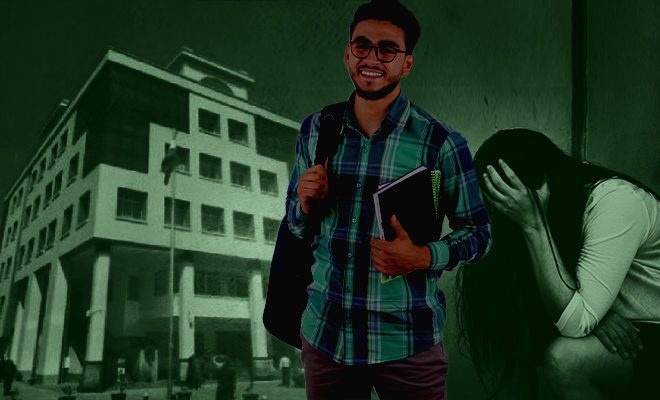 Guwahati HC Grants 21-Year-Old Accused Bail In IIT Rape Case Because He Is ‘State’s Future Asset’. This Is So Wrong.

Every time someone calls out the county on social media, there will be a host of accounts stepping up to label them anti-national. There are minorities pointing out how unsafe they feel, women who are being subjected to violence every other day in this country. The statistics are all there, laid open for us to see. And yet, there are those who would turn a blind eye to the reality and live in their illusion. But what’s worse, is that I didn’t count the honourable high courts of our country to be amongst those who would disregard the severity of crimes against women when taking a decision. And I am disappointed. Recently, the Guwahati High Court granted bail to a 21-year-old student of IIT Guwahati, who was accused of raping a fellow student. Why? Because the accused is talented and ‘the state’s future asset’.

Actually, both the accused and the complainant, who is a student of the chemical engineering the IIT, were deemed as ‘future assets’ by the very clairvoyant court. However, it is evident that while the complainant’s future might’ve already been steeped in possible trauma from the incident of sexual assault she underwent, we’re all about protecting the future of the accused. Because talented. And because male?

IITians can rape now, and get bail because they're 'future assets' even if there is a clear prima facie case. This justice system fails the vulnerable, and those it was designed to protect. pic.twitter.com/OiKvVLVWIU

According to a Live Law report, this talented future asset in question has been accused of luring the complainant to the college under false pretenses of ‘discussing her responsibilities as the joint secretary of the Finance and Economic Club’ at the institute, then allegedly forcibly administering alcohol until she was unconscious, and the allegedly raping her.

Now Justice Ajit Borthakur, who was presiding over this case, in his orders, said that this was a clear prima facie case as the complainant had alleged. But since the investigation had been completed, and since “there was no possibility for the accused to tamper with their evidence or influence them directly or indirectly,”, it was okay to grant him the bail.

daily reminder that this country hates us pic.twitter.com/ZE4dYnQquq

He went on to describe both the complainant and the accused as the “state’s future assets being talented students pursuing technical courses at the IIT-Guwahati, who are young in the age group of 19 to 21 years only….” Furthermore, he clarified that while deliberating on a bail application, a court isn’t expected to debate the merits and demerits of the evidence.

And thus on Monday, the Guwahati HC granted the bail to the accused, after asking him to furnish a bond of INR 30,000 and two sureties of the same amount.

Legally, the honourable justice and court have covered all the bases. But as a woman, I can’t help but wonder how this must feel to the complainant, who will have to watch her rapist (alleged) walk away on bail, no matter how temporary the freedom might be. It’s rather clairvoyant of the court to think a rape accused deserves bail because he is a future asset to the state, talented, and is not likely to tamper with witness, thereby underestimating another possibility that this future asset could in fact become a future sexual offender if show such easy mercies.

Imagine having your sexual assault invalidated just because the guy was in IIT and is supposedly the states future asset lmao pic.twitter.com/n8MHckv2EZ

Why are we still being so lenient with men, especially when the evidence of the crimes they’ve committed are before us? Will women ever get the benefit of the doubt where their futures and safety are prioritised over that of men? I don’t even know, with the kind of news I am reading lately, if I should even be surprised. There are people out there who are okay with the Taliban taking over Afghanistan, with not a care about how it affects the future of Afghan women. There are actually people who are happy to have #MeToo accused men like comedian Louis CK or former Union Minister and journalist MJ Akbar back at work, because wouldn’t it be such a waste of talent to let them repent for their ‘alleged’ crimes, the women whose futures they might’ve ruined be damned?

There are plenty of talented people in Guwahati I am sure who could be a future asset to the state. I don’t think we need to stake so much hope on someone who doesn’t understand consent.

MJ Akbar Returns To The Newsroom And Women Are Justifiably Furious. No Consequences For #MeToo Accused?