MJ Akbar Returns To The Newsroom And Women Are Justifiably Furious. No Consequences For #MeToo Accused?

As if the world was given some TikTok challenge of becoming even more shittier for women, #MeToo accused former Union Minister and journalist MJ Akbar is reportedly returning to the newsroom. For those not aware (which is rather unlikely), in 2018, during the first #MeToo wave, journalist Priya Ramani and multiple other women journos, like NPR’s Pallavi Gogoi, accused MJ Akbar of sexual harassment in the workplace. There were blazing editorials written, revelations made, and Akbar even filed a defamation lawsuit against Ramani, which the latter was acquitted in. This case was perhaps one of the defining cases of India’s #MeToo movement. And yet, not only is the accused roaming free while the women he allegedly harassed continue to live with the trauma, but he has also been hired by a news channel, Zee Media’s WION. 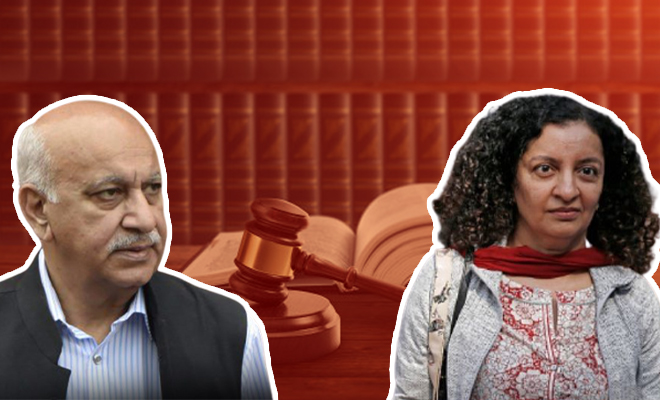 According to a report by Newslaundry on Wednesday, MJ Akbar’s hiring has not yet been announced by the channel, but he has been present at their editorial meetings which has sparked discomfort amongst the staff. I wonder why… (sarcasm).

'Some people are wary about him joining…They aren’t revolting, but there are murmurs.'

MJ Akbar resigned as minister of state for external affairs in 2018, after a number of women who had worked with him accused him of sexual harassment.https://t.co/PUt8yJkoy4

Similarly women journalists, social media influencers and #MeToo survivors are justifiably outraged. This reeks of the fact that no matter how much women come forward to call out the men who’ve wronged them, society continues to let them get away with a token slap on the wrist. More easily if they are powerful men with the right clout. And then it wonders why women say #AllMenAreTrash. Because as you can clearly see, the patriarchy that fosters such sexual predators isn’t just trash, it’s the non-biodegradable plastic kind, which when you dump, gets thrown back at you because it is going nowhere for another hundred thousand years.

The re-emergence of serial sexual predator MJ Akbar in a newsroom is disturbing. ~20 women have come forward to share their stories. And now journalists at news outlet WION say that Akbar has been attending editorial meetings.

MJ Akbar has never apologized, nor acknowledged the pain of the truths carried by ~20 women over the years. How will a newsroom report on the voices of people speaking truth to power.

Akbar sued Priya Ramani for speaking out. Worth remembering Judge Ravindra Kumar Pandey’s verdict against MJ Akbar in that case: “The time has come for our society to understand the sexual abuse and sexual harassment and its implications on victims.”

Imagine working with a known predator, accused by many (20) in your own fraternity of sexual harassment.
He had to resign from the Modi govt as the allegations were overwhelming. He even fought and lost a case against Priya Ramani.
#MJAkbar #Zee #MeToo https://t.co/itgqusgk85

Love how MJ Akbar's career and image are suffering due to the #metoo allegations.
NOT.

Who was talking about cancel culture and how that affected lives of men, come again? #MeToo #MJAkbar https://t.co/OIbSZYpNAU

"Men's lives are ruined by the #MeToo movement"
https://t.co/Rwx36oEuxO

MJ Akbar, the man accused of sexual harassment in a newsroom by MANY female journalists is back in a new newsroom?

Can’t wrap my head around this.

Let me give you a quick update of what happened since over 20 women named MJ Akbar as their assaulter – He pick and chose Priya Ramani, filed a defamation and LOST IT.

He is a KNOWN predator – what did MJA lose?
NOTHING.

#MeToo can take a hike. Powerful men don't take a dent (yet they keep harping about loss of reputation).

Suhel Seth is back to whatever he does and MJ Akbar is back to newsroom. https://t.co/EBnhrZX3gY

Ab theek hi hai na? Disgraced American comedian Louis CK is back on tour. Bill Cosby, who was accused and then set free on multiple counts of sexual assault, despite damning accounts, is planning his return to television. Didn’t Vikas Bahl get cleared of his sexual assault charges by some internal committee and go on to direct a show recently? Suhel Seth, reportedly accused in #MeToo is #FreeToo. So why should we be surprised that former Union Minister and journalist MJ Akbar, accused during the first #MeToo wave of sexual harassment by multiple women journalists, chiefly Priya Ramani, is back to his day job in the news room? I mean, when have men ever really faced the full blow of consequences for their crimes against women, right? Instead, we’re asked to think about them as humans with careers, families, and talent, even when they never treated their own victims as humans when they preyed on them.

Notwithstanding certain #MeToo allegations &court cases @mjakbar is STILL a sharp, talented, innovative journalist &an UNPUTDOWNABLE editor beyond doubt. He has every right to COMEBACK to #NewsRoom his original field of #Journalism. Welcome step @WIONews @ZeeNews @subhashchandra. https://t.co/CaGJtkyCbr

Sometimes I wonder if Harvey Weinstein was that one titan that we got as an appeasement sacrifice. But with so many going free with barely any consequences most of which are a monetary, it’s as if this world of men is trying to tell us, “Look, we gave you one or two punching bags to project all your wrath on and get your justice or closure or whatever it is you women seek. Ask no more for severe consequences for all the other men like MJ Akbar.