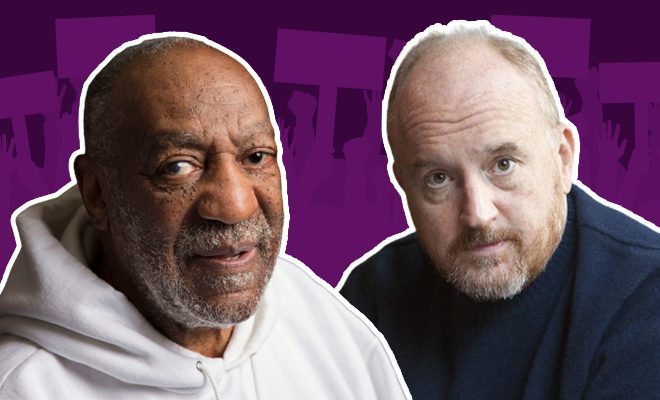 This past week has been so overwhelming for women. On one end, our Indian sportswomen are making us proud at the Tokyo Olympics; on the other, one lost match and the Dalit players in the hockey team have their families thrown casteist slurs at. On another end, a nine-year-old Dalit girl is gangraped, her body cremated quickly by one of the accused to tamper with evidence. And on yet another end, one woman’s allegedly wrongful attack on a man has a majority of Indian men chastising the entire feminism and #MeToo movements. And if that wasn’t enough, even though it was, I woke up this morning to news that disgraced American comedian Louis CK, who was accused during the #MeToo wave of sexual misconduct, has announced a comeback tour.

He follows in the illustrious footsteps of another accused comedian, Bill Cosby, whose sexual assault accusations spanned from 1965 to 2008. On June 30, 2021, his conviction was overturned by the Pennsylvania Supreme Court, and preventing him from being tried again for the same crimes. Cosby is also planning a comeback.

It was in 2015 that rumours of his sexual misconduct, where he’d masturbate in front of female comics and writers, began surfacing. In 2017, a film that Louis CK starred in was all set to have its premiere, but it was cancelled amidst rumours that the New York Times would be publishing an exposé on him, in which five women accused him of sexual misconduct. The comedian issued a subsequent statement according to The Washington Post, where he admitted to these acts, which he at the time thought were okay because he “never did what he did without asking first”. He also acknowledged the power dynamic that might’ve caused this delusion, stating ”the power I had over these women is that they admired me. And I wielded that power irresponsibly.”

In the aftermath, as a bunch of news publications have worded it, Louis CK’s career did ‘derail’ a bit, costing him roughly $35 million in lost income. But when he began making small, silent returns to the comedy scene, there was opposition, as well as support in the name of redemption.

The ‘consequences’ for men is everyone’s biggest concern. But what about the women?

When it comes to the #MeToo movement, there’s a certain section of men (a very large section, I daresay) that belongs to the #MenToo and #NotAllMen school of thought. It gives the illusion that the #MeToo movement does not recognise male victims of sexual violence and harassment, which is untrue. The other two movements are actually counter movements that seem to disregard the nuances and need of #MeToo, just as the #AllLivesMatter movement does with the #BlackLivesMatter one.

There’s this strong belief amongst these men that ‘real’ feminism and feminists are actually very rare, and the rest are all just feminazis and pseudo-feminists who peddle fake feminism. *FACEPALM* And if you’ve been around on social media during these Olympics, you would’ve seen how this logic is used to pit one kind of women against other kind of women. For example, sports women who win medals against Bollywood actresses who speak up about topics that Indian men don’t particularly enjoy being called out for. An offshoot of this argument also talks about how there’s a dark side to feminism and the #MeToo movement which does not bother about what the consequences could be for men who might end up being wrongly accused. Or even if rightly accused and the conduct is not something irredeemable.

Notice how the emphasis is on the well-being of the man at all times, irrespective of whether he is accused, the accusations have credibility or he himself has admitted to the criminal behaviour. What will happen to his career? His family? His wife and children or girlfriend or partner? If he is a celebrity, what about all the gigs he has booked? All the money he will lose? Shouldn’t we rehabilitate them? Isn’t that what it’s all about?

Meanwhile, the women who lay waiting for justice to be served have to bear the trauma of having gone through what they did, for the rest of their lives. What’s more, there was a lot of real consequences for them. They weren’t believed for the longest time. In the case of Louis CK, in fact, two aspiring female comedians who Louis CK masturbated before, were indicated by Louis CK’s manager that they would suffer professional consequences if they spoke about this incident. Women in such situations are often young professionals who will go on to live in fear every time they’re called for a meeting with powerful men because of what happened to them once. As for the women, there’s that to live with, watching the man who harassed, assaulted or raped you, on television or on posters, billboards and every place of publicity, knowing that while your life is forever altered, the man gets away with mere infamy and a solid chance of redemption.

Oh and you know how all publicity is good publicity, right? Many might buy tickets to the comeback vehicles of these accused comedians just to see how they hold up after all this time.

A comic I used to respect had Louis CK on their pod recently, now this Che joke about Biles’s assault (which I’m sure will have 0 consequences), Cosby being released after 60+ rapes/the Activision ‘Cosby room’, it’s so clear our culture still doesn’t give a FUUCK about survivors.

It’s the same everywhere, even back home

Do you remember how many men were accused during the #MeToo wave? Some, without clout, have had to give up their well-established careers and businesses and are now trying to make their space behind the scenes. Others, like director Vikas Bahl, sat through some suspicious ‘internal inquiry’ and were given a clean chit, and have already returned to work and created content. Alok Nath had the rape accusation from years ago against him dismissed due to lack of evidence. Sajid Khan is AWOL, despite so many prominent models and actors speaking up about his alleged lecherous misconduct. Many more filmmakers and stars were named in one-off cases, like the one where Tanushree Dutta accused a bunch of men, including Nana Patekar of misbehaviour.

Lest we forget, the Priya Ramani case against MJ Akbar, and how she was the one who got slapped with a defamation lawsuit. Or the case against former CJI Ranjan Gogoi by a Supreme Court staffer, where not only was the accused himself presiding over the panel that dismissed the case, but according to the Pegasus Project revelations by The Wire, she was on a list of potential surveillance targets.

What have been the consequences for all these men? They’ve lost jobs. That’s it. Weigh that against the lifelong trauma and the physical, psychological, and financial fallout that their victims have had to endure, and tell me it’s a fair outcome. Tell me, that we don’t need feminism to constantly fight this battle, despite a few bad eggs, because if we stop for even a moment, this male-dominated world that hates women will ravage us.

The problem isn’t that forgiveness and redemption are not a thing. The problem is that it comes too easily and leniently to men than it does to women, and for all the wrong reasons. In the case of Louis CK his being a white man plays a huge role in him being un-cancelled just as easily as he was cancelled. In another case, like in our sweet old Bollywood and politics, it is money and power plays that make it easier for men to get away with murder, literally, instead of face any consequences, which often feel more like a slap on the wrist than actual, life-changing consequences. Moreover, this then discourages women from coming forth to report their abusers, because really is all of that fight even worth it for such lightweight justice?

In the end, there is a need to take a long, hard look at how we as a society have adapted in the aftermath of #MeToo, and that the ‘consequences’ are harsh for the right people.