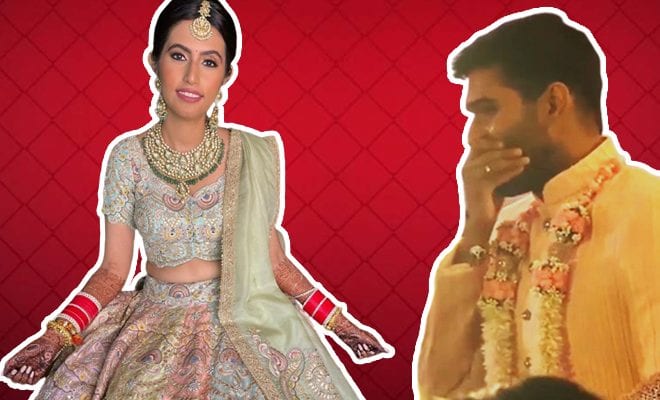 Groom Gets Emotional Looking At His Bride In A Lehenga Of His Choice. I Want What They Have

I have had dated a few narcissists before. With them, it’s like you care for them, they care for themselves – so what does that mean? It means nobody cares for you. And if you feel like only you have your interests in mind, then is it a relationship or a very toxic office culture? Which is why I love it when someone makes you feel safe enough to believe that they care about what you want, what makes you happy. It makes a relationship so beautiful – selflessness and love. Recently, a video went viral which shows a bride surprising the groom with the lehenga she picked and he is left spellbound.

In the video you can see the bridesmaids holding dupattas in front of the bride so the groom cannot see her. Slowly, one by one, they take the dupattas away, revealing the bridal lehenga she picked. You can see the groom getting surprised by the look. He is happy and emotional looking at his stunning bride, dressed in a pastel lehenga.

It was actually the stylist, Rashi Kapur who revealed what was so special about her outfit. The bride was actually interested in wearing a red lehenga at the wedding, like most women. However, her groom, loves pastel lehengas and fancied her in one.

ALSO READ: Groom Cries Tears Of Joy As He Watches The Bride Walk In. This Is Like A Scene From A Rom Com

So it looks like the bride had made him believe that she will be wearing a red lehenga but instead, she wore one that he liked. It’s really sweet! When both partners care for each other and like making the other person happy. The groom was so emotional after seeing her selfless move!

ALSO READ: This Bindaas Bride Climbed On To Her Husband’s Lap On The Wedding Stage!