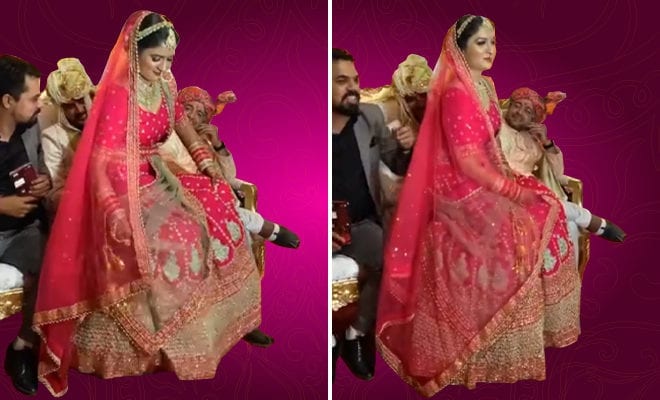 This Bindaas Bride Climbed On To Her Husband’s Lap On The Wedding Stage!

Almost every Indian bride is given SOPs before the big day. Or at least they used to be told that they should look down, be a little shy, play the part of the coy, Indian bride to the hilt. But now, most women have abandoned these traditions meant to strait-jacket woman and are embracing their individuality. So now, we have a brides who dance their way to the mandap, a bride who shot her wedding video in shorts and her choli and several brides who refused to marry when their husband arrived at the venue intoxicated.

So we know now that there is not right way to ‘bride’. And while families clap along the sidelines as the bride and groom take centrestage on the big day, with no dowry demands in sight because everyone is progressive, once in a while something happens and even the coolest family is baffled.

We are talking about how this bride who climbed into her groom’s lap and just stayed there. She’s being called bindaas and what not and we have to say, we are very amused by this video. The bride in the video saunters over to her groom, who is surrounded by his friends and climbs on his lap, and sits there smiling. The comments section is filled with people laughing, entertained with what the bride chose to do. Women in the comments are also relating hard to her, some saying this is what they are likely to do at their own wedding. The video went on Instagram almost a month ago but seems to have caught the fancy of everyone just about now.

We love how brides nowadays has find their tribe and people who cheer her on as she continues to be herself, which is the best way to be. I love this video and I am likely to be this kind of bride, you know, if I get married again.