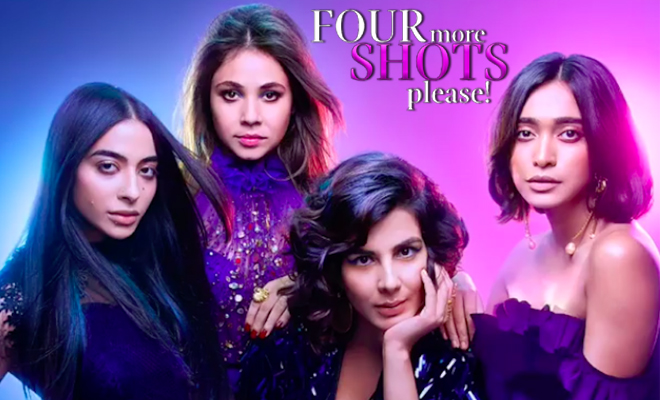 Four More Shots Please! Season 2 Is A Great Weekend Binge. Here, Women Support Each Other While Taking On Misogyny With Wit

I have been waiting for a while for Four More Shots Please! season 2 to release on Amazon Prime. So now that it is here, I binge-watched the show and completed the entire season at one go. In a phase where our spirits are in the doldrums, a little burst of colour, exotic locations, stunning outfits, and half buns felt like visual therapy. Add to it that the stories find a balance between relatable and aspirational, and you’re left with so much to reflect on.

Season 1 ended on a rather wtf note as the girls – Damini (Sayani Gupta), Umang (Bani J), Anjana (Kriti Kulhari) and Siddhi (Maanvi Gagroo) – have a showdown. Jeh (Prateik Babbar) broke up with Damini. Umang’s girlfriend Samara (Lisa Ray) stops talking to her. Anjana is arrested for drunk driving and is at the risk of losing her daughter Arya’s custody. Siddhi refused Mihir’s marriage proposal and her little secret stripping show is no longer a secret.

The girls unite after four months as Siddhi drunk dials Umang and break down on call as she has been lonely back-packing across Europe. The three friends go rushing to meet her and find her having a one night stand with a hot dude who later turns out to be an escort. From a shy virgin to a woman embracing her sexual desires, Siddhi has come a long way. And so has others. Anjana got bailed out by her ex-husband and is limiting herself to one drink a week. She has also developed a healthy relationship with her ex-husband’s wife, Kavya (Amrita Puri). In fact, she’s in a new relationship herself.

Transformation comes through despair but it is not immune to perforation. It isn’t stagnant and through the course of 10 episodes, we realise that adulting doesn’t mean being perfect all the time. It simply means having the courage to speak up, chase what you want and simply not give up.

Siddhi has overcome her body image issues and has gained control back of her self-esteem. She has found a new career in stand-up comedy and is more open to sexual experiences. From her parents realizing how they made her suffer by trying to fit her into boxes to Siddhi being able to actually discuss sex with her mother, we can see an idealistic version of Indian parents. This version is the kind we really wish to be the rule and no exceptions.

The second season of Four More Shots Please also explores misogyny at the workplace as Anjana’s new boss constantly passes sexist remarks on her, takes away her big clients and hands them over to the men and assigns menial tasks to her. But the last straw is when he takes her right to promotion as a senior associate and gives it to a man who is junior to her. You see the same brand of sexism when Damini is called a prestitute by a bunch of protestors for her new controversial book. If the author was a man, would they call him a prestitute?

These women are not chaste individuals incapable of making mistakes or letting their insecurities lead them to pitfalls. For instance, Anjana finds herself in the middle of a kiss with her ex-husband who is now a married man. She also ends up in an affair with another married man, who claims to be in an open marriage. That doesn’t end well as she finds out that he was lying, but pretty much after his wife finds out about his affair. Damini, on the other hand, somehow gets back into the same love triangle with Dr. Warsi (Milind Soman) and Jeh.

But what really makes you think about while watching this show is the concept of equality in relationships. Anjana and Siddhi turned down guys who wanted to marry them. And while the men here felt played, the women were shown as not evil. So this makes you think about two things: 1) Not all men who aren’t ready to commit are evil and 2) Not every woman has marriage and kids on top of her list of goals. Also, the most important issue – why are men’s orgasms more important than women’s? If a woman is seen as an equal in sex and otherwise, she wouldn’t be lying there left high and wet. Siddhi would vouch for that!

The show has also explored LGBTQIA relationships beautifully. The best thing about the way they’ve portrayed Samara and Umang’s romance is that they don’t focus on it as a lesbian relationship but just a relationship. Being same-sex isn’t the highlight of their connection. Would you say a man and a woman are in a straight relationship? They really made a cute couple, probably the hottest in the show!

But what really made me feel happy and inspired at the end of 10 episodes is that these women are passionate, driven and yes, they have money but they’ve earned it! Except, Siddhi who is getting on her feet, which is a good thing. Each one of them has stood up for themselves. And here’s literally the best part of the show – it comes drenched in the sentiment of sisterhood and not just between the four ladies. The interaction between a mother and a daughter, a wife and her husband’s mistress, a woman with her husband’s ex-wife – there’s honesty and safety. These women understand the existence of misogyny in our world and stand by each other. Women aren’t competing against each other but giving each other a secure place devoid of judgement.

ALSO READ: If You Are Missing All That Office Banter, Watch Brooklyn Nine-Nine

In the end, Four More Shots Please! 2 makes you believe that it’s okay to not know where you’re headed. Your mistakes don’t define you. It’s okay to take chances. In the end, no matter how bad it gets, if you keep pushing forward, it will get better. Until then, build yourself an army of women who will always have your back!

ALSO READ: Friends Is An Old Show And Yet, We’re All Watching It During The Lockdown. Here’s Why The Show Is Still Relatable