Disha Patani Said She Could Barely Breathe In Her Tight AF Red Dress. Why Are We Still Trying To Fit Into Unrealistic Beauty Standards? 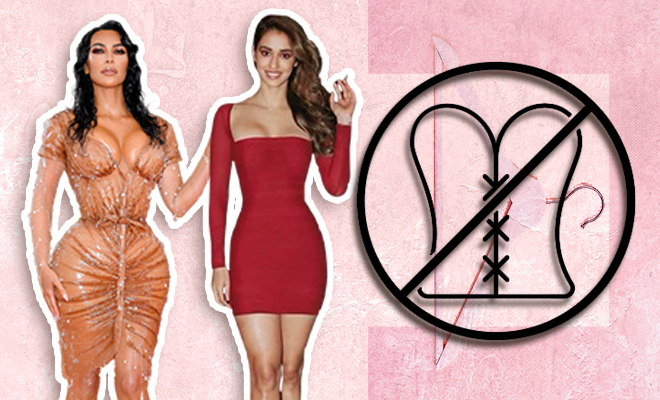 For centuries, women have been fitting their bodies into stiff structures that came to be called corsets. Why? To enhance their figures and fit into the unrealistic beauty standards of our forever misogynistic society. In fact, even before the 16th century, women of the tribes of Caucasus wore corsets from childhood till the day they got married. With at least 50 laces tightly cinching your torso, the corset served the purpose of waist-training and preserving chastity till your groom, one by one relieves you from the suffocation. Then came a generation of pioneering women who undid the century’s worth of damage and threw the corsets out of the fashion scene. You know because we are not plants, we don’t have roots and we definitely don’t want to be gardened into a particular framework.

Cut to today, we can tell all that was for naught. We may not be going back to the days of girdles but here we are, dressing to please as we throw comfort out of the window. Recently, Disha Patani turned up in a red dress at the success party of her film Malang. That dress was pretty no doubt but it looked like she had to let go of a couple of ribs to be contained in it. I mean she did not but some women have done that to reduce their waist size.

So when she posted pictures from the party, Tiger Shroff’s sister Krishna asked her which size she is wearing. She wrote, “Ordered the same one. Never came through in the mail though… What size are you wearing?” Replying to that, along with the size, Disha also gave her a heads up. “XS (extra small) but I would suggest small, breathing was only optional in this,” wrote Disha. I mean, I wouldn’t deny I have been there, done that but I wouldn’t do that again. It’s really not comfortable and I would rather look pretty and be able to breathe. These shouldn’t be mutually exclusive concepts.

Malang’s director Mohit Suri said that the film brought “Disha’s free-spirited avatar to light”. In this dress, her spirit is barely free! I am not dress-shaming her but I just feel all women must collectively refuse to go through painful measures just to fit into our society’s beauty standards.

Kim Kardashian’s MET Gala dress took things to a whole new level. It was so tight that she said she’d have to pee in her pants in case of a bathroom emergency. She also said that she couldn’t sit in that dress and that she has “never felt pain like that” in her entire life.

Kylie Jenner’s Oscar after party dress too was so tight that she couldn’t sit in it. However, she was praised both by media and netizens for choosing that dress over comfort. You know, because apparently being able to sit is overrated.

Women would rather look like a gorgeous installation and stand there, scarcely breathing and discomfort because why not. These women want actually give in to the unrealistic standards our society has set for us. And these weren’t set by women to please themselves or other women, even though this is used as an excuse rn to sound modern. These were set to impress and please men because back in the 16th century, women were not independent and the quality of their lives really depended on how happy their men were. But as soon as women started becoming independent, along with their corsets they left their need to please the men behind.

Here’s my sincere apology to those women because we are back to undoing all the progress they made. I mean, look at the outfits brides wear. They carry more weight than a lot of men lift at the gym and also look gorgeous while at it. We never volunteered to go through the period pain every month and we despise it so much. And then we turn up to parties and events and dates voluntarily going through pain just to be a pretty sight. But who said a comfortable dress is not pretty enough?

ALSO READ: Kim Kardashian Was Okay With Peeing Her Pants At The Met Gala. Okay, Let’s Not Go Crazy In The Name Of Fashion