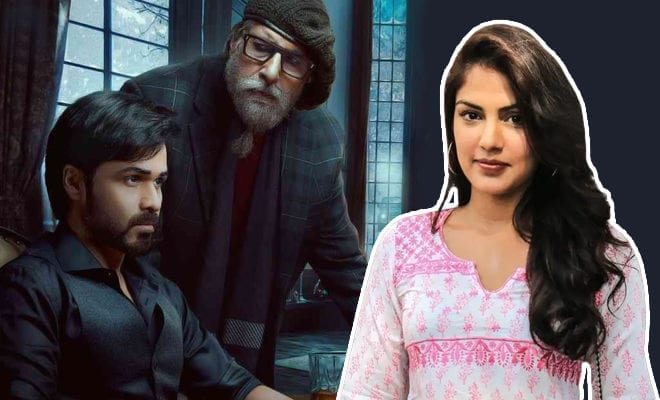 “My family’s not just been pushed to a corner, it’s been destroyed,” said Sandhya Chakraborty after her daughter and actress Rhea Chakraborty was finally granted bail by the Bombay High Court back in October 2020, recalling how their life turned upside down soon after actor Sushant Singh Rajput’s untimely death. Having been in the Byculla Jail for drugs-related charges in Sushant’s death probe, Rhea Chakraborty bore the brunt of a national outrage, boycott and scrutiny for merely existing. Until she was granted bail and it started to become clear that there had been no proof of her involvement in the actor’s death.

However, that didn’t stop the media and the industry from churning out content in the name of the actress for raking up their own TRPs. A practice that director Rumy Jafry is strictly keeping away from, as he begins the promotions of his upcoming film Chehre, starring Amitabh Bachchan and Emraan Hashmi along with actress Rhea Chakraborty.

The movie that was set to release last year but was pushed back due to the unanticipated breakout of the Coronavirus, was the topic of a lot of discussions, especially with speculations of Rhea being chucked out of it. But Rumy Jafry wasn’t one to leave his actor stranded as he announced his intentions to stand behind Rhea, neither casting her away from the movie or the trailers.

In an exclusive interview with a leading daily, Rumy Jafry spoke about the promotions of his film Chehre and how he wasn’t going to use Rhea Chakraborty’s situation to his own benefit by dragging her in front of media. He said, “As far as promotions are concerned, it’s our team that will decide who is needed for that. I don’t think with Amitabh Bachchan and Emraan Hashmi present, we would need anyone else for the promotions.”

He continued to say, “I don’t want to use Rhea’s situation for my commercial benefit at this point of time. If she is comfortable, we will give her some part in the promotional activities, but if she is not comfortable, then also it’s okay.”

Director Rumy Jafry confirms that #RheaChakraborty will be seen in the film!#Chehre https://t.co/QblmgpiN2K

With what went down with the actress, it is rather understandable for Rhea Chakraborty to want to be away from the limelight and from the clutches of the media that was almost inhuman towards her during her trial. It is good to see directors like Rumy step up and not bank on the actress’s personal life.

GET HAUTERFLY IN YOUR INBOX!
Related ItemsFeaturedTrendingrhea chakrabortychehreRumy Jafry ChehreRumy Jafry says he does not want to use Rhea's situation for his own benefitRhea Chakraborty Chehre