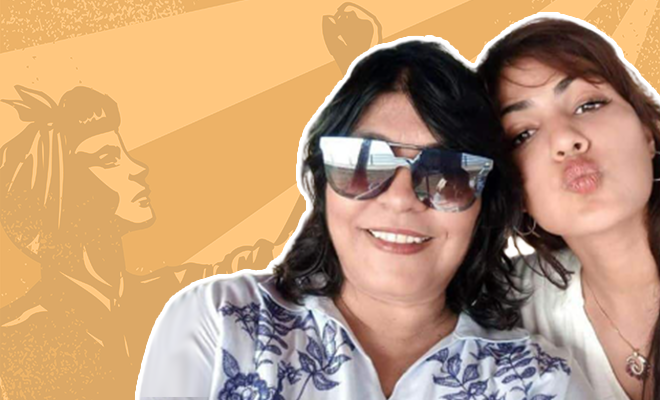 Rhea Chakraborty’s Mom Sandhya Chakraborty Speaks About The Mental Trauma Her Family Is Going Through, Calls Rhea A Fighter.

Warren Buffett, the rich and famous business tycoon, once said and rightly so, how “It takes 20 years to build a reputation and five minutes to ruin it. If you think about that, you’ll do things differently.” And off late, I’d have to admit, I have been indeed thinking about it a lot. Especially in the case of actress Rhea Chakraborty, who had her life thrown upside down after the passing away of her boyfriend, Sushant Singh Rajput.  As of today, his death has been ruled a suicide and Rhea has been granted bail, but what is still far from getting restored is her life, her peace of mind, or her mental health, all which were mercilessly attacked these past few months. Rhea Chakraborty’s mom has spoken up about the mental trauma.

From being chased down by paparazzi, to being at the receiving end of national blame and hate, Rhea Chakraborty was treated like a murderer even before the court proceedings had started, or evidence even evaluated. Because it was a man who lost his life, and because she was a woman who could be conveniently blamed for it, she was publicly declared a monster and treated like one, up until recently when the Bombay High Court observed the narcotics charges against her said it wasn’t so grave and offered her bail. But there is more to what she needs to be offered now, and that is some space and peace from the entire fiasco.

Rhea Chakraborty’s mom, Sandhya Chakraborty who saw her children  get dragged through the mud, lynched at in public spaces and blamed for crimes, spoke about what this bail meant for them and shared, “Rhea’s father was on the verge of collapse yesterday. What she has gone through… how will she heal from this? But she is a fighter and she must be strong,” she told TOI.

Take some rest girl nd come back with same strength and energy 💪@Tweet2Rhea More power to you ❤️ pic.twitter.com/YmK8rEHQbK

Also Read : We’ve A History Of Blaming Women When Men Kill Themselves. First It Was Rekha, Now It’s Rhea

Opening up about the extent to which she thinks Rhea has been traumatised, she said, “I will have to put her on therapy to help her get over this trauma and reclaim her life. While it’s a relief she’s out of prison, it’s crazy it’s still not over. My son is still behind bars and I’m paranoid about what tomorrow will bring.” And we can only imagine the anxiety and fear that would’ve gripped her.

Rhea Chakraborty’s mom went on to talk about how it was the scare of contracting corona, or being chased down my media, and that kept the couple cooped up in their apartment. She said, “The last time my husband stepped out to meet the ED, he was hounded on his way back. And he’s not the kind to fight back. We panic every time the doorbell rings. We don’t know who it might be. There have been instances of reporters posing as CBI or as a resident of the building to come into our premises. We’ve installed CCTVs outside our door to secure ourselves.” Clearly, the concept of personal space flew right past people’s head who went to such extremes for a media byte.

Sandhya Chakraborty, the mother of Rhea Chakraborty said her daughter could sit back for a while and recover from the “slander” and nightmare of “being lynched” by the country at large. The nation owes her an apologyhttps://t.co/Vze35X0OIL

"Rhea @Tweet2Rhea is the strongest woman I have met, she is a tigress." says, her lawyer, Satish Maneshinde, when I ask about her mental state after one month in jail. "She is getting ready for the next fight". Full show: https://t.co/EhgSnhcr05 pic.twitter.com/2NxLekBrnX

Admitting to going through mental distress herself and tackling suicidal thoughts, she said, ““I can’t sleep on the bed anymore when my children are suffering in jail. I can’t eat. I wake up in the middle of the night, gripped by a fear of the next thing that could go wrong. My family’s not just been pushed to a corner, it’s been destroyed. At one point I thought the only way to end it was by ending my life.” Heartbreaking to hear, for her grief was almost tangible through her words.

“I’m not this kind of a person, you know. I’ve sought therapy for myself. Now when these feelings appear, I keep reminding myself I need to be there for my children. They’re going through far worse,” said Rhea Chakraborty’s mom, Sandhya trying to keep calm and stand strong. She also went ahead to support her daughter Rhea and stand for her pride, as she shared, “We’re proud of our daughter. She’s maintained her poise and dignity even as she was pushed around, called names and landed with scratches on her face on way to the ED office. Yet, even after she came home today, she looked at us and said: ‘Why do you look sad, we have to be strong and fight this’.”

Hopefully, her words go through to the people who put out baseless conspiracy theories, indulged in breathless keyboard wars and take some responsibility for a life they have unequivocally ruined. We hope Rhea and her family can finally take this time to start with their healing, while the media and public shamefully retract to respect their personal space.