D*ck Pics In My DMs: Teena Singh, Of The Kabir Singh Fame, Puts Up Screenshots Of Sleazy DMs. But What Triggers These? 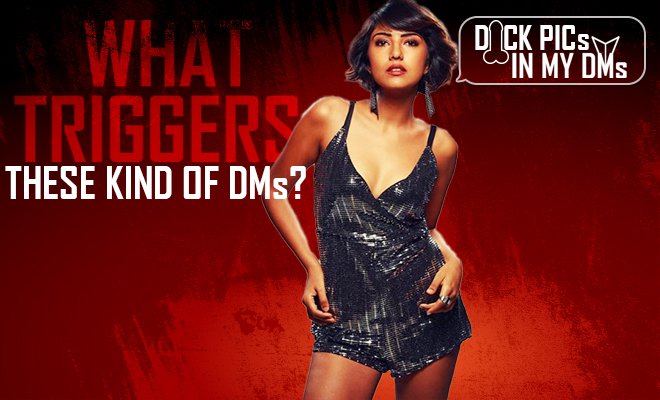 You could be the most easy-going, fence-sitting woman on the internet and still be subject to the most vile comments. Because, unfortunately, the internet offers anonymity. At least to a certain degree. And this is for regular women who aren’t even famous. For women who are stars, we are willing to place bets that they don’t even check their DMs because it is filled with the kind of vitriol that can make eyes bleed.

For an average woman, it can mean an occasional comment on her body and sometimes, a penis picture. We are yet to meet a woman, any at all, who has decided that her prince charming will be the guy who decided to send a phallic polaroid. But maybe we don’t meet enough women. *shrugs*

Teena Singh acted in Kabir Singh and this role put her on the road to success. And in today’s times, this means that she has quite a following on Instagram. Like any other star, this 26-year-old put up pictures of herself from shoots, magazine covers and holidays. Nothing out of the ordinary, you would think. But then, a quick peek into her DMs and that’s where it all gets real ugly.

And while most women would just let it slide, Teena decided enough was enough. She wasn’t having any of this. So she started putting up screenshots of the DMs she got. And if you think that’s cool, wait till you hear what she did next. We got chatting to her and caught up with her (digitally, of course) to understand how she escalated things, even getting the cyber cell involved.

What Triggers These DMs?

Teena said it’s literally nothing you do. Of course, since she’s famous, she gets a lot of DMs but it’s nothing she does or doesn’t do that causes men to send her penis pictures. She says, ‘I will get messages from men and they usually start with ‘Hi baby, you’re so sexy.’ Or ‘ I think you’re very hot’. Some will describe in detail what they want to do to me which go from the run-of-the-mill ‘I want to squeeze your boobs’ to some weird ones like ‘I want to lick your legs.’ When I ignore these, which I do, they seem to think it’s a personal affront. They go into ‘fuck you,’ ‘you think you’re very sexy’ or ‘Randi, you’re a whore.’

Basically, when these men with no concept of consent, get ignored, they get offended and get progressively more violent and abusive. Protected by the anonymity the internet offers, they tend to get bolder- sending not just dick pics but more. Teena says, ‘One guy even sent me a whole video of him shagging.’

Besides putting up screenshots, Teena also does some research on these boys. She digs up details, a half an hour job, she says and once she gets information about the people this person knows, she sends the screenshots to them. To their moms, sisters, wives or girlfriends. And this is almost always followed by an apology from the guy.

But Why Don’t You Block Them?

You would think that the easiest way to get rid of the vermin is to block them. Of course, Teena tried. She says, ‘If you block one account, they make another one and stalk you from that one.’ So yeah, that doesn’t work. And it doesn’t stop at blocking one of them, it’s like a gift that keeps on giving. Just how many can you block? As is obvious from the post above, they don’t stop at abusive content in the DMs, they body shame her, asking her why she puts up pictures of herself in clothes this person deems inappropriate. It’s her Instagram account, she can post whatever the fuck she wants. If you’ve a problem with it, don’t follow her. It’s simple, you would think. But it’s not.

It’s So Bad, It Qualifies As Cyber Bullying

While chatting, Teena mentions this recent episode where a memer (a guy who owns a meme page) sent her what he thought was a ‘sarcastic’ DM. It’s a disgusting one, even if it was a joke. She reported this to the cyber cell. But what followed is nothing short of cyber bullying. This guy probably has some clout and all of his ‘friends’ got together to hijack her DMs and her post to tell her she was wrong to expose him like that. Comments about how she has manipulated the cyber cell, about how she’s playing with the mental health of this individuals, all of them are there. The comments are nefarious and it’s systematic harassment. Someone even asked, ‘what if he commits suicide?’. Teena says,’If you’re old enough to be this bold and graphic, you are old enough to face the consequences.’ And she’s right.

While there are plenty of women who love and support other women on the internet, Teena is one of the women who is boldly taking on the brazen men who think they can get away with anything. And we love her for it.

D*ck Pics In My DMs is a four part series with Teena Singh where we talk about everything awful in her DMs and how she’s dealing with it, her advice to other women and much more. Stay tuned. Every Friday.