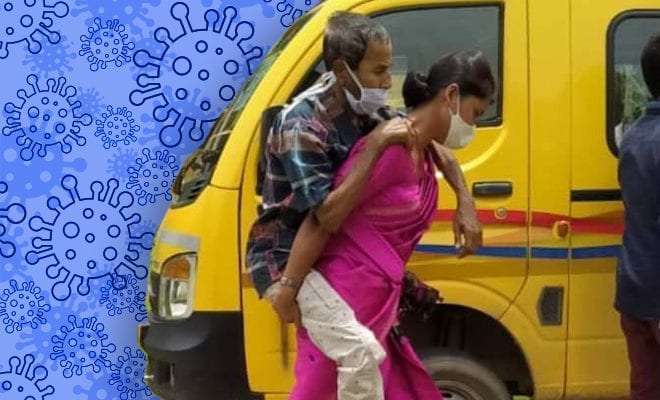 In today’s day and age, there are several ways in which one person can be famous. Where once it would be reserved for the actors, actresses, journalists or big and successful businessmen and women, today with social media in the picture, fame is as easy as a post gone viral on the internet. But it’s not always for happy reasons. Just like this Assamese woman named Niharika Das got famous and was celebrated on Twitter just last week after a picture of her carrying her father-in-law on her back went viral. Though the gesture is worth applauding, the fact that she had to go through that is appalling.

While people lauded her for her strength and devotion given that she was photographed carrying her ailing and Covid positive father-in-law on her back, it is worrying that no one came forward to offer her help. She carried her father-in-law till she reached an area where conveyance would be available.

The incident took place on June 2.  The 24-year-old Assamese woman’s father-in-law Thuleshwar Das was a nut seller in the Bhatigaon village in Raha had started showing symptoms for the virus and had to be taken to the nearby community health center. Niharika, who was alone at home with her husband away in Siliguri for work, managed to take the responsibility upon her and even arranged an auto-rickshaw for him to be taken for a check-up.

In an amazing display of women-power today, Niharika Das, a young woman from Raha, carried her COVID positive father-in-law, Thuleshwar Das, on her back while taking him to the hospital. However, she too tested positive later.
I wish this inspiration of a woman a speedy recovery. pic.twitter.com/pQi6sNzG0I

Also Read : Odisha Woman’s Video Of Horse-Riding Wearing A Saree Goes Viral. This Is A Sight To Behold

She shared, “But my father-in-law was too weak to even stand up. My husband was away at work in Siliguri, so I had no choice but to carry him on my back and take him to the vehicle parked at a distance.” However, her struggle didn’t end there. When she reached the health center, she was then instructed to take her father-in-law 21 kms away to Nagaon for his conditioned had worsened.

She narrated, “So we had to call for another private vehicle. There was no ambulance, or stretcher, so I had to carry him to the car again. People stared, kept a wide berth from us, but no one offered to help. My father-in-law was almost unconscious and it took me a lot of strength — physically and mentally to carry him.”

After the authorities at the hospital too dismissed them by saying they weren’t equipped enough to take care of her father-in-law’s situation, she then took him to the Nagaon Civil Hospital. “Finally, we were referred to the Nagaon Civil Hospital. Even there, I had to carry him on my back up to three flights of steps. I asked for help but no one was available. I think I must have carried him for 2 km in total that day,” shared Niharika.

Can we just not romanticise their misery? It’s an utter failure if one has to carry a patient on their back due to lack of money and government facilities. What does that describe? @himantabiswa @keshab_mahanta

Niharika Das has set an example of templating ideal nurturing her father-in-law at this trying times despite suffering from covid..It shd be a model for all daughters regardless being considered as daughter-in-law..I do salute Niharika Das n wish both of them a prompt recovery..

Also Read : A Video Of A Woman Making Rotis Has Gone Viral Because Of Her Smile

And while people may have saluted her perseverance and hailed her spirit, to the point of drawing inspiration from her from that one picture, Niharika Das who later tested positive too, shares how she felt broken from inside in that moment. “Of course, I am happy that people felt good seeing the picture. Through the photo, the only message I want to send is that people should help each other– whether it is your parents, in-laws, or even strangers,” said Niharika. She also said, “It may not show in the photo but I was feeling lonely and totally broken.”

Going on to mention how poor the state of infrastructure of this country is, she went on to say, “When I was stuck, an ambulance could have helped a lot. We took him to hospital in a small van for hire. Luckily, he did not require oxygen on the way — if he did, he would surely have died.”

Nothing to rejoice actually . It reflects the dilapidating infrastructure ,which compelled her to do so

Failure of govt to provide basic human needs and you are romanticising it? Shame.

Recalling the time when her father-in-law gained consciousness, the Assamese woman said, “When he was conscious, I even showed him the photos of us which went viral. He was shocked and concerned about what people would say. I told him that people were actually praising us. He then joked and asked me where I got the strength to carry him.”

Niharika made a valid point with her words. People need to look closer and see through the virality and strength that the picture of her carrying her father-in-law depicted, to notice the real problem – which is lack of resolute infrastructure and empathy. This is a cry for help, not a sight for motivation.