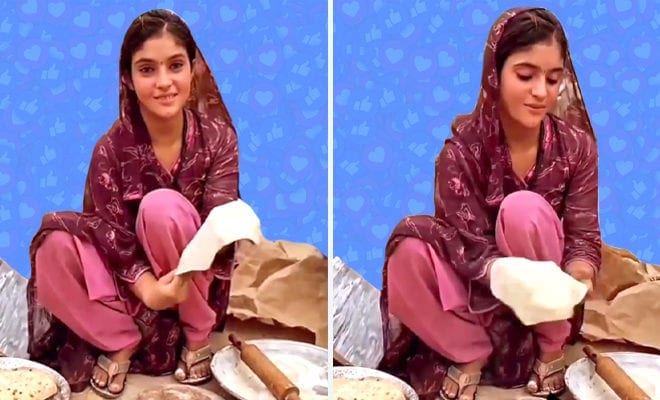 There are a lot of times I have sat back and wished for God to grant me superpowers, like reading a mind or something. Of course by that I don’t mean that I have actual superpowers like Superman, but that I’ve come to recognise one that I had all along – social media. Enough to give you the kind of fame one could only dream of and that too overnight, social media is turning out to be the new fairy godmother, atleast for this girl who  has gone viral for making rotis!

Videos of a young girl making rotis sitting out in the open, in what seems like the backyard of a house, have gone viral making the netizens go crazy after just how beautiful and mesmerizing she looks.

Dressed modestly in a salwar kameez and a dupatta on her head, the girl looks like she hails from a village. Any other information about her from her name to her whereabouts are all still a mystery, but what isn’t is her infectious smile and her roti-making skills.

Also Read : Priya Prakash Varrier Gets Challenged By Deepika Padukone In Her Own Famous Wink And Smile!

The account through which her videos are being shared is being run anonymously and has posts of several other women. The video as it starts recording doesn’t alert the girl on being recorded, however later when she looks up and realises that she is being recorded, she smiles while still making her rotis.

Her posts have already garnered over 2 million views and the account has almost 95,000 followers with people continuously dropping comments that show just how in love they are. One user wrote, “Natural beauty awsome” while another one questioned where she was from. A question to which several hundred seek the answer of.

Meanwhile here is hoping that we too, someday get to go viral for doing our daily chores or you know, making rotis!

Also Read : Video Of A Woman Doing A Headstand And A Split In A Saree Goes Viral. Such A Star!