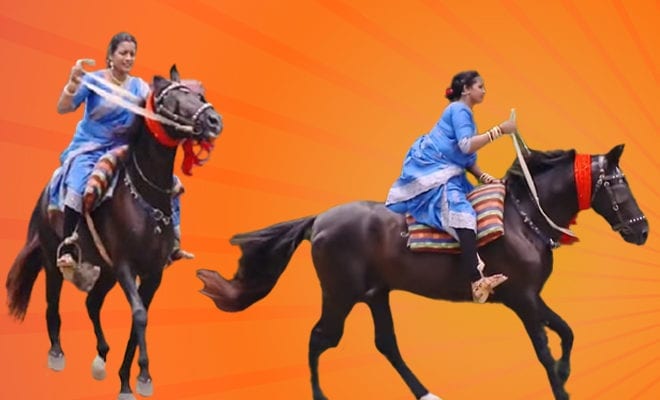 Odisha Woman’s Video Of Horse-Riding Wearing A Saree Goes Viral. This Is A Sight To Behold

Each time I go on the Instagram app, I am bombarded by so much content – some of it refreshingly original and some of it being so done to death it almost feels like déjà vu. I mean, I see one quote or a meme of a page, it goes viral and then I see it popping up on every meme page. Similarly, sometimes the Instagram trends lack originality with many content creators forgetting to add their own personality to the video. It is challenging though and everyone can’t make all landmark content. However, amidst all that, when we come across a video so refreshing and unpretentious, it’s just heartening. Recently, the video of a woman riding a horse wearing a saree got viral as people watched the air of confidence she exuded with each stride.

Monalisa Bhadra hails from Jahal village in Odisha’s Jajpur district and seems to have taken YouTube by storm with her wholesome videos. In this one, you can see her riding a horse, like a queen as people around her are mesmerized but also unperturbed, almost as if they expect such things from Monalisa.

And why wouldn’t they? If you sift through her YouTube channel, you will find several videos of her exhibiting her unmatched swag – be it while riding a horse, a bullet bike or a truck! And she does all of that in a saree!

The video of her riding a horse was uploaded just a week ago and it already has more than 63k views on YouTube. The one with her riding a turbo truck has around 20k views. From a homemaker to a YouTube star, Monalisa’s simple yet poised videos got her more than 2 million subscribers so far.

Often the rural societies in India are conservative and more patriarchal than the metro cities, although that’s not a rule. But Monalisa has had the opportunity to explore her talents and skills and she credits her husband for it. Her husband is a social worker and also the man behind the lens for all her videos. He supports her and encourages her through it all.

You know how they call a supportive husband “joru ka ghulaam” and the woman “controlling”, I think like him, couples should just stop paying heed to these bearers of negativity and just be kind to each other. I feel that’s a strategic way of deterring men from being nice to their wives, or at least not being oppressive.

ALSO READ: This Woman Did A Perfect Somersault While Wearing A Saree. Meanwhile, I Can’t Wear One Without My Mother To Help Me

Having said that, I hope she continues living her life queen size, carrying her swag around in a saree and shattering gender stereotypes while at it!

ALSO READ: This Woman Went Skiing In The USA While Wearing A Saree. We Love Everything About This!