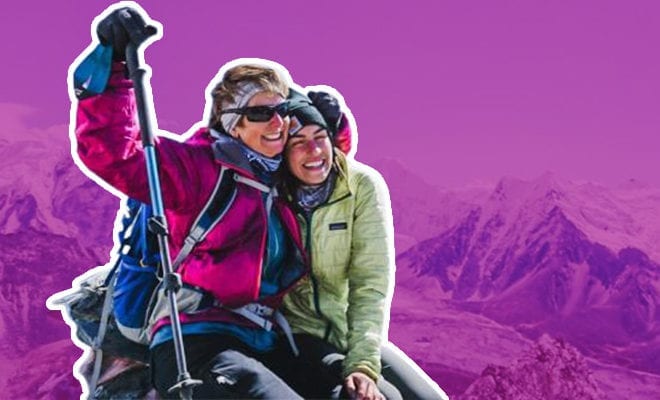 After Beating Cancer, US Woman Scales Mount Everest With Her Mother

Every morning, the first thing I do is go through the news. Since it’s my job to be well informed and stay on top of current affairs, I don’t really have a choice. There was a time though, that this exercise used to be fun. Now, all I read about is the pandemic, political upheaval and people behaving like utter covidiots. However, today was different. Amid all those tales about death and destruction was a story about hope, resilience and strength in the face of adversity. You see, a woman who after battling cancer scaled Mount Everest with her mother. It’s just so wholesome!

For most mountaineers, scaling Mount Everest someday is their life’s mission. But for this mother-daughter from duo Oklahoma, USA, it was simply about having an adventure and spending time with each other. Especially considering they’ve already overcome the greatest battle they will ever face, cancer. Valari and Jess Wedel hope to become the first American mother-daughter team to reach the summit of Mount Everest, the highest peak in the world.

Speaking to CBS News from their base camp, which is at an elevation of 17,600 feet, via Zoom, Jess said that their purpose to climb Mount Everest is not only about reaching its peak. She said, “The possibility exists that we can get there and that would be amazing. “But if we’re not enjoying every single moment along the way, then we’ve missed the point almost.”

Everyone knows that scaling Mount Everest is a massive and brutal undertaking. Jess and Valari’s journey was not easy. Even though both of them are very experienced climbers, Valari is 61 years old and she suffers from asthma. On the other hand, Jess was diagnosed with ovarian cancer in 2016 and has had multiple surgeries and rounds of chemotherapy. She is now cancer-free!

They started their Mount Everest trek weeks ago and have already weathered the worst storms. The mother-daughter duo told CBS News that they withstood 60 mph winds with whiteout conditions for 43 hours. Despite the horrific conditions, the two are having the adventure of a lifetime together.

Jess said, “It feels like part of our healing was coming into the mountains and being able to enjoy each other and have fun and just live life. When we say we live every day, we really do because we have been in a place where we didn’t have maybe the next day.”

We are in awe of their feat and hope that they successfully reach the peak of Mount Everest. More power to them!