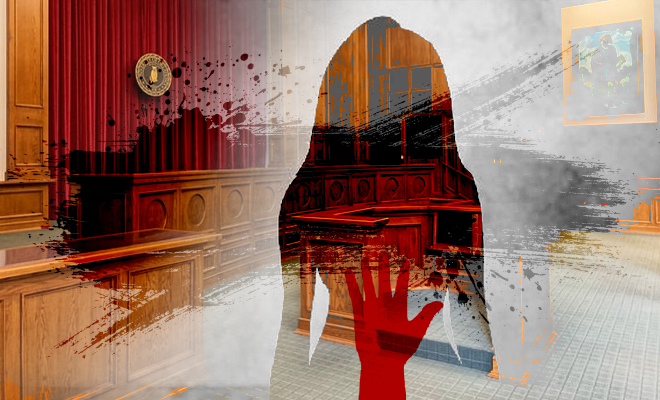 A Woman Got Raped Inside A Courthouse By A Staff Member In New Delhi. Women Aren’t Safe Anywhere

Often, our sense of threat or safety depends on where we are. I don’t take my rickshaw from dark, secluded alleys because I am scared – who knows if someone is waiting in the shadows or if the driver decides to make a devious stop. If it’s really late on a Saturday night and the streets are crowded, there’s traffic and police patrolling everywhere – it makes you feel safe. When you’re in a defence area or with a police station in your periphery, you feel like nobody would dare touch you. But it seems like we’ve been all wrong all along.

A 38-year-old woman was allegedly raped not in dark alleys but inside a courtroom – a place that’s meant to stand for justice – in New Delhi, by an employee. The woman was at the Rouse Avenue Court Complex when she was allegedly sexually assaulted by a staff member.

The woman called up the Police Control Room and reported the rape. After a medical examination, the accused was arrested. “We received a call at our PCR control room, our team from IP estate police station responded almost immediately. The medical examination of the victim was conducted. She narrated her entire ordeal, post which a case under section 376 (rape) was registered. The accused was identified as Rajendra Singh and arrested by the team,” Times Now quoted a senior police officer.

She revealed that Singh had said he’ll help her with her pending case in a labour court. Under the pretext of helping her with the case, he took her to a room on the third floor and allegedly raped her. The court complex had opened just last year and the floor was recently allocated to tribunal and labour courts.

In fact, Singh was known both to the rape survivor and her husband. Usually, attackers aren’t those hiding in dim corners waiting to pounce on women. In most cases, the rapist knows their target and takes advantage of the trust factor to isolate them. According to the data released by the National Crime Records Bureau (NCRB) in 2019, a shocking 93.1% of the cases were done by someone familiar – a family member, an ex, online acquaintances, friends of friends, relatives, etc.  In 2015, the percentage was almost 95. And this isn’t a story exclusive to our country but to all over the world. In Scotland, it was reported that only 9 percent of rapes were by strangers.

ALSO READ: In Coimbatore, An 11-Year-Old Girl Was Raped By Three Minor Boys In Her Own House. The Criminal Is Getting Younger

So when guys go around feeling butt hurt about women not blindly trusting them, do they understand that we don’t have a rapist detector and we can’t risk our safety? You refuse to go home with someone you haven’t known for long, and they tell you jokingly ‘relax, I won’t rape you’. You refuse to take a lift from someone you don’t know too well, and they tell you, ‘Not all men are the same.’ Yeah, not all men are rapists. But we don’t know which acquaintance can be one and I’d rather not wait to find out. It’s infuriating to have to live in so much distrust and always be alert for your safety. And now apparently, you can’t even feel safe in the house of justice.

ALSO READ: IAS Officer Rapes A Woman, Gets Suspended And A Case Is Registered Against Him. But With Our Judicial System, Will Justice Be Served On Time?