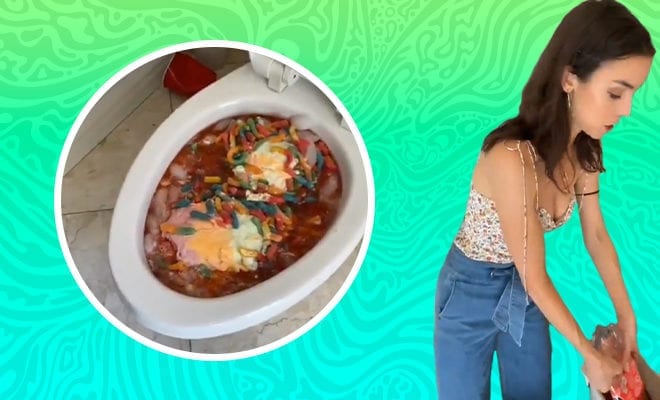 As much as I love parties, I have one rule that I religiously follow. Under no circumstances, do I accept a drink from a stranger. Or even a drink that hasn’t been made in front of me. This is something my mother taught me. And until today I thought it was to ensure the drink doesn’t get spiked. But there are more uses to this rule than just that. If you aren’t vigilant with your drink, someone is going to hand you something made in a toilet and you’ll never know. I wish I was using this as a metaphor but I am being very literal. It actually happened. This woman, who is going viral, made a party punch in her toilet (in the WC!) and served it to her friends. This is so utterly disgusting. Just thinking about it makes me want to barf. Although I do want to laugh at the clueless people who actually drank this punch.

This woman, for some reason, decided to make a party punch for her friends in her toilet bowl. Maybe she ran out of actual bowls in her kitchen, who knows? A video of her filling her pot seat with ice, sour candies and ice cream and numerous aerated drinks has gone viral. But she didn’t put the sodas in just by themselves. No. If it wasn’t already disgusting enough that she was using her toilet bowl as a mixing bowl, this woman decided to pour Sprite and Fanta in the cistern, along with some more sweets and then flush the toilet. Why must people be so gross? Hopefully, this was nothing more than a horrid prank.

Also Read: In A Viral Video, Man Seen Spitting On Dough To Make Rotis At Meerut Wedding. This Is Extremely Disgusting!

The viral video was created by musician Taylor Watson who reportedly appears to be part of a Facebook prank network. She first clogged the toilet bowl with a T-shirt and started pouring ice, loads of sour candies and two entire tubs of ice cream. Then she proceeded to fill the cistern with Sprite, Fanta and more sour candies. She then flushed the toilet making the fizzy drinks submerge the ice, candies and ice cream. Finally, she just scoops up the drink and pours it into glasses with the intention of serving it to her guests who are shown standing just outside the washroom.

Just like us, netizens to are utterly grossed out by this. Even if it is a prank, it’s a horrible and unforgivable one. What inspired this woman to make a drink in a toilet and then serve it to people? Is she that big of a misanthrope? Or has this lockdown left her just that bored? Merely the thought of that drink is making me shudder with disgust.