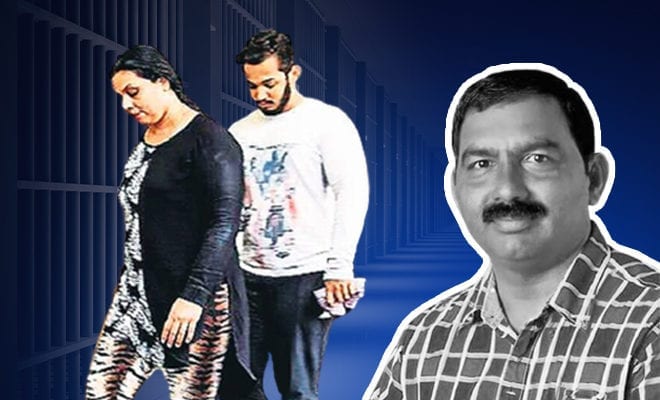 A Story Of Murder And Affairs In Karnataka. A Hotelier Murdered. Wife, Son And An Astrologer Have Been Sentenced

In the short time that I have spent as a journalist, I learned that there are only four possible motives behind most crimes. Money, sex, power and love. These four aspects in the hands of the wrong people are very, very dangerous. Think about all the heinous crimes you’ve read about, in novels or newspapers. You will be able to chalk up each one of them to one or more of those four aspects. It’s how the world functions. Today, we are talking about a rather high-profile murder. In 2016, the wife, son and an astrologer came together and murdered Bhaskar Shetty, a wealthy hotelier. They have been sentenced to life imprisonment for their cold-blooded crime.

50-year-old Bhaskar Shetty was the owner of Durga International Hotel in Udupi, Karnataka. He also owned several other properties in that area and seven supermarkets in Saudi Arabia. In July 2016, he was found murdered in his own home. Soon, the police started suspecting Bhaskar’s wife Rajeshwari Shetty and his son Navaneeth Shetty. Rajeshwari’s friend and astrologer/priest, Niranjan Bhat, was also a person of interest in the murder case.

The murder happened merely two months after Bhaskar returned to his family after working in the Middle East for many years. On July 28, 2016, Bhaskar left his hotel, Durga International, and was about to return home. He was not to be seen after that. His car and the shoes he was wearing at the time were found at his house. Hence, a missing complaint was filed by his mother. CID, who was in charge of the investigation, claimed that Rajeshwari, Navneet and Niranjan murdered Bhaskar for his money and then burnt his body at Niranjan’s house. Reportedly, Niranjan and Rajeshwari were having an affair. Niranjan’s father, Srinivasa, was also accused of being an accomplice in this murder. But he died during the trial.

Bhaskar Shetty, 50, the owner of Durga International Hotel in Udupi apart from several properties in the region and seven supermarkets in Saudi Arabia, was murdered at home.https://t.co/ePCWMk9x3l

Also Read: This Woman From Mumbai Murdered Her Husband With The Help Of Her Lover And Buried His Body In Her Room

Witnesses told the police that they saw Navneet hitting his father, a few days before the murder, at the hotel. Bhaskar’s family said that he was going to leave all his properties to orphanages and his mother. His wife and son stood to inherit nothing. This was considered to be the driving motive behind the murder. Announcing the sentence on Tuesday, Udupi Principal District and Sessions Judge J N Subramanya found these three guilty of murder. The court said, “The accused have been sentenced to life in prison for the offences of murder and criminal conspiracy (IPC 302 and 120 B) and four years rigorous imprisonment for destroying evidence (IPC 201).”

I think there is a popular saying that applies here very well- “Crime doesn’t pay”. It means committing a crime never benefits anyone. It only brings more trouble. We are glad that the three accused will be punished.

This 19-Year-Old Boy Murdered His Live-In Partner In Mumbai. The Criminal Is Getting Younger