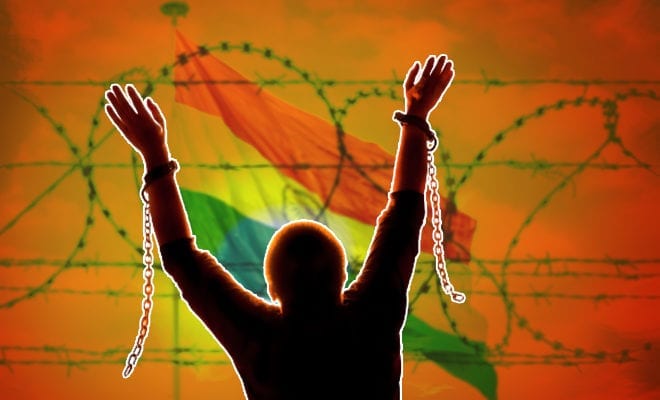 This Hyderabad Man Accidentally Crossed The Border And Spent 4 Years In Jail. All Because He Wanted To Meet His Girlfriend

One questioned that has always swirled around in my head is, how far is too far in love? Blame it on the Bollywood movies that I have grown up watching or all the Nicholas Sparks books that have fed my heart with hopeless romanticism, but I always wondered about the kind of love that makes you cross borders and endanger yourself to just see your loved one once really even exists. And for some lucky lovers, this love story has a happy ending. Nope, not the kind that you get a Thai massage place.

We say this after coming across a story that recently made the headlines after a man who had gone missing since 2017 finally returned home after having been detained in Pakistan for crossing the border illegally. Why had he gone there? To meet his lover.

Waindam Prashant, a 32-year-old man has finally returned to India after having spent 4 years in a prison in Pakistan. Turns out, that the Telangana based IT professional was caught on charges on illegal entry in the country of Pakistan and detained by the authorities upon being caught.

Allegedly, Prashant did so in order to be able to meet his lover girlfriend for which he was trying to travel to Switzerland. Except, he did so by crossing the border without any legal documents or authorisation and was so caught Bahawalpur police along with another person.

Also Read : Hyderabad Girl Gets Placed With Microsoft With A Salary Package Of ₹2 crores! This Called Me Underpaid In So Many Ways

A video of Prashant had also gone viral on social media that could capture him narrating his love story wherein he shared how he was in Pakistani prison while trying to go to Switzerland to meet his girlfriend. This video soon reached till the parents of Prashant who then filed a missing persons report for their son who had been missing since April of 2017.

With the help of Madhapur Police that tried to track their son as best as they could, the father of Prashant also reached out to Sajjanar who further wrote to the State government and Ministry of External Affairs seeking his extradition from Pakistan. Sajjanar shared, “After serving his sentence in Pakistan, he was handed over to Indian Immigration Authorities at Attari border yesterday. Today we brought him to Hyderabad. We handed over Prashant to his family members.”

Prashant who thanked the Telangana government and External Affairs Ministry to help bring him back to Hyderabad shared that he was treated well in the Lahore prison and how all those years back, even though he thought crossing the border to meet his love on foot would be an adventure, it was actually a rather unaccounted for and foolish move.

Also Read : Woman In Hyderabad Drank Sanitizer After Getting Into A Fight With A Friend, Died.