A 16 YO Boy From Gujarat Confessed To Threatening MS Dhoni’s Daughter With Rape. Is This What We Are Teaching Our Boys? 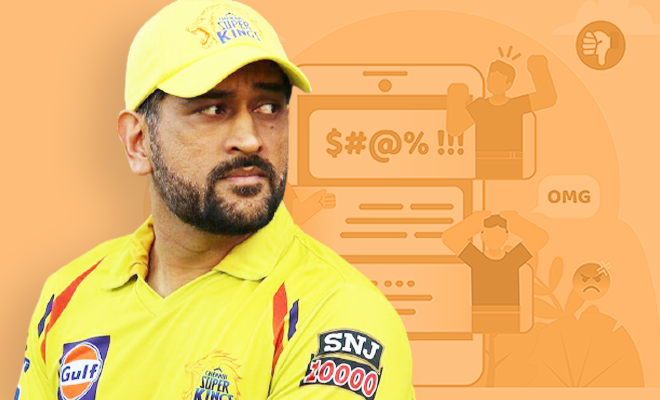 A few days ago we spoke about how Mahendra Singh Dhoni’s 5-year-old daughter, Ziva received rape threats on social media. This came after his IPL team, CSK, lost a match. It’s becoming harder and harder to digest the kind of vile society we live in and just how deep-rooted the whole rape culture is. If a 5-year-old little girl can get rape threats, where does that leave the rest of us? Anyway, the police did manage to catch the boy who posted those comments. Here’s the shocker. He is 16-years-old.

As I have said earlier, cricket has stopped being merely a game. It has now turned into a breeding ground for misogyny, dirty politics and well, now we add violence against women to that list. But all of it is mostly overlooked because Indian’s are beyond obsessed with the sport. Not to mention that it’s not a new concept for people to blame cricketers wives or girlfriends when they fail to perform on the pitch. Just ask Virat Kohli and Anushka Sharma. I am sure they’ll have a whole speech already prepared. But this time, this 16-year-old kid, took it to a whole new level by threatening to rape MS Dhoni’s 5-year-old daughter because he lost a CSK v/s KKR match. Is this what we are teaching our sons?

When I first read that the police have arrested a 12th-grade student in connection with this case, It gave me Bois Locker Room flashbacks. I mean, a teenager posts such horrid comments about a 5-year-old girl on Instagram because her father lost a cricket match. Not only does it sound absurd it reflects all the ways in which we are going wrong while bringing up our boys. It’s messed up.

This 16-year-old boy hails from Gujarat and a few days ago he was nabbed by the Kutch police for posting those horrendous comments about Dhoni’s daughter on Instagram. After questioning, the police released a statement saying that the teenager had confessed his crime of cyberbullying and threatening to rape a 5-year-old girl. The boy will be handed over to the Ranchi police since that’s where the FIR was lodged.

This makes my blood boil. But I think the million-dollar question is why was rape one of the things that crossed his mind? A 16-year-old kid thinking of rapes, for such trivial matters no less, is terrifying. How are we supposed to build a safe environment for our daughters if the boys aren’t educated enough to know the difference between right and wrong? But then again, they won’t be held accountable anyway, right? How can they be? Our entire society is working to put the blame of rape on the shoulders of the victim.

Anyway, it’s wasn’t long after this 12th-grade student posted those comments that they went viral. This kind of BS happens more often than we would like to admit but it’s not everyday MS Dhoni’s daughter is on the receiving end. One of the people who commented on this unfortunate situation was Shahid Afridi, the former captain of the Pakistan cricket team.

Shahid Afridi "I don't know what sort of threats were directed at MS Dhoni & his family but it's not right & shouldn't happen. Dhoni's the person who has taken Indian cricket to new heights. He's taken junior & senior players along this journey & doesn't deserve such treatment"

Afridi was quoted by a Pakistani journalist on Twitter talking about these threats. He said, “I don’t know what sort of threats were directed at MS Dhoni & his family but it’s not right & shouldn’t happen. Dhoni’s the person who has taken Indian cricket to new heights. He’s taken junior & senior players along this journey & doesn’t deserve such treatment.”

Of course, we completely agree with Afridi. Dhoni is one of the best cricketers we have but this is so much more than that. He doesn’t deserve to have his daughter threatened, yes. But then again, no one deserves this treatment. No circumstance would justify these kinds of threats. This entire troll culture that is alive and active right now is a menace. It serves as a platform for boys, with half-baked knowledge, to spew their hatred and bullshit around. Cyber-bullying Dhoni by threatening to rape his daughter is way beyond unacceptable. Sending out rape threats to anyone is. How thick-skinned do you have to be, to not see just how disgusting and messed up this is?