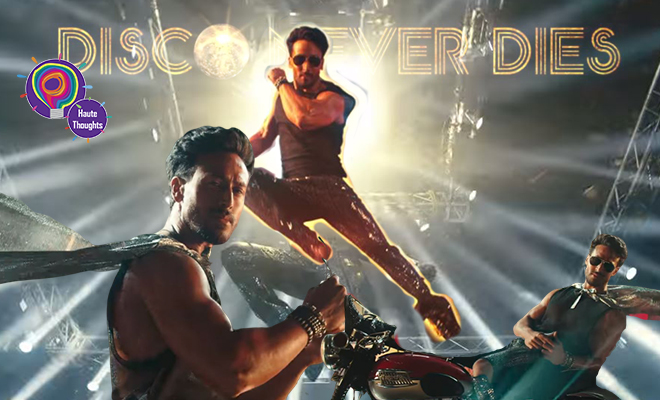 5 Thoughts I Had While Watching Tiger Shroff’s I Am A Disco Dancer 2.0. Definitely Ki, Ek Aur Remix? No!

Ladies and gentlemen, today I saw something that made me want to poke my eyes and stuff cotton balls in my ears. Yes, it was indeed another Tiger Shroff song that had no head nor tail. His latest song is called I Am A Disco Dancer 2.0 because the OG one with Mithun Chakravarthy which was iconic needed to be ruined. At this point, I think anything Tiger Shroff and his cronies put their eyes on, gets remixed and badly.

While the world outside burns because of a deadly virus, Tiger and his abs (because after all this time, they deserve to be recognised as a separate entity)are making sure we have something to keep us entertained, or instil fear in us, I am not entirely sure.  What a noble thought, right? Though it wasn’t quite as entertaining as it was cringy and unbearable. Before you go on, watch the video below (don’t hate on me, it’ll be worth it).

PS: Do you not miss the cape!

Also Read: 5 Thoughts I Had While Watching The Trailer Of Baaghi 3. One Of Them Was About Shraddha’s Cameo In A Movie Where She’s The Lead

Also Read: 5 Thoughts I Had While Watching Dus Bahane Karke From Baaghi 3. Mainly, Why Is Shraddha Kapoor Only In Swimsuits In The Snow?

5 Thoughts I Had While Watching Bhankas From Baaghi 3. Mainly Ki Why Do They Have No Originality?