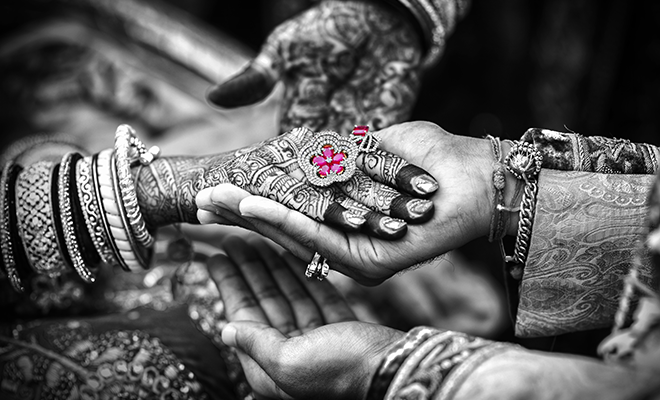 5 Bizarre Indian Wedding Traditions That Are Followed Even Today

Indians are known throughout for their big fat weddings that span over five days, some regions even ten. You have your standard mehndi, sangeet, phera ceremony and reception. But over and above that, many communities in India have some bizarre functions that they need to follow because that is what has been done for centuries. Which is illogical because most don’t even know the origins of these rituals.

Some of them are quirky and fun but some of these rituals are just batshit crazy. Read on to know some of these interesting, crazy rituals and traditions that we follow. You might just learn something new and intriguing!

The change of mind

During Tamil weddings, the groom must pretend to run away to become a ‘sanyasi’ (ascetic, a man with no worldly connections) in Kashi. The father of the bride must convince him to stay and marry his daughter, only once the groom agrees, he is taken to the mandap. This bizarre tradition is called the Kashi Yatra and the groom is given only bare essentials like a walking stick or umbrella for his journey. It sounds crazy but it actually happens in all Tamil weddings.

The bride needs to marry a tree

Don’t look so surprised, this actually happens. It is based on the fact that if the bride is a Manglik i.e. she is born when Mars and Saturn are both in the 7th house, her husband will die a premature death. To avoid this, before the actual ceremony, the bride is married to a banana or peepal tree to break the curse. The tree is then destroyed so that everyone is sure that the curse is really broken. It might sound like a bunch of mumbo-jumbo but trust me this happens more often than you think. I just can’t imagine anyone getting married to a tree.

Welcome the Baraat with tomatoes

Nope, it is nothing like the La Tomatina festival that happens in Spain every year. This happens in certain parts of UP. The groom and his entire wedding party are welcomed (more like attacked) with tomatoes being hurled at them. Isn’t that insane? The logic behind this crazy tradition is that if the marriage starts on such an unfortunate and strange note then it is sure to end in crazy true love. How they can possibly guarantee love, I have no clue. But it happens!

Also Read: 7 Hindu Wedding Traditions With Sexist And Bewildering Origins That We Can Do Away With Now

Hailing from a Gujrati family, I have witnessed this cute and playful ritual myself. When the baraat arrives at the wedding venue and before the groom enters, the bride’s mother attempts to pull his nose while his family and friends try to prevent her from doing so. If she succeeds which she usually does, it is a symbolic reminder for the groom to take care of the bride. Yeah, the man needs to be reminded of that.

Absence Of The Mother

In traditional Bengali weddings, the mother of the bride or the groom is not allowed to attend the wedding ceremony. Yepp, it is because they believe that it is a sign of bad luck if the mother of any of couple-to-be watches the wedding. It is based solely on the logic that she gave birth to them and loves them so much, it makes no sense to me. Can you imagine getting married without your mother by your side? This one needs a serious update, in our opinion.

5 Emotions Every Bride Feels On The Morning Of Her Wedding