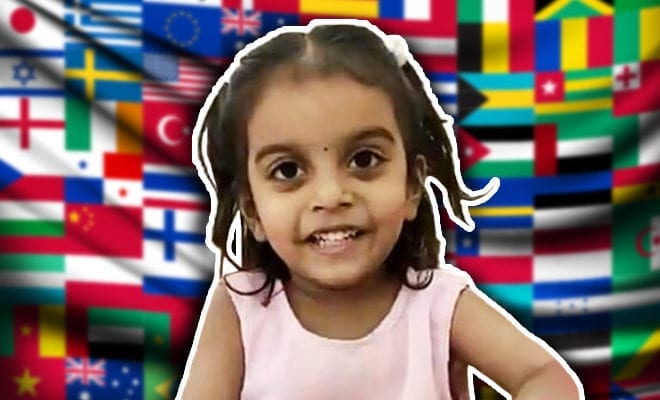 2-Year-Old Girl From Chhattisgarh Can Recite The Capitals Of All The Nations. This Is Impressive

When I was 2 years old, the most that I could do was speak a few words –  just ‘mom’ and ‘dad’- and waddle around the house . And for most people, including my parents, that was more than enough. I was already looked at as a prodigy in the making who was going to be a quick-learner. Little did they know that while what I did at the tender age of 2 wasn’t extraordinary, or maybe they knew but they didn’t want to pressurise me. What is in fact amazing is what this 2 and a half year old girl from Chhattisgarh has managed to do – answer all the capitals of all the nations across the globe.

We’re stunned and feeling rather dumb, probably because I can’t manage the capitals of all the nations even at an age of 25. Meanwhile, this 2 and a half year old girl, Pranina has proved that age is just a number and that a genius brain doesn’t wait to grow older to start showing its prowess.

Captured in an impressive video that was posted on the micro blogging site Twitter by Dr Priyanka Shukla, an IAS officer from Chhattisgarh, the video showcased her colleague Pradeep Tandan’s daughter named Pranina fluently recite the capital names of all the nations from around the world.

Also Read : This 5-Year-Old Girl From Chennai Shot 111 Arrows In 13 Minutes While Being Suspended Upside Down. She Is A Child Prodigy

The video that is more than a minute long showed her being quizzed about the capitals, and her answers came just as promptly as the questions. From knowing the capital of Cyprus to Japan to Indonesia to Armenia, she went on like a pro, leaving all of us speechless!

Our coming generation will bless our whole country ✨✨
And We'll be proud. https://t.co/MFVbcW5RQA

She is blessed with extra ordinary talent 🙌🏻👏🏻 https://t.co/6vbcpTEEs5

That’s amazing. They should continue to guide her without putting too much pressure on her.

Several netizens dropped their views in the comments section, where most people lauded the little girl for her sharp brain while a few expressed concern over whether or not she was forced to learn the capital names. The father of the 2 year old responded to such concerns as he wrote, “These are her extra learnings with her interest in a playful way.”

Meanwhile, we were still busy lifting our jaws up from the floor.