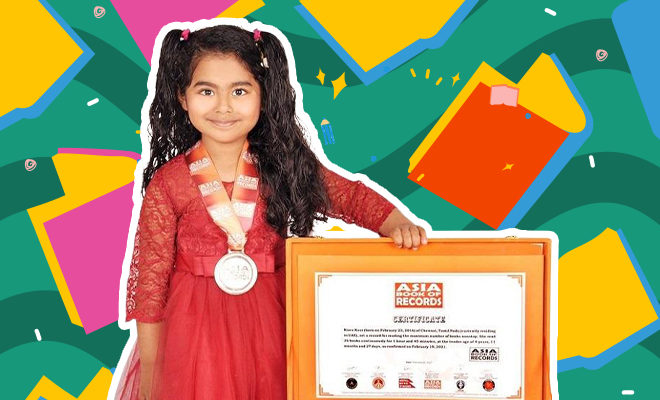 With a reputation to be a total book worm and reading a dictionary in my free time, I have always been considered as one of the biggest bibliophiles. Devouring books for breakfast, lunch and dinner, my love for reading goes long back. But there one girl who would beat me or any other reader out there, to a punch with her recent record where she read all of 36 books in under 2 hours! And the best part? She’s just 5 years old!

Making a stellar record for herself,  5-year-old girl named Kiara Kaur has stunned the world after she finished reading 36 books non stop for a total of 105 minutes. With this, the 5 year old young prodigy entered the  London’s World Book of Record and Asia Book of Record for her impeccable achievement.

The record was set by Kiara on February 13, and the World Book of Records went ahead to refer to Kiara as no less than a “Child prodigy”.

Also Read : Woman Who Held The World Record For The Longest Nails Finally Got Them Cut After 30 Years!

For a 5-year-old Indian-American girl named Kiara Kaur, living in Abu Dhabi, her love for books helped her set a unique world record.

Getting to know more about Kiara, we found out that she became a bibliophile at quite a young age. Yes, younger than this too! The Indian-American girl who lives in Abu Dhabi would start reading just about anywhere, and it was her nursery class teacher who discovered her passion for reading.

Spotting Kiara huddled over a book in a library, her teacher knew it right then that her love for book was real. Talking to NDTV, she said, “Reading from books is extremely enjoyable. You can carry a book anywhere you like. The problem in reading on phones or watching a video is that I can’t read if there is no internet is available.”

She also went ahead to share her choice of books that include having big, colorful pictures. Some of her favorite include Cinderella, Alice in Wonderland, Little Red Riding Hood, and the likes of it. It was also shared how it was Kiara’s grandfather who nurtured this interest in her.  “He used to listen to her stories on Whatsapp calls for hours together. He has a great impact in Kiara’s upbringing,” shared her mother.

The little prodigy dreams of becoming a successful doctor when she grows up, and seeing what she can do at jut the age of 5, there is no arguing that she would have a bright future ahead of her.