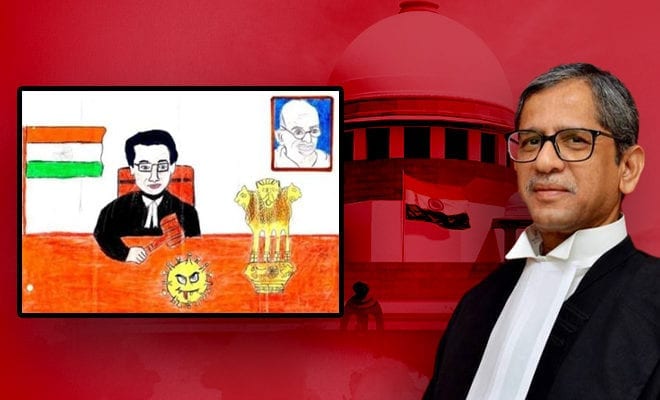 In a world where the spoken word has nearly lost its meaning, for people seldom mean what they say, virtues like honesty, innocence and purity are restricted to either books or kids, the last of the uncorrupted. At least, till now. Which is why when a 10-year-old school girl wrote an open letter to the Chief Justice of India, we knew she wasn’t speaking out of an agenda but the goodness of her heart.

Perhaps one of the most wholesome news we’ve come across all day, this 10-year-old schoolgirl from Kerala has won our as well as the heart of the Chief Justice of India, N.V. Ramana after she wrote to him about how much she lauds him and his service to the country in fighting the coronavirus.

Keeping in mind the several and important interventions made and rulings passed to ensure that the citizens stand protected and away from the lethal grip of covid-19, Lidwina Joseph sought a moment to write to CJI Ramana and appreciate him for all that he had been doing during his tenure.

Kerala student's letter – brimming with pride & happiness – to CJI, NV Ramana Sir, has evoked a similarly heart-warming response from him. Little girl thanked him for the court's orders on 0² & #Covid19 ..
Really they do talk…💞 to 💞 #PictureTalks💫👏🏻🇮🇳 https://t.co/FS29lbRQN5 pic.twitter.com/Za264kzOpW

Also Read : The Supreme Court Said That It’s Time For A Woman To Hold The Post Of Chief Justice Of India

The class 5 student from Kendriya Vidyalaya, Thrissur, wrote about how she had been worried about the rising number of deaths in Delhi and other parts of the country. However, it was when she read the news in the paper about how tthe court had decided to step in and help that she wrote, “I am happy and feel proud your honourable court has moved orders for supply of oxygen and saved many lives. I understood your honourable court has initiated effective steps in bringing down COVID-19 and death rate in our country, especially in Delhi. I thank Your Honour for this. Now I feel very proud and happy.”

The letter that was in the form of a scroll, as colorful as it was heartwarming to see, was a hand-written piece of acknowledgment and appreciation for the CJI that also included an illustration of a judge using his gavel to knock Coronavirus on its head.

Chief Justice Ramana who was elated to receive the letter, replied to Ms. Joseph, as he wrote “I have received your beautiful letter along with a heart-warming illustration of the judge at work”. He further mentioned, “I am sure you will grow up into an alert, informed and responsible citizen who will contribute immensely towards nation-building.”

After all, it is such honest admissions and random acts of kindness, gratitude and appreciation that help in empowering people and give them hope and strength for a better tomorrow.