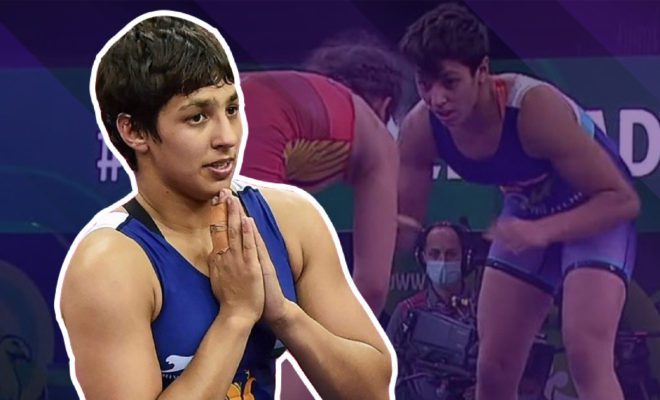 Sometimes, it feels surreal to think that we’re living in the same time as some of these Indian women who are creating history around the world. May it be Avani Lekhara who won at the 2020 Tokyo Paralympics or the Punjab-born Shree Saini who became the first Indian-American to be crowned Miss World America 2021, these women are creating history and inspiring the younger generations. And now another name joins the list! Anshu Malik just became the first-ever Indian woman wrestler to reach the wrestling World Championships final!

The 19-year-old Anshu Malik made history when she became the first Indian woman wrestler to reach the wrestling World Championships final by beating junior European champion Solomiia Vynnyk in the 57kg division. As per reports, Anshu Malik had the semifinal match in her control from the very beginning. She won by technical superiority and ensured her name entered the history books as the first Indian wrestler to enter the World Championship finals.

Also Read: This TV Actor Made Some Regressive And Sexist Comments But Got The Most Fitting Response From Wrestler Babita Phogat

And now, Anshu Malik, second to Sushil Kumar (2010) has become the only other Indian wrestler to become a world champion. After beating Solomiia Vynnyk in the semifinals, Anshu Malik expressed her happiness to reach the finals and said, “It’s extremely satisfying. I am so happy. It feels so good. What I could not do at the Tokyo Games I did here. I fought each and every bout as my last bout… The month after the Tokyo Games was very tough. I could not perform as I had wanted at the Games. I suffered an injury (elbow) and can’t explain how much pain I endured one month before the World championship. I trained hard for this, I wanted to give my 100 percent and will fight in the final like my last bout.”

Seeing her dedication to the sport and for the country is truly inspirational. She has not only made her country proud but has also been an idol for many young girls who are looking to pursue their dreams in sports. This is just the beginning of the wrestling journey for Anshu Malik and I’m sure there is so much more left for her to achieve. And we at Hauterrfly wish her the best of luck for the World Championships final!

Shree Saini Becomes First Indian-American To Be Crowned Miss World America. Her Journey Is So Inspiring!