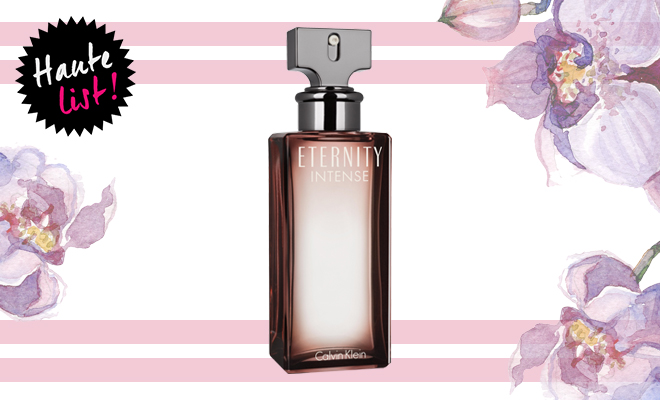 Calvin Klein’s Eternity was launched in 1988. That basically means that the perfume is as old as I am. But it’s still such a favourite, it’s pretty much earned cult status in the fragrance world. But last year in December 2016, CK launched an upgraded version, if you will, and called it Eternity Intense.

I love perfumes, just as much as I love shoes, coffee, and sunglasses, and although I have many of all these things, there’s always that one I gravitate towards. One particular pair of shoes, one pair of sunnies, one type of coffee, and most definitely one particular perfume.

Now, over the years, my tastes have grown, developed, and changed, and I’ve noticed a change in the scents that now catch my fancy. Earlier it was fruity, and by fruity I mean hyper-fruity, whereas now, I like more adult scents, like the richness of flora. This is where Eternity Intense comes in.

The reinvention of the classic fragrance that was meant to stand for eternal love, now uses the rare iris flower. The sensual fragrance showcases the evolution of love into an everlasting and unbreakable bond.

As the name suggests, Eternity Intense intensifies the original floral notes with more flowers and some water notes, Iris being at the top, and warm vanilla at the base.

I’m huge on signature scents and the Original of this one was already a favourite, so I was a bit apprehensive. But I really shouldn’t have been because it’s the original, but better. And considering it was launched in India right now and my birthday is just around the corner, I couldn’t resist picking it up.

It’s long-lasting, has a heady base, and an appropriate amount of floral notes to make it the perfect choice for an everyday scent that has all the potential to turn into a signature. And after all, that’s what you want ultimately anyway, because scents awaken the senses and bring back memories.

And there’s nothing nicer than when a scent instantly invokes a memory because you are so closely associated with it.