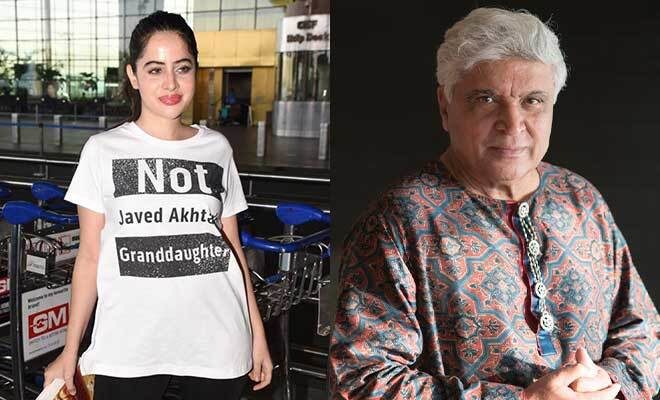 Guys, Urfi Javed is back with another mind-boggling outfit and I swear it isn’t what you think. Keeping her multi-cut closet staples at bay, which look like she walked out of a fashionable slasher flick, the ex Bigg Boss OTT contestant sported a slogan t-shirt, which clarifies a lot of doubts. “Not Javed Akhtar’s Grand Daughter’ is what headlines her white t-shirt (which is probably the first time, we’ve seen her wear one). While Urfi’s fashion sensibilities always come accompanied with a question mark, what also often keeps netizens confused is her relationship with lyricist Javed Akhtar, courtesy of the name ‘Javed’ being common between the two (Umm, I mean that’s normal, right!). And clearing the air about which both Urfi and Javed Akhtar’s wife, actress Shabana Azmi, had confirmed that they are not related to each other. But Urfi being herself, made it loud and clear again.

Urfi Javed is not related to us in any way https://t.co/JjY2GsRVh7

Sporting the white graphic tee with black, slim-fit trousers, and the holy Bhagwad Gita in her hand, she made a point to make a statement while catching a flight as well. While I am not a fan of her eccentric wardrobe and faux-pas driven designs, I won’t deny that the t-shirt looked kinda cool. And with fashion being a medium of communication for the thoughts of the wearer, slogan t-shirts narrate the “look at me” expression. I mean, do you guys remember the infamous ‘Smash The Patriarchy’ t-shirt opted for by Rhea Chakraborty during her NCB office visits? While in no way are we comparing the two incidents, but what surely takes away the spotlight is the t-shirt in common, which can be termed as a mere publicity probe, with Urfi Javed’s history with ‘let’s dress up to stand out’ approach.

And talking about the web parivaar that hurriedly appears to shower its take on all things good or bad, netizens instantly took over the internet to share their two bits on the same. While one said, “Most important thing ki urfi ne hath me Bhagvat Gita le rkhi hai (Most important thing is that she is holding Bhagvat Gita in her hand),” another said, “finally some nice clothes.”

Making it to her supremely bizarre closet, the slogan t-shirt came in like a breath of fresh air amid the tacky lot. With trolls calling out her OTT sense of style, and many addressing her as “sasti Kendall,” courtesy of her outfits that seek heavy inspiration from the super model’s iconic style, Urfi Javed makes it to the headlines by all means. And never fails to surprise us with her unconventional sartorial picks that hardly make it to the fashion bulletin but grace the controversial news segment (whatever it may be, it’s fun to watch her ace ‘em all with her confidence).

Earlier, the 24-year-old was in the news for being related to veteran lyricist-screenwriter Javed Akhtar. This alleged family link-up, welcomed the veteran lyricist into the meme world, followed by an answer from his wife, actress Shabana Azmi who shared on her Twitter handle, “Urfi Javed is not related to us in any way.” Well, related or not, the girl is surely making it big.

You’ve To Admit Rhea Chakraborty’s ‘Let’s Smash The Patriarchy’ T-shirt Was Pretty Cool. Here’s The Story Behind It