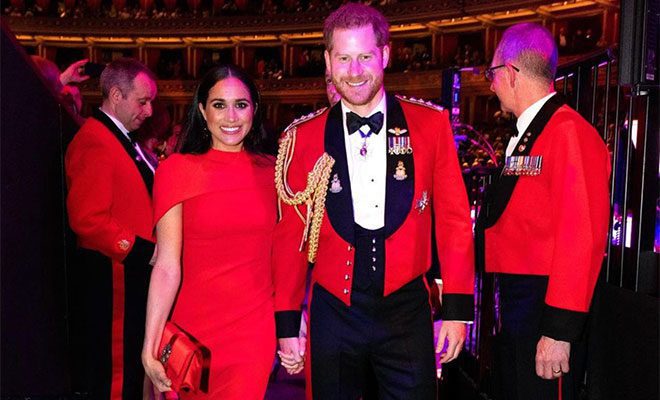 The British Royal Family has been in the news pretty frequently in recent times. It began with Prince Harry and Meghan Markle leaving the royal family and more was added to the mix after their interview with Oprah. The Royal Family has been known to impose a lot of rules and regulations on its members, from their day-to-day functioning to their dressing. When Meghan Markle married into the family, she let go of a lot of her previously very independent life to adhere to their demands. However, she has been compared to Princess Diana for her free and independent spirit who is not afraid of breaking the rules every once in a while. Now that she isn’t a part of the royal family she does have the freedom to dress as she likes and so she did as Meghan Markle returned to the red carpet this Wednesday!

Prince Harry and Meghan Markle returned to the red carpet as they made an appearance at the 2021 Salute to Freedom Gala which was held in New York City. The Gala took place at Intrepid Museum and was attended by Jon Bon Jovi. The event is held to honour military veterans for their services.

For her night out, Meghan wore a stunning fiery red gown by Carolina Herrera. The gown was absolutely gorgeous and had a deep plunging neckline and thin straps which is a huge contrast to the dress code the women of the royal family are expected to follow; the women are expected to hide their cleavage and be modest. Moreover, Meghan’s gown had a fitted waist along with a flowing train and a slit, showing her legs off. This too is a huge change as compared to the royally acceptable wardrobe as their skirts and dresses are expected to be knee-length. Meghan Markle completed the ensemble with a pair of burgundy satin pumps by Giuseppe Zanotti. She also wore very subtle but fresh makeup with her signature smoky eye to compliment her over-the-top gown.

Meghan Markle looked absolutely ravishing and that gown was worthy of being her return to the red carpet. After all the hate she has faced, it is good to see that she is trying to get back to normal and making more public appearances.