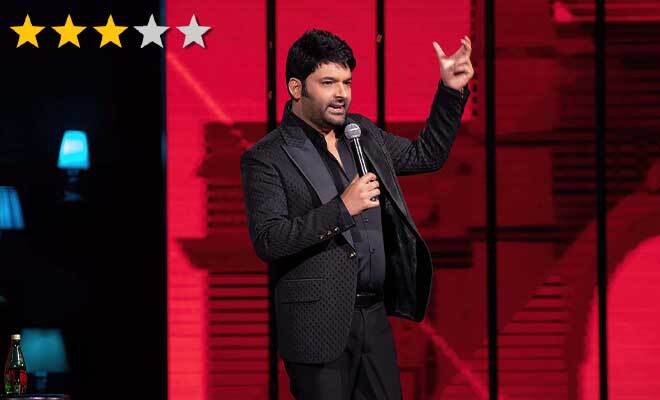 The Kapil Sharma Show is a family affair. And as much as I might criticise the blatant misogyny and body shaming that is rampant on it, the fact is, there’s a certain affinity to his brand of humour that as an Indian, I cannot shake. I could watch a slew of American comedians that blow my mind, I could wax eloquent about how Vir Das gives me goosebumps with every standup special of his. But the one that makes me laugh raucously, perhaps a little louder even because there’s some guilt there, is Kapil Sharma. And I somewhere agree with the title of his Netflix special, I Am Not Done Yet. Because I knew that there’s more to this man with his impeccable comic timing than just silly, fat-shaming jokes. And he kind of proves that with his new and first Netflix special? I am not so sure.

Kapil Sharma: I Am Not Done Yet is vastly different from The Kapil Sharma Show (TKSS). In both good ways and bad ways. For one, there are no celebrities, and yet, Kapil manages to do what he does best, only this time, he is promoting a bunch of Netflix shows like Money Heist and Narcos. There are no cross-dressing fellow comedians to banter with either, but for that, I am glad because while some of those jokes land and are funny because of their timing, they reek of sexism and body shaming often. Not a fan. But it is heartening to see all of his fellow comedians from his show, in their OG avatar—Krushna Abhishek, Kiku Sharda, Bharti Singh, Sumona Chakravarti and more—seated in the audience along with their plus ones, and Kapil’s too, Ginni Chatrath. Also a perpetual presence on his show, Kapil’s mother was in the audience this time too, clearly his lucky charm.

It was all very sweet, very endearing, which I gauged was the emotion that Kapil Sharma was going for in his first standup special for Netflix. This wasn’t driven by gags or any particular current topic. The theme was he himself, his humble beginnings, his not-at-all-humble, alcohol-fuelled tryst with Twitter that nearly destroyed him, and how he rebuilt himself through therapy, and the support of his loved ones, including his deceased father who was always there with him in spirit. There are plenty of jokes on his relationship with his wife and the whole ‘two kids in two years’ jibe. But for a change, the sexist crap he usually spouts was on the down-low.

Also Read: Kapil Sharma Asks Wife Ginni Chatrath What Made Her Chose Him And Her Response Has Left Us In Splits

I’ll be honest, I like this side of Kapil Sharma where he is frank, open, addressing issues like mental health, the struggles of an artist and a comedian, the class divide evident in the reception of his jokes, and the subtle hints of political leanings as he talks about his early days, certain Prime Ministers, Shah Rukh Khan, and Nita Ambani. With the kind of dynamism he has, the sway he holds over the massy standup-comedy audience of our country that would troll the Vir Dases and Kunal Kamras for their opinions, Kapil Sharma is like the Ayushmann Khurrana who could make difficult subjects palatable for his Indian audience that really needs to listen to these topics.

However, where he fails to make that connection is the structure of his comedy set. I don’t think I’ve ever seen Kapil Sharma this nervous on stage. On The Kapil Sharma Show, he is a lion, the king of a jungle he built himself, and every time he opens his mouth, he roars with confidence. Even the humility he shows before celebs like Salman Khan and other veteran A-listers is laced with staunch confidence. But on I’m Not Done Yet, I saw Kapil fumble quite a bit, so much so that I thought he didn’t even give his audience time to process and react to his punch lines. The result was a set that was lukewarm, and the warmth came only from the most emotional bits of his story.

But hai toh yeh comedy, so I kept holding on for some incredible punches that you’d normally expect from him. And mind you, there were some, but not enough to make it a memorable debut. Plus, with no Archana Puran Singh LOLing, you could even sense from the audience’s delayed and measured laughter that they were smiling, but not laughing.

My favourite bits were easily the ones that had Kapil Sharma step out of his comfort zone, like a surprise bit in the end that I won’t ruin for you. The slight discomfort was evident, particularly in this one segment about childhood photos, where his jokes just didn’t seem to land. I sheepishly confess, at one point, I wondered if I was a hypocrite that actually enjoyed the crass humour on the comedian’s TV show and because the Netflix special had none of it, I wasn’t having too much fun.

Also Read: The Fault In Our Comedy Stars: The Kapil Sharma Show Needs To Change Its Sexist, Body-Shaming Brand Of Humour

Kapil Sharma: I Am Not Done Yet wasn’t a revelation or mind-blowingly impressive. However, for me, it did reiterate that India’s favourite comedian could aim higher for his next special, and even on his TV show instead of always going for the low-hanging fruit and relying on his usual crutches. The comedy special was endearing and made me smile, and for hardcore Kapil fans, it will be nice to see something different; although I watched this with my mother who is a fan, and she found it only mildly entertaining. It’s a nice study on whether the popularity of TKSS is because of the other characters and celeb presence, and with just Kapil on stage, minus his usual brand of humour, is not as appealing.

The three stars I accord this special are as much for the effort as they are aspirational. I’d love for Kapil Sharma, in his next special (and I hope there are many because the man indisputably has a gift), is more confident, refined, has his ducks in a row, and maybe even experiments with the format. How about interviewing a celebrity but one that nobody expected? How about a completely musical set? I think Kapil can try anything and his loyal audience will watch. What more can an artist ask for?

Bhaag Beanie Bhaag Review: Not As Marvelous As Mrs Maisel, But She’s Running In The Right Direction