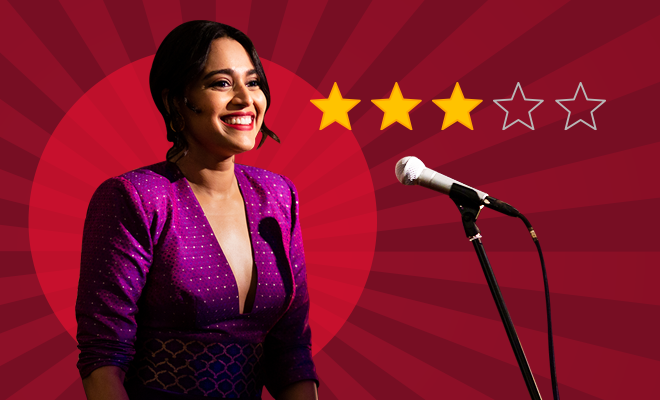 Bhaag Beanie Bhaag Review: Not As Marvelous As Mrs Maisel, But She’s Running In The Right Direction

When I look at shows like Bhaag Beanie Bhaag, which got a mainstream Bollywood actor like Swara Bhasker as a headliner, I get excited for our Indian OTT scene so much. The comparisons with Marvelous Mrs Maisel are inevitable. But the fact that we’re finally moving toward this kind of content that is culturally relevant to the times we live in, has actors moving out of their comfort zone, and doing a decent job of engaging across age groups, is remarkable on its own. Netflix’s newest release is a series about an aspiring female comic, who has to navigate adulting for the first time ever so that she can leave her boring job, ditch marriage to a stereotypical Punjabi guy, and fulfil her lifelong dream of doing standup comedy. Bhaag Beanie Bhaag is created by Ravi Patel and Neel Shah, and also stars Dolly Singh, Varun Thakur, Mona Ambegaonkar, Girish Kulkarni and Ravi Patel. It is directed by Debbie Rao, Ishaan Nair and Abi Varghese.

Bindiya Bhatnagar has never in her life spoken up about what she wants. Like a good girl, she studied hard, did her MBA and got a basic job that pays the bills. But what about her dil? It wanted to do standup comedy ever since Bindiya saw Shekhar Suman (on Movers and Shakers, I am assuming; excellent inspiration, if I may say so!) on TV when she was young. In fact, she has been using the standup scene to occasionally try it out, without ever committing to it fully because she isn’t a ‘comic’ comic.

But when her rich, Punjabi boyfriend of three years proposes to her, and she says her entire 4BHK life planned and laid out before her, with two annoying kids et al., Beanie lives up to the show’s title. She runs, and runs right into Ravi, an NRI comic who’s been working the comedy circuit in India. He, with help from Beanie’s BFF, Kapi, help Beanie do her thing. Meanwhile, her parents are struggling to come to terms with their daughter throwing away her happily ever after for a not-so-stable future.

The show is six episodes of roughly 30 minutes each, and over the course of those episodes, Beanie learns to walk before she can run. Not just when it comes to her comedy, which starts off as being too basic but eventually comes into its own. But also the various struggles that come with adulting and being a female comedian in a country that gets scandalised with when its women use words like ‘sambhog’.

Not quite Marvelous Mrs Maisel, but enough

Look, I am too big a fan of Marvelous Mrs Maisel to not draw comparisons. But rest assured, it was all in hindsight, so it didn’t exactly ruin my experience of watching Bhaag Beanie Bhaag. But the parallels, wherever they are present, are hard to ignore.

For starters, in Maisel, Midge is someone who has her entire life well-planned and perfect. For Beanie too, her life is according to a plan, except, it’s not hers, Midge’s husband Joel’s the one who dabbles in comedy and his family is the annoying one. In Beanie, you’ve got Varun Thakur who is actually a comedian IRL playing her fiancé. Both these characters are actually nice guys, but you can see why they aren’t perfect for their comic better halves. And his on-screen parents are quite overwhelming. As for Ravi Patel’s character Ravi, could he be our Lenny Bruce?

Several plot points will be difficult to not compare. Both Midge Maisel and Beanie Bhatnagar perform their first gigs in very similar, distressed outfits.

But then, as they both get bolder, you’ll see them dawn this deep pink, that is both a feminine colour but also one that sends the message, “Fuck you, we’re women, and we’re funny, and we own it.”

The whole parents being scandalised by her NSFW jokes on stage. Or the mother being a tad more supportive than the father. Even towards the end, the way her romantic relationship dynamics change are quite reminiscent of the character arcs in Maisel. Both Midge and Beanie have a knack for giving their best performances when they’re channelling extreme emotions, like anger, and want to sass someone back.

The difference between Marvelous Mrs’s Maisel and Bhaag Beanie Bhaag

That being said, while Marvelous Mrs Maisel runs with its comedy from the get go, Bhaag Beanie Bhaag takes its own sweet time to set the pace. Beanie’s earlier sets didn’t seem funny to me. And as I have repeatedly said this, even when I was talking about Comedy Couple on Zee5, if you’re movie / show about standup comedy, you’ve got to have jokes that hit the sweet spot, ya know? Unless you’re showing a comic’s journey from being below average to a real show stealer. Even realistically, there’s so much competition on the Indian comedy scene today that basic jokes like the ones Beanie cracks in her first ever performance seem inadequate to earn her, say, a coveted slot in an exclusive comedy showcase.

Another thing I felt was that while in Marvelous Mrs Maisel, the humour was crisp and witty, Bhaag Beanie Bhaag sometimes tried a little too hard. Especially in the earlier episodes, the regular humour (not the standup) felt a bit overdone to me. But it definitely got better nearing the end of the season, and that’s why I am a tad excited for a Season 2, because we’ll finally see how both Beanie and Swara Bhasker are getting comfortable in their zones.

Beanie isn’t quite there yet, but she’s running in the right direction

First things first, Bhaag Beanie Bhaag is very easy to get invested in. All the characters are instantly endearing and their struggles are kaafi relatable. I love watching Varun Thakur (Vicky Malhotra) and Dolly Singh (Raju Ki Mummy) in their melodramatic personas on social media! And in Beanie, they’re actually toned down, normal people, and do it so well. Varun starts off as this caricaturish Punjabi guy, but like Beanie, you don’t really hate him or think he’s boring. He feels like that guy who is perfect but you just wish he had that ONE thing more, which is a dealbreaker for you. And then you realise, maybe all you had to do is ask?

Dolly’s Kapi is an influencer, but she doesn’t feel too plastic, thank God, or hasn’t been made to overdo it. They’re such a stereotype on screen, but Kapi isn’t. Both Mona Ambegaonkar and Girish Kulkarni are so sweet and funny as Beanie’s parents. I loved the therapy scene that they have between them. Ravi Patel’s Ravi gets on his clueless NRI nice guy vibe on and sells it.

Comedy is supposed to be the toughest gigs out there. I mean, everybody can get sad and emotional right. There’s no such thing as emotional timing. But comedy and comic timing, now that’s something not all actors can. A whole lot of it depends on the writing, obviously, because if the joke isn’t funny, delivery can only get it so far. I thought Swara Bhasker does a fairly good job of making Beanie relatable to any of us who aspire to ditch our 9 to 5 lives and pursue our passion.

But here’s my biggest peeve, okay. Beanie isn’t funny when she’s not on stage. Comedians, even when they’re talking normally to you, chatting with you, sassing you, are effortlessly funny. Whether through sarcasm, or wit, their humour is always popping up. At one point, even her own mother wonders if Beanie is really funny enough! Because it didn’t come through. Maybe that’s why it seemed surprising to me when she managed to nail an impromptu show out of the blue. Because until some time back, she was struggling to write good jokes in a notebook! I’d blame it on the writing, and I think the writers should really up their game when it comes to making at least Beanie, if not anyone else, funnier.

The show definitely is in its nascent stage. And even if it were to take inspiration from real life, there’s a lot of themes, from trolls to censorship to societal outcasting, that the show can tackle in future seasons. And that sheer scope of possibility is what gets me excited for Bhaag Beanie Bhaag!

Verdict: Bingeable Beanie Bhatnagar? For sure!

Within literally a day or two of meeting Beanie, Ravi asks her out and tells her he likes her. And it made me think, wow this guy doesn’t waste time! Since he is a co-creator of the show, it explains why the show doesn’t waste time either. It’s light, fun and an enjoyable binge. And something that I think we should all watch.

I’ve often heard men complain that women aren’t funny or only talk about women’s things or male bashing. Well, with Bhaag Beanie Bhaag, you do get a glimpse at the BTS of a female comedian’s life. And it makes you realise that its not easy, and once again, it is their carefree male privilege that perhaps gives male comedians a slight edge in terms of freedom or expression and experience.

But coming back to my original point, I’m so glad we’ve got shows like Bhaag Beanie Bhaag that are taking the right kind of inspiration from American television and trying to create something relatable for the Indian audience. Run, Beanie, and then fly!

That’s been my time, guys! See ya at the next one?