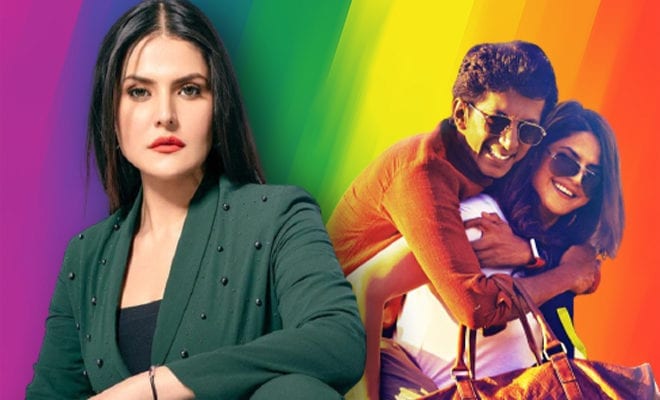 The Indian entertainment industry has opened up to telling LGBTQ+ stories and doing justice to their queer characters. Perhaps, not as much as we’d have liked it to, and still lacking in the more subtler nuances. But it is a beginning that was a long time coming and we’re glad that it is here. Recently, we got another serving of queer cinema with Hum Bhi Akele Tum Bhi Akele, directed by Harish Vyas and starring Anshuman Jha and Zareen Khan amongst others. The story is easily like a Jab We Met, replete with its Himachal roadtrip, but if it were made with queer characters. And Zareen Khan has now talked about how she prepped to play the character.

In a recent interview, the actress talked about how filmmakers have always been skeptical about casting her for non-glamorous roles, and this time was no exception. She auditioned for her role only because she was confident that she would be able to pull it off.

Also Read: Zareen Khan Says She Was Typecast As ‘Just Another Pretty Face’ Before She Could Prove Herself As An Actor

Further, speaking about her character, Zareen said “It wasn’t really difficult I would say. As for the body language, I have been a tomboy all my life, so that trait, which I was always told to correct, helped me here in the film.”

Zareen Khan also talked about ensuring that her first-time portrayal of a queer character was sensitive and authentic. And she chose to channel it all through a singular emotion—love. “The thought occurred to me—because I am not a homosexual—that I shouldn’t end up doing something unknowingly, saying or portraying something that might offend the LGBTQ community. Then I thought to myself that it is about portraying the emotion of love and that emotion is felt the same way how a straight person would feel it, because the emotions are the same.”

“I just had to be honest to the emotion of love and just portray it on screen with all honesty,” she told the media.

Now that is beautiful and we’re glad that actors are putting so much thought into getting the nuances of their characters right, and making sure that it isn’t just representation for the sake of representation but that it is real and relatable!