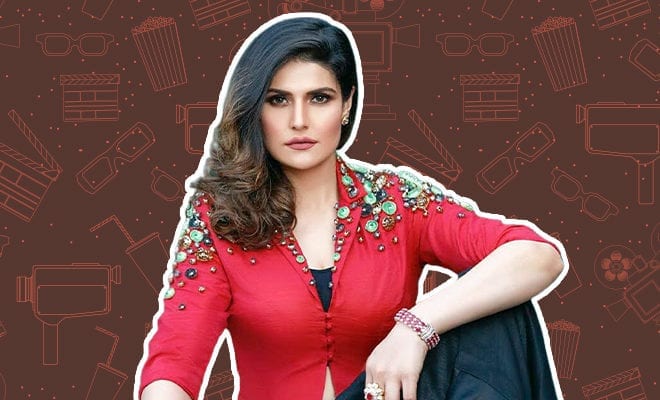 After all the nepotism talk that happened last year, and the year before that, in fact ever since KJo was accused of the crime on his own talk show, one thing’s pretty clear that making it big in Bollywood isn’t an easy feat, especially if you don’t belong to the film fraternity. For ‘outsiders’ as they are called, the doors to new opportunities are much less than those for the star kids. Things get even harder when you are judged or typecast for your looks even before you can prove yourself worthy in the entertainment industry.

Zareen Khan has opened up to facing this first hand. When she debuted alongside Salman Khan in the movie Veer, she was mercilessly compared to his ex at the time, actor Katrina Kaif because she looked like her. She was instantly tagged as Katrina’s lookalike and that tag stayed with her. Plus, in the industry she was considered just another pretty face who couldn’t act before she ever got the chance to show her talent.

Zareen Khan recently talked to an online portal about how she never got the opportunity to show her talent because she was typecast as just a pretty face. She said, “I want people to see my potential. Till lately, I was only identified as another pretty face who cannot act, without even giving me an opportunity to showcase my talent. But now, I am doing my bit, reaching out to whomever I can and I feel lucky that there are people out there who still believe in me and want to give me a chance to show my talent. I am happy to work with such people.”

Also Read: Zareen Khan Says She Was Typecast As A Katrina Kaif Lookalike And Called ‘Fatrina’ Because Of Her Weight

She believes that a lot of it had to do with the fact that she was not from the film background. She said that because she was an outsider, she didn’t have the privilege of numerous opportunities and offers and had to hustle to make a mark in the cinema. “I am not from a film background that a huge line of producers and directors will be outside my house to work with me irrespective of the fact that whether my last film was a hit or a flop. Being a person not belonging to this industry, I have to be very careful with everything that I deliver. It has to be good and I have to take time to gauge a project and not just do for the heck of it, otherwise, after a point, even those projects will stop being offered to me. I am just being very careful in what I present to my audiences,” she said.

No one comes to Bollywood to be compared to other actors but make their own name, which unfortunately didn’t happen for Zareen because she was tagged as a lookalike ever since the release of her debut film. She said, “People come into the industry to create an identity for themselves and not to be someone else’s lookalike or shadow. I have struggled to make a place for myself in Bollywood for 11 years, but till date, people tag me as Katrina’s lookalike. No filmmaker wants to work with a lookalike or duplicate.”

And not just Katrina, she was compared to other many actresses that people found her to be identical with. “I think I have a universal face. I apparently look like a lot of people. Some call me Pooja Bhatt’s resemblance, some say, Preity Zinta, some even state I am Sunny Leone’s lookalike. I don’t understand why don’t I ever look like Zareen Khan to people,” she said.

Also Read: Zareen Khan Spoke About How She Had To Start Working After Her Father Left Them. We Have So Much Respect For Her Struggle