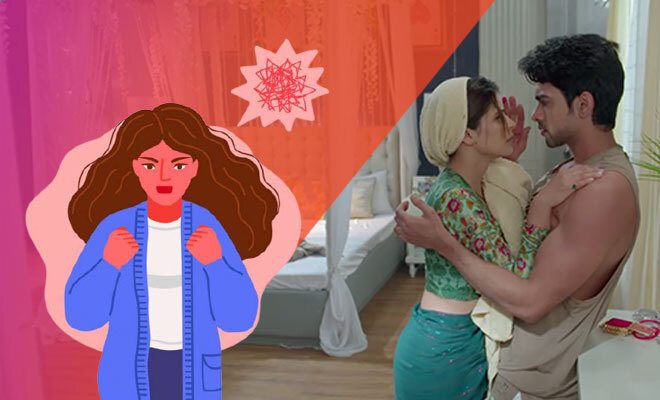 My latest rant topic is… Indian TV soaps. Yep, I may hardly ever watch it but that doesn’t mean I’m not updated (thanks to social media) about the nonsensical and ridiculous things that go on in them. They say that when you want to watch Bollywood movies (most of them), you need to keep logic aside and watch it. But I say, when you want to watch Indian TV soaps, you need to keep your brain, eyes, ears, everything aside and watch it. I mean, do I have to even justify the previous statement? If yes, then I have three words for you: Sasural Simar Ka. Yes, I went there. That show was the cringiest and most ridiculous show I’ve ever seen. And it is not just that show, many of the TV soaps show the most random and unrelated things to either make it romantic or to create conflict. Have you seen that clip going viral from Thapki Pyar Ki of Colors TV?

If any person from a TV soap (or related to any TV soap) is reading this, let me tell you your love triangles are getting boring, and getting the leads to marry multiple times in one show is not helpful either.

But let me give you a very recent example of the most dumbest and ridiculous thing that Indian television has churned out. In a recent video that went viral on social media, a man is seen slipping and accidentally applying sindoor on his wife’s forehead. *facepalms*

The scene is from a television show called Thapki Pyar Ki on Colors TV. Forget about logic, the writers of this TV soap have beaten physics to create this so-called ‘romantic’ scene. I’ll take the liberty to describe the scene to you, cause why should I be the only one feeling the cringe?

In the video, the wife is standing near the dresser getting ready when her husband slips on the wet floor. He then somehow manages to balance himself and in the process of doing that his one single, ring finger is covered in sindoor and then accidentally happens to apply it on his wife’s forehead. Don’t even ask me how that happened.

In the list of many ridiculous things that Indian TV soaps have given to us – that includes, immortal grandmothers, big-bindi women as vamps, never-ending episodes, bizarre storylines, and cringy narratives – this is now the one that tops the list for me. I mean, I trust only an Indian TV soap to come up with such a random, nonsensical ‘romantic’ scene.

But here’s an appeal, can they please stop? I understand that Indian television caters to a certain section of audience that enjoys this kinda stuff. But I’m sure even they realise how ridiculous this is. Besides, just as OTT has managed to evolve its audience gradually, even Indian television can try to do so by evolving itself and not pandering to such nonsensical notions of love, family values, and drama.

Having said all this, trust me you should watch the video if you want to have a great laugh. Nothing better than laughter to make your day, isn’t it?

If You Love Strong Women, You Should Watch These Shows On ZEE5.