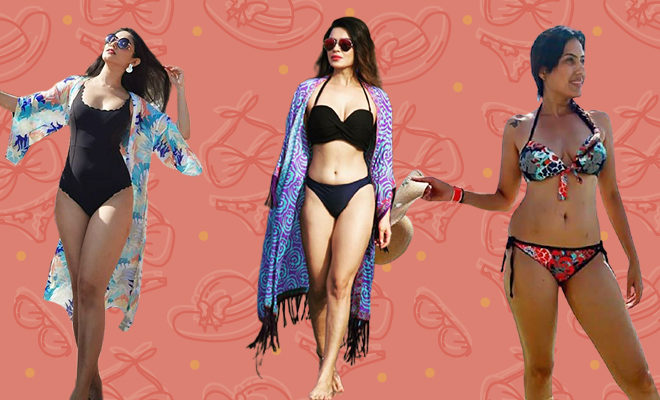 TV shows, particularly daily soaps, are a huge part of the Indian entertainment landscape and perhaps people get a little too attached to the characters in these serials. We still hear the stories of how Mihir drying in Kyunki Saas Bhi Kabhi Bahu Thi disappointed the fans to an extent that the producers had to bring the character back to life. And let’s not talk about the TRPs that reached the skies when he did come back. The emotional desi audience resonate with the characters and it seems like they make them a part of their lives. Take the onscreen bahus for example. People get seriously offended when their favourite bahus post a picture in a bikini as if they are their own DILs baring the skin. TV celebs, especially women are often slammed for not carrying the sankari image in real life too, which is so unfair.

What we as an audience fail to understand is that these actresses have life out of the character they play on TV and they don’t need to live up to our expectations when it comes to clothing. Why are we expecting them to wear Indian clothes offscreen? What’s wrong with wearing a bikini? On Bigg Boss, Devoleena Bhattacharjee was given the tag of ‘bahu bani babe’ because it was surprising to see her in glamorous outfits after seeing her in saree for years on TV. The same rule doesn’t seem to  apply to film actresses, although they are also slut-shamed and criticised for wearing a two-piece. However, TV actresses who play the role uber sanskari bahu and beti for years find it difficult to break out of that image and be themselves on social media without offending a lot of their followers.

That being said, these celebrities are not letting the trolls and unreasonable expectations stop them from posing in a bikini nonetheless. In fact, they often give it back to the trolls by posting a powerful and inspiring caption with their bikini pictures and encourage other women too to wear whatever they want without giving a hoot about what people think of them. They are flaunting their bodies and getting real about flaws as well but more importantly, they empower women by not succumbing to the societal pressure and wearing a bikini like a boss. A boss ‘babe’ actually. Here are 5 TV actresses who not only posted a picture in a bikini but shut trolls with a strong message too.

Aashka Goradia recently posted a picture in a black bikini and wrote, “For all those women worried about “log kya kahenge”, DO NOT waste your time thinking what others make of you, what you make of you is the best version there ever could be, function from the place where what you think and feel is more important, there is no bigger sense of freedom than allowing your state of mind to be free of ‘log kya kahenge’ Be humble, be kind and hold space for people but not their judgements. RISE ABOVE. One life and live it the way you desire. Celebrate yourself”

Sumona Chakravarti who became a household name after playing supporting roles in TV shows and then playing Kapil Sharma’s wife on his comedy show posted a picture in the pool on Women’s Day. She captioned it, “Now u will say why am i wearing a swimsuit? Why am i not covered? Listen up – What we wear or don’t wear, What we do or don’t, Whether we drink or smoke, Wear pants, bikini or a saree, Whether we’re working women or not, Whether we choose to have children or not, Whether we choose to marry or not, IS NONE OF YOUR GODDAMN BUSINESS. Go enrich your life n the ones around you. Stop with those judgemental, stereotypical, chauvinistic behaviour 🛑 ✋🏽 That’l be enough for us.”

Kamya Panjabi also chose a picture of herself in the bikini on International Women’s Day this year and captioned it, “Breathe, feel the air, the world is yours! You are strong you are beautiful you are you. Go scream out loud n let them know this is ur life n u will live on ur own terms…. There is no limit of what a women can achieve…. go for it.. Happy Women’s Day to all the lovely Women in this world”

Kritika Kamra was heavily trolled and even body-shamed after she posted a picture in a bikini but she decided to turn a deaf ear instead. She said in an interview, “Its my Instagram page and I can put up whatever I want. I wanted to put up a photo in a bikini, so I did. I wasnt affected by the comments, as I had turned off my notifications, which is a good feature. You are never bothered then. Bascially, people just need a reason to talk. I wont lie nasty comments do affect you, especially once you have read them. Any girl in a bikini attracts certain comments about her body, shape, etc.”

TV actor Donal Bisht got trolled for wearing bikini on several occasions. She clapped back with an instagram story that said, “Clothes can’t explain a woman’s character! Never judge a woman by her clothes! Judge her by her heart.” Later, she said in an interview with Hindustan Times, “Women should be allowed to wear what they want, and whatever they feel comfortable in, without being judged… And I’m not the first person on the planet who wore a bikini! Why make a big deal about it?”

Catch Hauterfly’s interview with her here:

Also Read: Donal Bisht Claps Back At Trolls For Shaming Her For Bikini Pictures. Her Choice Of Clothes Is No One’s Business!