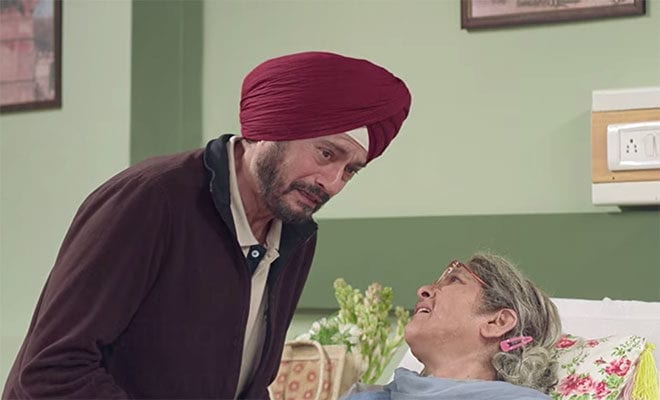 Twitter User Points Out How Neena Gupta Playing Kanwaljeet Singh’s Mom In ‘Sardar Ka Grandson’ Is Ageist. It Is!

Just last week, Radhe: Your Most Wanted Bhai released, where Salman Khan, who at 55 is older than my mother, was paired opposite Disha Patani, who at 28 is younger than me. Now I am learning not to be an ageist and judgemental about people’s romantic relationships. But when I don’t see a gender reversal happening on screen where an older woman is allowed to romance a guy half her age, it’s a little difficult for me to stay on course. And just as I was getting over my rage for this one, a Twitter user pointed out how in Sardar Ka Grandson, the Arjun Kapoor starrer that released on Netflix on Tuesday, has Neena Gupta playing Kanwaljeet Singh’s mother.

Now maybe the younger lot are all confused over this. What’s the big deal, right? But us 90s kids and our parents and grandparents will recall that Kanwaljeet Singh played Neena Gupta’s husband in the TV show Saans.

love that Bollywood has found the magic potion for men not aging… congrats to them.
(but also ew I will never stand for Neena Gupta ageism so f this movie)

Twitter user Priyam Saha pointed this out on Twitter, and in the replies, another user talked about how the Indian entertainment industry does major partiality when it comes to ageism—it only applies to women. Men can be whatever age and still play college students. But God forbid if an older woman wants to pull something like that. I mean, we see Rajinikanth with all his prosthetics and makeup looking like a 30-year-old all the time, even younger. Why don’t we have actresses doing it? Also, isn’t it a little weird that both these actors are in the same age bracket?

Also Read: Neena Gupta Says She Has Battled Loneliness All Her Life

Now, I watched Sardar Ka Grandson. And Neena Gupta, even with that makeup, doesn’t really look her character’s age in the film. But because of her performance, she convinces you that she is really in her 90s, and that a tantrum-throwing stubborn granny is supposed to be cute. But I think I felt some of that ageism peek through when, during the climax, her character finally gets to see her old Pre-Partition house from Lahore.

The scene is that Aditi Rao Hydari plays the younger version of Neena Gupta’s character, and the husband, who dies young, is played by John Abraham. So when this climax comes around, and Sardar (Neena’s character) goes into nostalgia mode, she sees her husband as the same, young and handsome man. However, instead of showing him welcome a 90-year-old Sardar, the scene reverts to a John talking to the younger version of his wife. Why so? Why can’t we have her as she is, in all her aged glory, having kept her promise and survived all these years, and made him proud?

How would the audience react to a young actor saying romantic lines to an older woman? Maybe that’s a question we ought to ask.

5 Reasons ‘Mare Of Easttown’, Starring Kate Winslet As A Detective Investigating A Murder, Ought To Be Your Next Watch