Tribeca ‘Mark, Mary & Some Other People’ Review: A Non-Judgemental Exploration Of Non-Monogamy That Has Fun On The Way 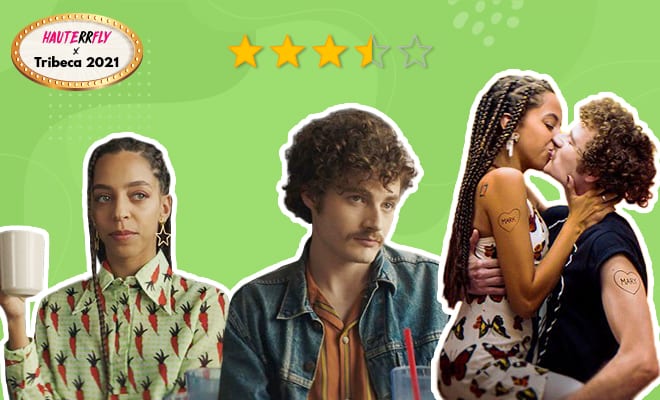 In some of my recent philosophical readings on marriage (being single at 30 makes you seek assurances in the most unlikely of places), I came across the views of George Bernard Shaw. They’re quite interesting, if you were want to check them out. While watching Mark, Mary & Some Other People, a film that explores non-monogamy (or open relationships or polyamory) which premiered at the Tribeca Film Festival this month, I was reminded of this particular quote: “Confusing monogamy with morality has done more to destroy the conscience of the human race than any other error.” On reel or in real life, polyamory or promiscuity is often judged harshly and associated with loose morality in the person, particularly women. What I loved the most about this film, then, is how completely devoid of judgement it was in its treatment of the subject, with an ending that was bittersweet, much like life and relationships are. The film stars Ben Rosenfield and Hayley Law, as the titular Mark and Mary, with some other people, including Odessa A’Zion, Nik Dodani, Matt Shively, and Sofia Bryant.

Director Hannah Marks is also the screenwriter, and one of the producers. The cinematography is by Casey Stolberg, editing by Andy Holton, and the music is composed by Patrick Stump.

What’s happening with Mark, Mary & Some Other People?

I levy huge importance on the meet-cute in rom-coms. And this film has a delightful one where the titular couple meets while Mary is trying to buy a home pregnancy test. They’re old acquaintances. Mark (a charming Ben Rosenfield) ends up taking Mary (a delightful Hayley Law) for some juice, and not only helps her take the test but also sings for her in the bathroom stall (on demand) while she waits for results. It’s fresh, funny and unexpected. Not to mention, educational, since their talk about simplifying pregnancy tests (Mark and his father are in the plastics business) is on point. Who really wants to figure out what one line and two lines mean when they are so stressed? Why can’t it just say pregnant or not pregnant?

This one meet-cute tells you quite a bit about the characters and what the movie is going to be like. Both Mark and Mary have instant chemistry. Mary looks like someone way out of his league and yet Mark has this sweet charm that is undeniable. Mary works one of those ‘sexy maid’ cleaning jobs but she is clearly passionate about music. She is an outspoken feminist and part of a girl band that is trying out crazy names likes ‘Biological Clock’ (I love this running joke!).

We don’t get much of their courtship, but find out that a year later, they have one of those instant weddings with nobody else but the couple present. Mary gets to be the bride that kisses the groom instead of the other way around. And the fact that they both continue with their lives and the way they look (Mark’s moustache is…), and the jobs they do, suggests that they’re both in one of those rare marriages that are genuinely happy and not in want of anything. 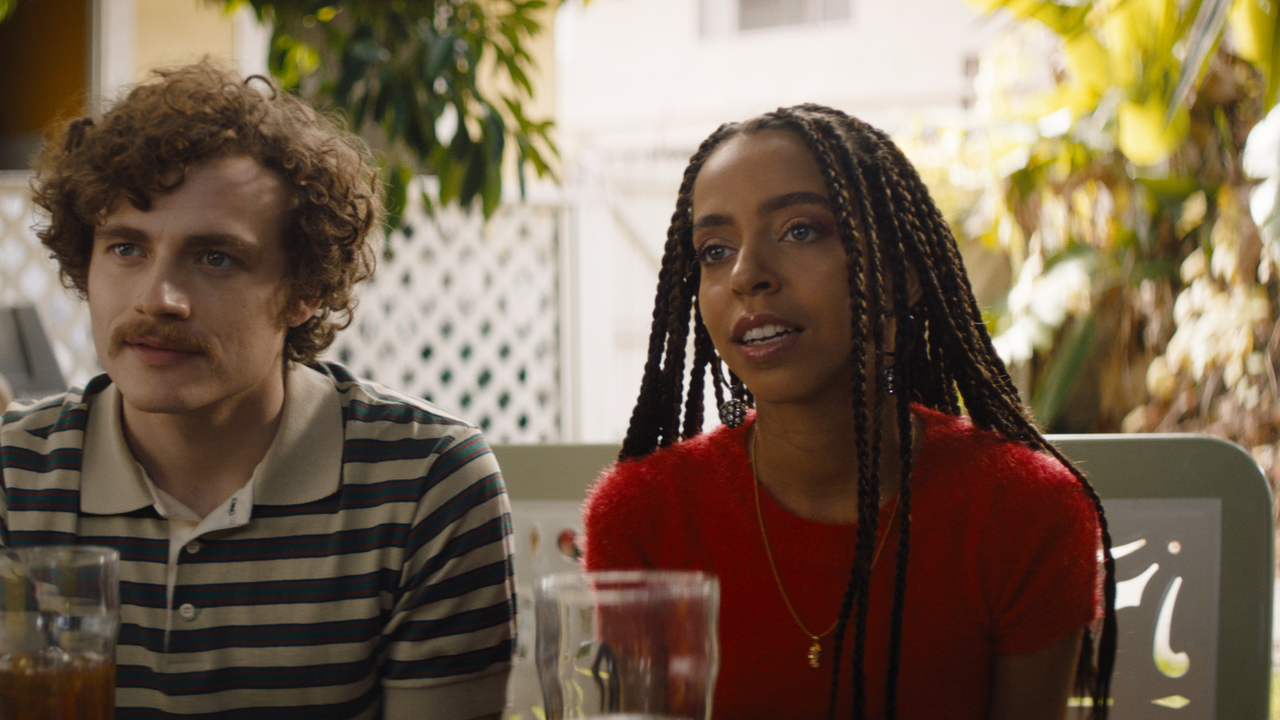 That’s one of the first major differences between Mark, Mary & Some Other People and some other films I might’ve seen exploring this subject. Mark and Mary have a banging sex life and really love each other. They aren’t drawn towards non-monogamy because one of them is philandering or unhappy, or their marriage has been around for long and they’re bored. A friend simply tells Mary that marriage does not equate monogamy for life, or monogamy for “your pussy’s life” and technically, that does make sense.

After initial hesitance and measured rage, Mark does agree to try it out, because they both agree that they’re secure in their marriage and only to prove to Mary that it’s not going to work. And after their first attempt at scouring a party to find other people to sleep with, they both realise that this is not as easy as it looks, and they don’t really want to do it. At least, not without some rules.

With a few basic rules established—like no going down on other people, no sleeping with the same people twice, and no exes—Mark and Mary download a hookup app and are open for business. There is a cardinal understanding that if one of them wants to stop, they will stop. And thus begins a roller-coaster that’s fun, until it isn’t.

The film showcases an open relationship quite realistically and has fun with it, without making it sleazy

I haven’t been privy to how an IRL open relationship works, but I’d imagine if two people who are secure about their place in other person’s life were to go for one, this is totally how they’d do it. It’s one thing to have your friends help you get laid in this unique situation, but I liked that writer-director Hannah Marks chose to let Mark and Mary really be partners in this endeavour too. And just like their meet-cute, where they tackled an otherwise awkward moment (waiting for the pregnancy test result) fun and hilarious, they pulled something similar when they helped put out the best versions of each other out in the world of online dating. Who knows your sexiest profile and your best move than your SO?

The rules in their relationship seemed workable too, and I liked that while Mark was the one adhering to those rules, Mary was all about breaking the ones she was okay with. I’m also glad that we see Mary exploring her sexuality and not restricting herself to one gender. It’s a good change to see women have some real fun, even more than the guy. When story eventually led the couple to a threesome, that progression felt organic, and not just a plot point inserted to titillate. And no matter what happened, the passion between Mark and Mary did not wane.

What sold me the most on the film was that nobody was making a very huge deal about it or turning the conversation into a sleazefest. Not even Mark’s friends, who by the virtue of being men, you’d expect to do just that and declare their friend the epitome of masculinity.

Mark, Mary & Some Other People left judgement at the door, and hopes the audience does too

When you’re creating a work of art that could be polarising, your own bias can every easily seep into it. However, director and screenwriter Hannah Marks manages to make this a very non-judgemental look at non-monogamy. The film isn’t a commentary on the subject, or isn’t out here trying to tell you that polyamory works because “It looks so fun when Mark and Mary try it,” or bad because “Look what happened when Mark and Mary tried it.” It’s merely an observation of Mark and Mary’s story. Maybe it works for them, maybe it doesn’t. I’m sure there are couples who mutually make it work, while others who get destroyed in the process.

When you see where Mark and Mary are in their lives at the end of the film, there is again no judgement in telling that bit of the story. And Marks ends it in a beautiful way, absolves our protagonists from any guilt or blame. Because really, there ought to be none. As Mary had pointed out, they got married because it was an adult thing to do, and even trying out polyamory was just one of those decisions they made.

An open ending, then, seems like the most in sync with the overall unbiased and relaxed tone of the film. And I love the possibility of what all could happen.

Mark, Mary & Some Other People is a refreshing and fun take on non-monogamous marriages, and what makes it all that is the absolute lack of judgment in its treatment. Ben Rosenfield and Hayley Law are competent performers and manage to evoke such good chemistry, that it made me really root for the couple and their marriage. A huge shoutout to the rest of the cast, to the costume design team for all of Mary’s outfits, and to the hair and makeup team for making Ben’s moustache actually look appealing at some point! It just grew on me. A special mention for whoever was responsible for the setting up Mark and Mary’s home. Their bedroom, with that dolphins against the sunset wall… love it!

Watch Mark, Mary & Some Other People to have some fun exploring the idea of open relationships, and maybe some education on how to go about it, as long as you’ve got an open mind!

This review is part of our Hauterrfly x Tribeca Film Festival coverage.

Kevin Can F**K Himself Review: Annie Murphy Kills As A Disillusioned Sitcom Wife Subverting TV Gender Roles. Love That Journey For Her!