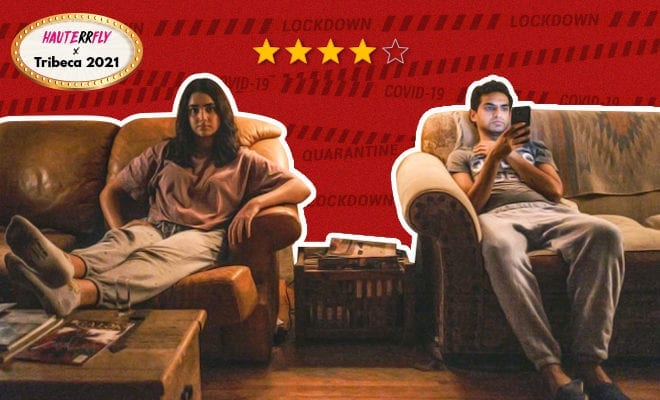 When I planned to attend the Tribeca Film Festival this year (virtually, of course. I miss you, New York. Sigh!), I didn’t imagine I’d be watching films on arranged marriages, Manisha Koirala playing Fabulous Lives Of Rich Indian American Wives with their Prada and pretentious parties, and a beautiful ode to the love of cinema set in Kathiawad, Gujarat. All of them set to very familiar Bollywood music, might I add. But here we are, almost a week into Tribeca 2021, and I’ve seen them all! I recall when I was sitting and meticulously making an excel sheet of films I was eager to watch and review, 7 Days was right on top. The film, directed by Roshan Sethi, stars Geraldine Viswanathan (Broken Hearts Gallery, Bad Education) and Karan Soni (Deadpool, Pokémon Detective Pikachu), who also co-wrote the film with Sethi. And it is about how two Indian Americans setup on an arranged marriage date by their parents end up spending more time together than anticipated thanks to the COVID lockdown!

I mean, you tell me, what’s not to like about that? I’ve personally heard so many stories of new couples having either grown solid during the lockdown or broken up because staying together so soon didn’t work out for them. As someone who is, for the lack of a better phrase, “in the market” for arranged marriage too, I can totally imagine how crazy this whole thing could turn! Just like our resumés, we all pad our dating and Shaadi bios. But to have someone find out the truth about who we are and what living with us could be like in the first meeting itself? AWKWARD! For the couple, I mean. It’s pure entertainment for us, looking in from the outside. Grab the popcorn, y’all!

But there was also the memory of just how much I loved watching Geraldine Viswanathan in Broken Hearts Gallery, and Karan Soni as Dopinder in Deadpool. I haven’t watched much of the stuff they’ve done together, but I had a feeling that their chemistry and timing would be pretty good. And well, I wasn’t disappointed!

Ravi and Rita’s parents set them up for a first date in the arranged marriage process. They probably think they’re a decent match. After all, Ravi is vegetarian, full of traditional values, loves his mom the most, and does not drink or smoke. And Rita is also the same, right? Right? Erm….

After their flustered and rather awkward first date (with masks and lots of sweating) ends with scary COVID outbreak news and a shelter-at-place (lockdown) order imposed, these two newly-mets end up at Rita’s home. And if Rita wasn’t much forthcoming about herself on the date, her house totally does not mind opening up about Rita’s life to a stranger like Ravi. He soon finds out that not only does Rita eat meat ravenously, but she also drinks, is not a good virgin desi girl who can cook like a maa-sterchef he was told she is, and is in a serious relationship with her vibrator.

Now Ravi is trying hard not to judge, because he is a self-proclaimed ’male feminist’. And Rita, who is rather nonchalant about her true self being thus revealed, has other issues on her mind. Ravi decides that Rita isn’t the girl for him, and the moment he’s out of her house, he’ll get on with his search for a suitable Indian bride. Rita is just glad she’s dodged another one of her mother’s attempts to set her up. Alas, neither is going to be easy. Ravi’s stay gets extended for a night, then three days and finally he ends up staying back for a full week.

A strange, unexpected bond begins forming between the two as they pull down the walls in their heads and hearts, one by one. They understand, communicate and inspire each other. But will opposites attract? Who knows!

I LOVE the way this film looks and sounds!

We need to talk about Rita’s home! As Karan Soni’s Ravi rightly puts it, Rita practically lives in a museum. And if you, like me, have watched and loved Broken Hearts Gallery (Amazon Prime Video), you’re easily reminded of the home of Geraldine Viswanathan’s character in the film. Not as cluttered or an ode to past relationships, but Rita’s home does have that hoarder vibe, which partly arises from her lack of cleanliness and order, and partly from her own mental health, which it becomes evident later, is not in a good state either. The home speaks a lot about Rita’s personality, of how there’s layers and layers of garbage, and everything’s locked or hidden, but one only needs to dig through all that, and turn it the other way to see who she really is underneath it all.

I love the film looks; it reminds me of these warm summers which you’d rather spend indoors with your friends or an SO, sharing stories and getting to know each other better. It can get stifling at times, but for the most part, it’s just the summer when love can happen.

The music is perfect accompaniment, and I particularly like how the final scene sounded. There’s also this one song ‘Mummy Bolti Hai’, which Ravi and Rita danced to, that I actually enjoyed quite a bit. Those lyrics are fire!

7 Days isn’t exactly a novel story, but that didn’t stop me from falling for it 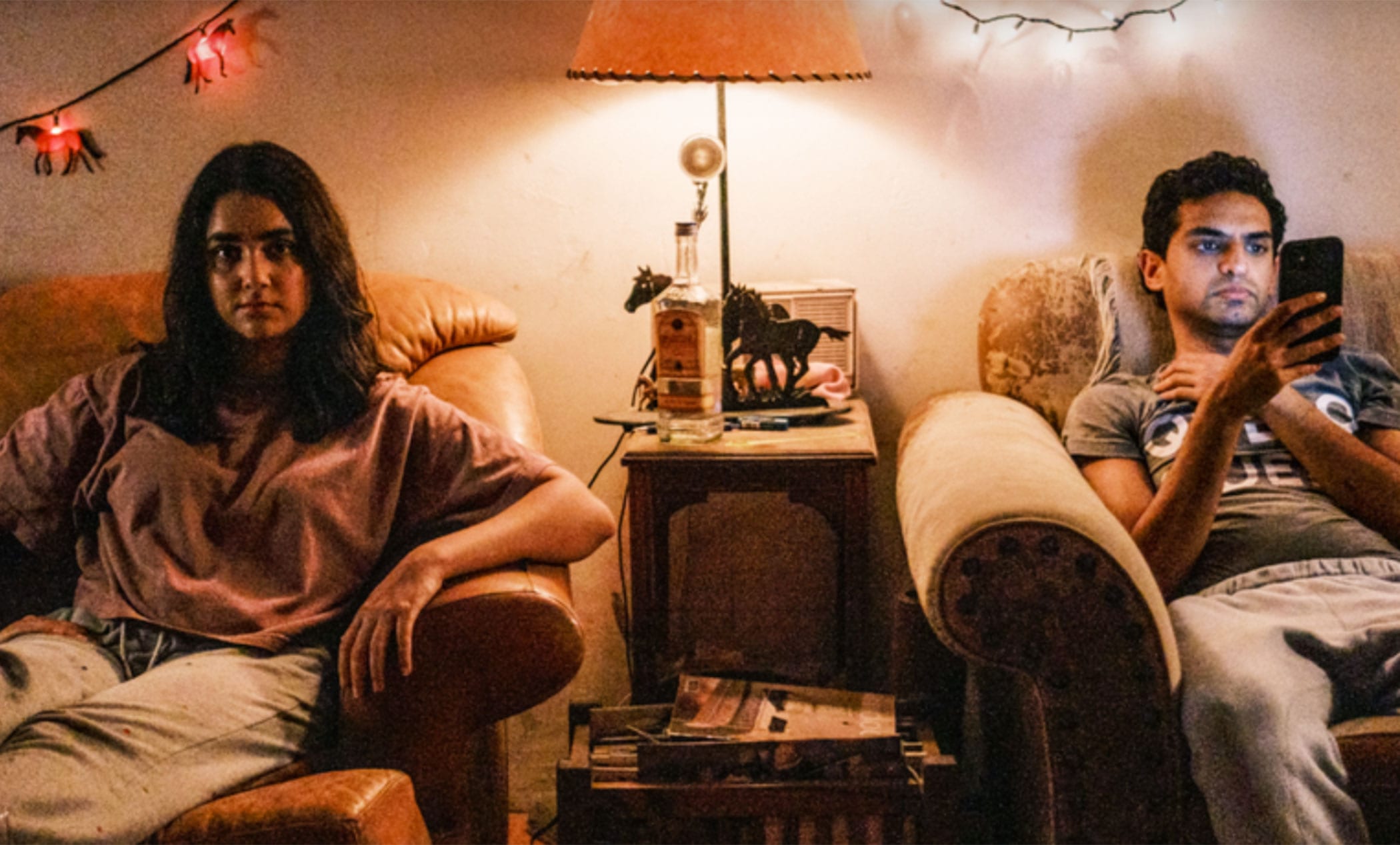 I’ve realised that meet-cutes in rom-coms are getting this much needed overhaul. In another film I watched at Tribeca, called Mark, Mary & Some Other People, the girl and guy meet while the girl is buying a pregnancy test. He even accompanies her, into the bathroom stall, and sings for her while they wait for her result. It’s so unique, fresh, funny and fascinating! I really liked how Ravi and Rita meet in 7 Days, because I have been on that date, where something one of you has planned goes completely wrong so you keep apologising, or you have to filter what you’re saying to not show all your crazy in the first date. Or making up your mind even before an hour is up how this one is going to end.

I initially did think that Ravi and Rita were quite the Indian American cliché, in that Ravi was the nerd who’d call his mother for everything and Rita was this rebel who shunned all her Indianness and became a complete American. However, I learnt quite a bit about the film from the filmmaker and cast Q&A, the most surprising of which was what a multi hyphenate filmmaker Roshan Sethi is when it came to what all he had accomplished. Sethi is also a doctor, and he and actor Karan Soni co-wrote the script during the pandemic, shot it and got it ready to be screened at Tribeca. They’ve added their own instances of going through such arranged marriage dates and the kind of profiles you’d find on Shaadi or Match, or how Indian mothers are the same everywhere when it comes to pestering their kids to get married. And all of that comes through so well, lending this film a very familiar vibe.

The film is very well paced. The relationship between Rita and Ravi, the way it evolves, feels organic and never like it is being forced or rushed into anything because the movie needs to end in a certain way. And even though it steers very close to familiar Bollywood romance tropes like caring for someone bringing you closer or the manic pixie dream girl causing a transformation in the otherwise boring and shy guy, it actually manages to smoothly avoid collision, that otherwise would’ve made me go “No, not this again”. Yes, a lot of the second act is cliché and expected, but then again, love is the biggest cliché there is. The fact that the film ends the way it does and where it does saves it from being too Bollywood cliché.

Geraldine Viswanathan and Karan Soni are the heart and soul of this film, all the way

This film is easily a two-hander that couldn’t have been all that it is without Geraldine Viswanathan and Karan Soni. They are the heart and soul of this film, and if I began listing all the scenes that they made me smile or go “aww” in, we’ll be here for 7 days. Their power hit me at full blast with the scene where Rita spikes Ravi’s drink with whiskey and they do everything from dancing to standup, to shedding all their inhibitions. And then on it was just a total *heart eyes* fest.

Geraldine Viswanathan really makes Rita a character that you can care for and want to see get all that she wants. Soni’s Ravi is probably a guy I’d not like during a first date! But you can see why he grows on Rita gradually, as she uncovers and even encourages aspects of his personality that are repressed. And Soni plays it out with such sincerity and nuance! I loved his dancing, yoga, and the genuineness with which he does his Zoom calls and standup comedy!

Both actors have such great chemistry together, making you root for their characters’ happy ending. According to executive producer Mark Duplass, director Roshan Sethi had the film’s first draft ready just after three weeks of shooting, and it was so good. And that couldn’t have been possible without the actors putting their best foot forward!

The film makes an important point about love and arranged marriages

The situations that the writers have chosen to bring this couple closer are fun motions to go through. Trying alcohol and throwing a no-inhibitions dance party, learning to cook, gatecrashing your friend’s date and then texting them pointers on what to say, watching a movie together, cracking bad knock-knock jokes and talking about sex. In fact, if you think about it, these are things that you’d do with friends too, probably during a house party or a trip, and these would turn into bonding moments that bring you closer. What I like though, is that at no point, is there any judgement for why each is the way they are.

There is a constant debate on whether love marriage or arranged marriage is a better option. But what 7 Days suggests is that the correct order will always begin from friendship and getting to know each other minus inhibitions and judgement. In a love marriage, you may be in love for 7 years, but when it comes to finally living together, you can’t stand each other for even 7 months. On the other hand, in an arranged marriage, you might’ve known each other for barely 7 months, but just 7 days of living together or getting to know each other deeply and without judgement might be enough to keep you together forever.

So love or arranged? Either, but perhaps first, live-in!

7 Days is likeable when it begins and then grows on you as you watch it, just like Rita and Ravi grow on each other. The actors’ performances instantly endear the film to you and as the longest arranged marriage date ever progresses, you grow to care and root for them, while laughing and smiling all the way. There are plenty of reel and real COVID love stories out there. And you won’t regret getting to know this one!

This review is part of our Hauterfly x Tribeca Film Festival series.