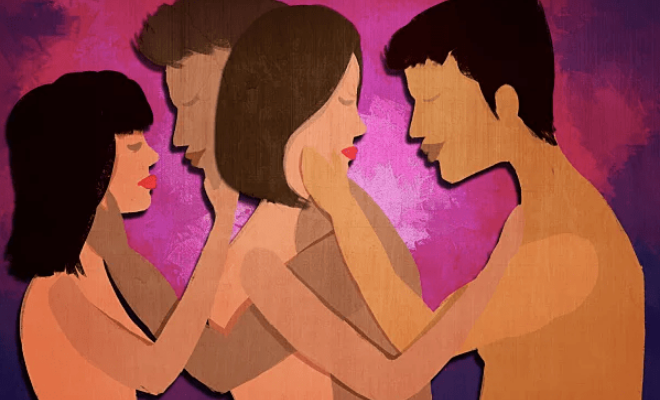 A few weeks ago, I watched a documentary on polygamy called Three Wives One Husband and it isn’t very difficult to guess what it was about. However, what made it truly interesting was that the wives weren’t completely above jealousy, even though they weren’t into monogamy. I still don’t know how I feel about it because we’ve normalised monogamy to such an extent that any other arrangement (polyamory or polygamy) seems faulty to us. Possibly, the way it took a long time for the world to finally start normalizing same-sex relationships.

We’ve grown up to believe that platonic love can be shared between several people but romantic love is supposed to be for one person alone. There’s a lot to debate on when it comes to polyamory, and people cannot imagine how can one be okay with their partner sleeping with someone else. I am too possessive to be okay with that so honestly when I was watching the documentary, I couldn’t imagine myself in those women’s shoes. Like I would have anxiety all the time if I was in an open marriage. But guess what? Every person is different and their preferences are different. Poly individuals find it hard to attain satisfaction in monogamy.

While one in four Americans have been in Consensual Non-Monogamous Relationships at some point, a recent study suggests that fantasizing about the same is rather common among people in monogamous relationships. Such partnerships allow individuals to have multiple sexual/romantic partners outside their primary relationship, and with the consent and knowledge of all people involved. There are no fixed rules in polyamory, it can be a triad, a quad, etc. Either way, the main component is trust and mutual consent.

Study author Justin J. Lehmiller said, “Searches related to polyamory and open relationships have increased on internet search engines over the past decade (Moors, 2017). At the same time, “how to” books and guides to CNMRs have begun to proliferate, and increases have occurred in both popular media depictions and coverage in mainstream news outlets.”Lehmiller aimed to examine whether monogamous couples fantasise about CNMR and how does it play out for them.

People were also asked if they wanted to ever actualize their fantasies and if they have communicated about them to their partners. After that, they completed personality assessment based on their “attachment anxiety and avoidance, erotophilia, sexual sensation seeking, relationship satisfaction, and the Big Five Personality Inventory.”

The study revealed that 33% of the participants said their favourite sexual fantasy was having an open relationship or multiple sexual partners. But would they really act it out? 80% people said, at some point, yes.

“The present research confirms the important distinction between sexual fantasy and sexual desire in that not everyone wanted to act on their favorite sexual fantasy of all time. This suggests that fantasies may serve different functions for different people,” Lehmiller said. He also pointed out that for some this fantasy was a result of a high sex drive but for some, it was a way to add novelty to a primary relationship.

So why are these people afraid to fulfil their fantasies and desires? “This, coupled with the finding that fear and lack of knowledge are among the biggest perceived obstacles to enacting CNMR fantasies, speaks to the importance of destigmatization of consensual nonmonogamy,” says Lehmiller.

In fact, according to Psychology Today, the stigma around polyamory has people following it privately. “Due to the stigma that it often attracts, polyamory is often practiced privately and may be kept secret even from close friends and family. At least one in four polyamorous individuals have experienced discrimination, according to the non-profit organization Loving More,” PT says.

Research also says that people in open relationships or marriages are as happy as other healthy monogamous couples. Their relationship arrangement doesn’t hamper the peace in their connection. In fact, Psychology Today says such couples have “better communication skills, higher levels of trust, and lower tendencies toward jealousy than married individuals.”

This doesn’t even explore the tip of the iceberg but it helps us understand that such relationships exist and couples who are polyamourous are happy too. It’s not cheating when all the individuals consent to it. I guess, to each his own!

ALSO READ:I Know This Casual Romance Will Not Last Forever But Here’s Why I Feel It’s Worth It