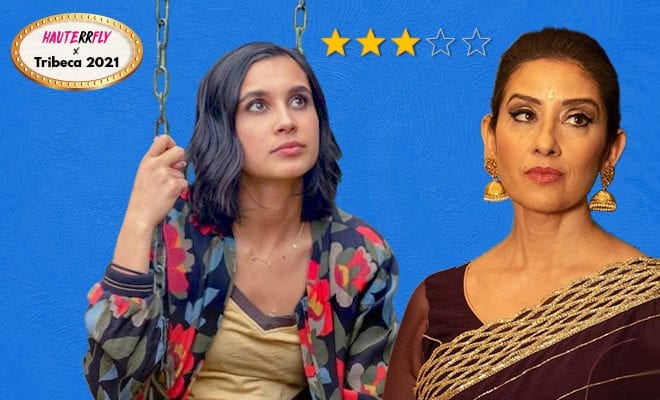 The 2021 Tribeca Film Festival is just another one of those notes in my pandemic silver linings playbook. While hordes of New Yorkers attend the festival in person in the city, one of its very first events as the city goes back to normalcy, there’s some respite for those who would prefer to attend it virtually. And a golden opportunity for someone like me, who can attend the festival from the comfort of my home, entire continents away. While the entire Tribeca slate excited me immensely, I was pleasantly surprised to see a feature and a short from India, and a few more films that featured stories of and by the Indian diaspora. And one of those was India Sweets And Spices, directed by Geeta Malik, which premiered at the Tribeca Film Festival. It is a coming-of-age film about an Indian American freshman studying at UCLA who returns home to New Jersey, where her family and the posh Indian American community they’re a part of, live in their own pretentious bubble of Pride & Prejudice. But my interest piqued phenomenally when I saw the cast—Sophia Ali, Manisha Koirala, Adil Hussain and Deepti Gupta, along with Rish Shah, Ved Sapru and more.

Now I will admit, my initial thoughts did steer me towards Crazy Rich Asians, considering the similarities in the non-conformity of the female protagonist, the rich Asians, and the way they treated outsiders in this close-knit community. But eventually, I realised that India Sweets And Spices reminded me of a Bollywood film much closer to home—Dil Dhadakne Do.  Was that a bad thing? Not really, because I loved that one. But did India Sweets And Spices pack a similar punch? Well, let me tell you!

What’s India Sweets And Spices about? A Mother’s forgotten recipe of non-conformity, served up by a daughter!

We meet Alia, a freshman at UCLA, who hates her parents’ pretentious and snobbish lifestyle, back in Ruby Hill, which is a posh suburb in New Jersey. In a style that is reminiscent of Pride & Prejudice, they’re part of a rich Indian American community where the ladies, clad head to toe in designer wear from Neiman Marcus, take turns to throw lavish parties every Saturday. Why? So they can dress up in jazzy Indianwear, and show off their wealth and find new things to gossip about. Oh and also, setup their children with each other’s, and constantly prod them about when they’re getting married.

Back home, the rebellious Alia, on a trip to the local Indian grocery store called India Sweets And Spices, meets Varun. She finds out that his family runs the store, and without a second thought, invites him, his parents and his younger sister to the party at their house on the weekend. A classic case of class privilege on full display makes Varun and his family feel insulted. But the worst blow is when Alia’s mother, the queen bee Sheela, refuses to recognise Varun’s mother, Bhairavi, who happens to be her Delhi University classmate.

As a shocking incident at the party shakes Alia to the core, she cannot help but dig deeper into her parents’ past and what made them the way they are today. In doing so, she not only finds strength to rebel herself, but she reminds her own mother, Sheela, of the forgotten taste of non-conformity, which was her favourite dish in her youth.

India Sweets And Spices balances the coming-of-age journey with Bollywood family drama, without one overpowering the other

During the filmmaker and cast Q&A, director Geeta Malik spoke about how, to prep the cast and crew to shoot, she made a Bollywood song playlist and a sort of sizzle reel of clips from Bollywood and other India diaspora films for her cinematographer to give them a sort of moodboard they could spring off of. And it surely has worked because the film does capture the look and feel of a modern Bollywood family drama. The colour palette is vibrant, and if we didn’t know this was New Jersey, the indoor shots could’ve easily been a posh Delhi home, hosting a party with songs like ‘Malang’ from Dhoom 3 playing in the background.

One of the things I was extremely glad to see was that the Indian outfits looked like there was some thought and effort put into getting them right. I could see myself in some of those clothes, and I thought Manisha Koirala’s sarees were pretty wearable. Having been burnt enough times by the costume department’s decisions to put Indian characters in the most hideous of clothes (Patil twins in Harry Potter), it’s really nice to get a win like this! 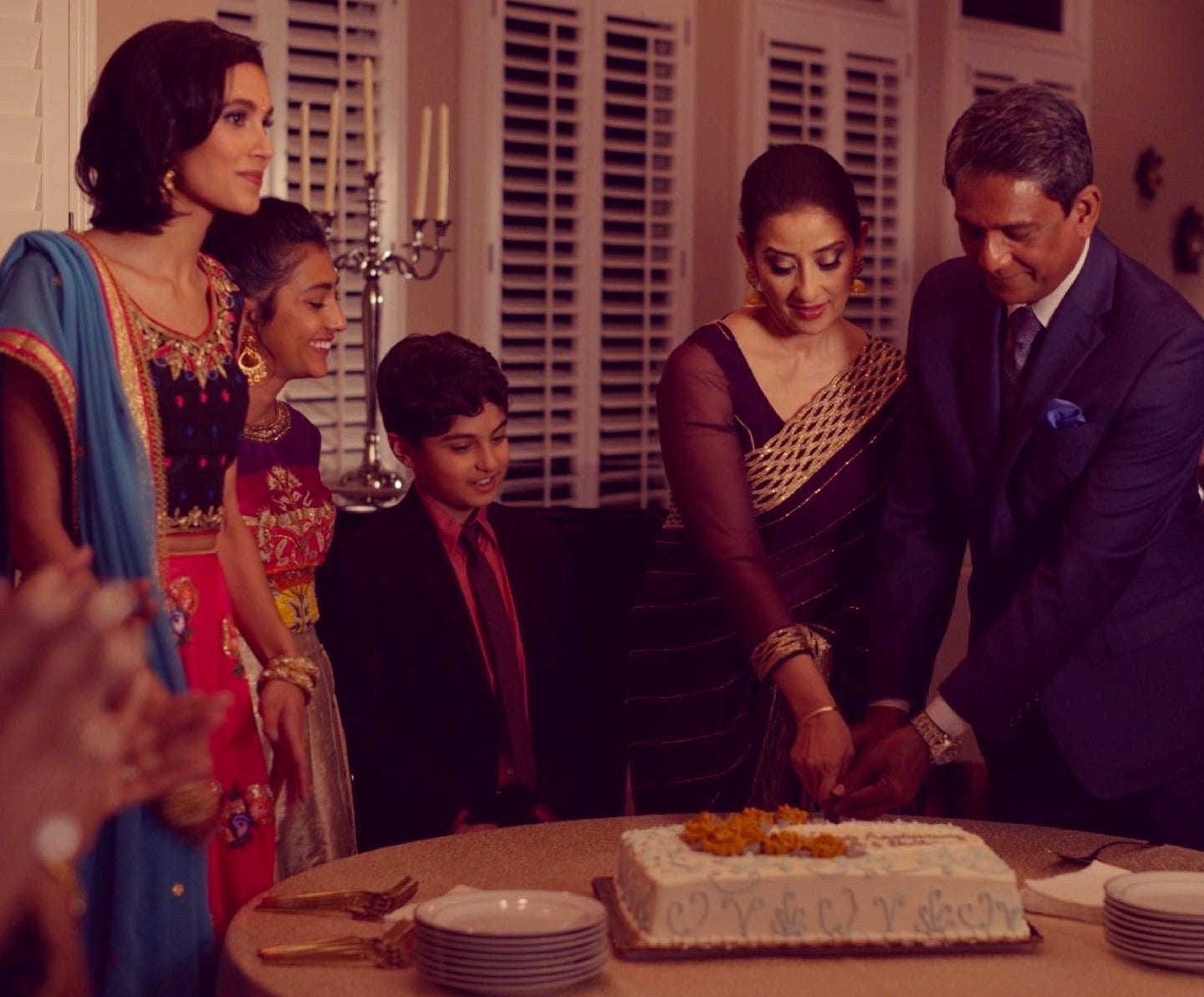 Little things in the film kept the setting believable, and even made me go, “Oh, I know people like these characters!”. For example, despite being rich, the family doesn’t seem to have a full-time housekeeper, and we see Sheela clean broken glass off the floor, or make rotis and serve her husband dinner. Sheela’s accent is dramatic and drawling, and notice particularly how she says the word ‘party’, and you will be reminded of NRI aunties talking!

Then, it was more so the dynamics between the characters and Alia’s character herself that made me bring up the Dil Dhadakne Do comparison. Just like Ranveer Singh’s Kabir, Sophia Ali’s Alia too is someone who thinks she is rebel and looks down at her parents’ pretentious ways. Just as Kabir meets Farah who belongs to the struggling working class, which is the trigger for his ultimate rebellion, so does Alia meet Varun, which doesn’t exactly drive her towards the ultimate non-conformist act, but steers her in the right direction. However, just like Kabir, Alia too is someone who fails to understand her own privilege and accept that she relies too heavily on it. She tells Varun that she has her own credit card, which she thinks makes her an independent adult and a rebel, but he reminds her of who pays her bills (her father). We often see Alia, otherwise someone who frowns on this display of wealth, spend most of her time in their mansion’s swanky pool. The very privilege that she hates her parents flaunting, she herself cannot live without.

Manisha Koirala and Adil Hussain’s characters too, resemble quite a bit of what we saw with Shefali Shah and Anil Kapoor’s characters in the film. A married couple that puts up a happy front, and is planning a huge anniversary celebration with the community, when in reality, it’s a hollow relationship that is standing only on co-dependency.

But what sets India Sweets And Spices apart, and makes me love it for this, is that the coming-of-age doesn’t happen because of a guy in Alia’s life, but is inspired by other women. And the transformation happens across both generations, as these women realise they don’t need to conform to these patriarchal roles and classism. And it’s okay if people are looking and talking.

Sophia Ali makes for a charming protagonist, and her Alia is easily likeable. My favourite scenes of her, apart from the most obvious one, is when she’s at the parties and has to deal with the parade of Indian Aunties who want to know when she and her childhood friend would be married. But I’d be lying if I said I had eyes for anyone other than Manisha Koirala most of the time.

Manisha as Sheela is such a presence, whether she is planning for a party, making snide remarks to head off a gossip monger, or doing her grand monologue in the film’s climax. I loved her crips outfits, those flamboyant yet classy sarees, and the way she just got into that character, oozing so much power but also this subtle vulnerability as if afraid that any minute it would all crumble down. Just like her, Deepti Gupta, who plays Bhairu, was another presence on screen that would instantly grab all your attention.

Adil Hussain’s character was a man who was a bit too detached and Hussain played the part with perfection.

Where it fell short?

The film had me engrossed in the lives of these characters from the start. However, it’s probably because of that that I felt, the ‘big realisation’ felt like it came too easily. Years and years of encrusted conditioning doesn’t just chip away this easy. I personally thought Alia taking such a huge step (no spoilers!) felt too soon in her coming-of-age trajectory, like it hadn’t sunk in properly for her to be able to do this so early. And that’s where the Bollywood takes over, I think, because the climax scene, even if funny, felt a little over-the-top and unconvincing. It isn’t exactly a dealbreaker for me, but I do wish there was more gravitas and less levity in there.

I think the film had me when it showed Indian Aunties and Uncles dressed in their designer desiwear, parking their swanky Audis and BMWs, to make their way to a party… set to Sheila Ki Jawani!

But on a serious note, India Sweets And Spices is a fun coming-of-age story that, despite being set in the Indian American community in United States, could be just as relevant in the urban India. After all, Indians everyone are plagued by the same issues that affect their roots—the caste and class struggles and a burdening sense of conforming to patriarchal ideas. And that’s why Geeta Malik’s serving of non-conformity in Indian culture, drizzled with smashing the patriarchy, calling out class privilege, and empowerment makes for a unique coming-of -age story that is perfectly palatable. And that dash of Bollywood is just the zing it needed to make it a recipe for the books!

Watch India Sweets And Spices for all this, and some pretty enjoyable performances by Sophia Ali and Manisha Koirala.

This review is part of our Tribeca Film Festival coverage.