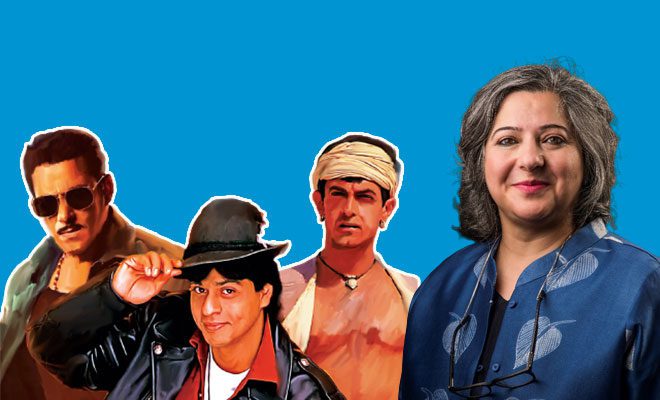 The Three Khans: Kaveree Bamzai Chronicles The Evolution Of Bollywood’s Troika And The Nation Obsessed With Them

When Fabulous Lives Of Bollywood Lives was announced on Netflix, the excitement around it was palpable. Who doesn’t want an look inside the lives of the rich and famous? The excitement came crashing down because there wasn’t enough juicy meat to peel off the show’s bones. But it still offered a clear indication that as one of India’s dominant ‘soft’ religions (the other being cricket), the allure of Bollywood and the secret lives of its superstars was still a potent draw. And yet, The Three Khans And The Emergence Of New India, a book by independent journalist Kaveree Bamzai, isn’t about juicy scandals or stark revelations. Instead, it lends socio-political context to the rise, fall and everything in between of Bollywood’s holy trinity—Shah Rukh Khan, Salman Khan and Aamir Khan—and evolution of the nation that is obsessed with them. And in that, it offers a very interesting insight into how our changing nation and its people might’ve influenced the superstardom and the career choices of these three Khans. And of course, vice versa.

Coming soon to a bookstore near you! Kaveree Bamzai’s The Three Khans and the Emergence of New India, which explores the three Bollywood superstars’ rise to fame, the movies that made them and why Indians love them so much.@kavereeb#thethreekhans #khansofbollywood #newindia pic.twitter.com/DTL6UKot5W

Who is Kaveree Bamzai?

Having been an independent journalist for over thirty years now and writing about cinema, amongst other things at news publications like India Today, The Indian Express and The Times of India, Kaveree Bamzai is in a unique position to write about the topic she has chosen. She inherited her love for cinema from her late father, and that’s what prompted her to begin her journalistic career as a sub-editor / film reviewer for The Indian Express in Ahmedabad in 1988. She went on to become the first and only women editor so far of India Today.

Currently, Bamzai is associated with several causes and part of award jury committees, while continuing to talk about topics like youth, cinema and gender across her social media.

What’s The Three Khans About?

Naam toh suna hoga? And if yes, then the title The Three Khans And The Emergence Of New India is pretty self-explanatory of what it intends to talk about. Today, Bollywood is no longer under the indisputable reign of a few superstars, thanks to the story finally being acknowledged as the true king, and actors completely dissolving their personas into their characters for authenticity. There’s also the emergence of multiplexes, and most recently, streaming platforms, which has completely transformed the landscape of entertainment, and flipped the power dynamic on its head, already on shaky ground since the debate around nepotism began gaining momentum.

But Bollywood hasn’t completely shed its old habits, not yet. There are still vestiges of its former self, none more stronger than the allure of its three kings, Shah Rukh Khan, Salman Khan and Aamir Khan. These three actors are contemporaries, having begun their acting careers around the same time, albeit adopting very different approaches and carving their own unique niche that neither of the other two could successfully invade. SRK is the romantic, the surreal, the experimental, but someone who can’t ever truly shed his star persona. Salman Khan is the man-child, the common man’s bhaijaan, who sticks to a formula he knows works for him and his adoring fans, because it channels so much of his own rockstar personality in it. And Aamir Khan is the ever-evolving cerebral one, the thinking man’s actor, who chases after perfection, because kaamyaabi toh peechhe daudegi hi.

And it has been a long journey since, more than three decades long, for them. Not all of it smooth and continuous rise, both on their personal and professional fronts. All three Khans are such celebrated personalities in the country, that much has already been written about their public and private lives, and the impact of their cinema.

However, what Kaveree Bamzai does in her book is begin at the start of this Bollywood triumvirate’s journeys and juxtapose it with the country’s political scenario and social issues rampant at the time. Bollywood has never been in vacuum or silos; it has often found itself bedfellows in politics, the mafia, and the business world. Moreover, these three Khans started making noise in the industry at a time when liberalisation was ushered in, the otherwise secular fabric of the country was beginning to tear and make way for communalism, and films were becoming more about the hero who, as Bamzai quotes, “is from everywhere and nowhere in particular”.

What thus emerges gives the reader a deeper understanding into what powered the rise of these Khans and why they appealed to the collective psyche of the nation that was also shifting into modernisation and was until then obsessed with the angry young man persona of Amitabh Bachchan. And it doesn’t stop there. It also talks about how each of them carved this specific path for them that they might’ve had to reinvent a couple of years down the line, but they never truly abandoned. It worked for Salman Khan, sticking to this “40-year-old virgin” and action hero image. However, the other two Khans, Shah Rukh and Aamir, have seen both successes and failures in their experiments, with SRK still trying to find terra firma in this brave new world of Bollywood.

There’s also much talk about their friendships with their peers and each other, which are as fickle as fame, and still as shrouded in mystery as they are out in the open. And of course, their personal relationships with their girlfriends, wives, children and the way they choose to live in Mumbai’s Bandra—Galaxy Apartments, the palatial Mannat and an apartment that might not be as iconic a landmark but still well known to the keepers of Bombay’s history.

What I loved about The Three Khans

As I mentioned before, there’s lot written and revealed by way of gossip columns and celebrity chat shows about the lives of SRK, Aamir and Salman Khan. So I really wasn’t holding my breath for any startling secrets to be dropped here. But the book does offer a very pointed insight into what makes these three men tick, what drives them to choose one project over the other, and how they deal with the success, failure and mind-boggling adoration that their fans shower on them. The book also alludes to just how intertwined and codependent Bollywood and politics have always been, which makes me take a step back and ponder how much is real and how much is propaganda.

An important line of thought that Bamzai’s book explores is the country’s shift from secularism to communalism, with the former word being treated with a certain disdain. It’s interesting to read about how, in a country and a field (entertainment) that often looks at Muslims as ‘the other’ in the wake of communal riots and 9/11, these three Khans have managed to balance their stardom on the peak. The cognitive dissonance is real! At the same time then, all three of them have had to maintain a carefully constructed proximity and distance with religion so as to sustain their appeal amongst fans of every kind.

Another interesting observation that Kaveree Bamzai writes about in her book is the parallel exploration of the new India as we know it, particularly the rise of another ‘star’, Narendra Modi, and how he managed to overshadow all three Khans when he took over social media right before his 2014 election win. By doing that, it once again highlights just how important the country’s increasingly intolerant attitude towards secularism has shaped the actors’ choice of films and roles, business ventures, and associations.

Also Read: Aamir Khan And Kiran Rao Are Now Separated And The Internet Has Memes And Reactions

The book also weaves in little histories, anecdotes and quotes of other stars of this Bollywood galaxy, whose lives intersected with the three Khans’ lives, such as Sanjay Dutt, Ajay Devgn, Akshay Kumar, Amitabh Bachchan, Hrithik Roshan, Juhi Chawla, Katrina Kaif, Karan Johar, Yash Chopra, Aditya Chopra, and more. It even goes on to explore the next generation of actors, ready to take on the superstar mantle—Ranveer Singh, Ranbir Kapoor, Ayushmann Khurrana—as well as character actors that have grown popular thanks to the rise of OTT and story-backed films—Nawazuddin Siddiqui, Pankaj Tripathi, Jaideep Ahlawat and more. But we all know, perhaps, there won’t be a mantle to pass, because the Bollywood is no longer a princely state. It’s starting to turn into a very unpredictable democracy.

The books ends in anticipation, as is the entire country right now, to see just how these dinosaurs of a Bollywood of the past who had their own meteoric rise, survive the other meteor that is changing their ruled kingdoms forever.

What I wished was a little better

I don’t think writing a book chronicling three decades worth of history of three such individuals would’ve been an easy feat. And for the most part, Kaveree Bamzai pulls it off quite well. She cites a pretty great amount of work, from newspaper articles to books to interviews with equally insightful remarks, to supplement her own observations about the film industry.

That being said, I did find that it got a tad redundant at times, probably because we were going back and forth on the timeline between to examine the lives of the three Khans, so certain things were bound to be repeated and talked about a lot.

In a world that is increasingly recognising that the personal is political, film stars are now more than ever required to be open about their political views, and be as real and candid as possible on social media. With Hollywood setting examples with its stars speaking up against the Trump presidency or establishing the #TimesUp movement to support the #MeToo wave, and even speaking vociferously about social movements like #BlackLivesMatter, the Indian youth is looking to its Bollywood stars and cricketers no longer as deities of the religions it practices but as influencers capable of social change who need to raise their voice.

At such times, a book like The Three Khans helps us understand what makes these stars who they are, why they do what they do, and why they sometimes don’t do or can’t do what we expect them to. It pretty much humanises them, particularly when it talks about how broken they were with their failures or how addicted they are to their vices or how ruled they are by their insecurities. An interesting read!