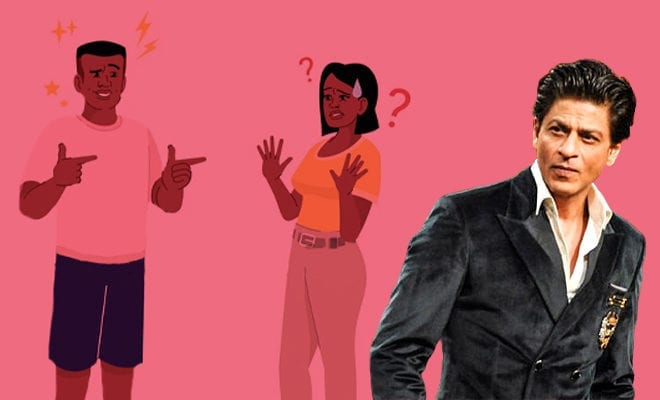 From Raj in Dilwaale Dulhaniya Le Jaayenge, to Rahul in Darr, to Aman in Kal Ho Na Ho, Shah Rukh Khan aka King of Bollywood has given us quite a few movies in his career that may have gone ahead to inspire the roadside romeos into professing their love in the most creepy ways, but he doesn’t ascribe to that philosophy in real life. On-screen Shah Rukh Khan might be a tad bit OTT, but off-screen Shah Rukh Khan is a gentleman.

In a recent interactive session by Shah Rukh Khan on his social media handle on Twitter, Shah Rukh engaged in what he called an #AskSRK session with his fans. Pretty straight forward in its meaning, it was a way his fans could reach out to him with questions that he would answer, with his signature sass, wit and humour.

And while there were quite a few interesting questions, equally charming replies from King Khan, one in particular that caught our attention was when a Twitter user asked Shah Rukh Khan for tips in helping him to woo a girl. The user wrote, “@iamsrk ladaki patane ke liye ek do tips do #AskSRK,” and the DDLJ star had just the right thing to say to him.

Start with not using the word ‘Patana’ dor a girl. Try with more respect gentleness and respect. https://t.co/z1aJ0idK0t

Addressing not just his question but the way he put it up, SRK instantly schooled him on how the first step would be to not make use of the word ‘patana‘. He wrote, “Start with not using the word ‘Patana’ for a girl. Try with more respect gentleness and respect.”

There may be many oles Shah Rukh may have played on the screen, coming up with “6 din ladki in” schemes but it’s important to realise that real life is way different, and that a girl must be treated with respect, honesty and dignity and not like a trophy that needs to be won. Full marks to King Khan for his words!

Also Read : To Mark 25 Years Of DDLJ, A Statue Of Shah Rukh Khan And Kajol Will Be Unveiled In London’s Leicester Square!