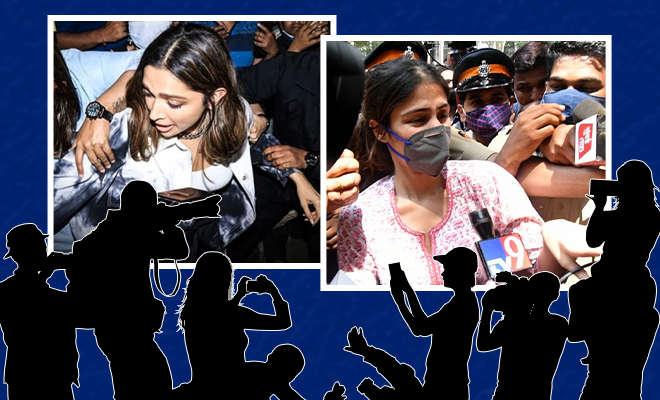 The Mobbing Of Female Celebrities Needs To Stop. It Is Scary For Them But What It Says About Us Is Worse.

In India, we love to deify things and people. We get a lump of rock? God. We see a potato that’s got an unusual shape? God. Cricketing legend? God. South Indian superstar with killer swagger? God. Doctor who saved lives? God. No wait, that’s justified. The point being, we don’t believe in just being fangirls or fanboys; we want to be bhakts, worshippers, devotees. And the one thing we know about devotees in India is that they always want contact with their God. Touch their feet, touch their arm, give them a hug, stand close, take a selfie. With inanimate idols, that might work. But when it is real people, we forget that these Gods are actually humans, despite our belief, and what we are doing violates their personal space. We saw it recently with Deepika Padukone, didn’t we? And we’ve seen it countless times before with other female celebrities too.

Last month, actress Deepika Padukone was leaving a restaurant when the paparazzi tried to, as usual, shoot their shot. The video is rife with those typical shouts of photographers, who we know are trying to do their jobs, asking DP to give just one more pose and hold back for one more minute so they could get another perfect shot of her. But discernible amidst that cacophony of, “Deepika Ma’am! Ma’am please ek aur? One more? Idhar dekho ma’am!” were the calls of a hawker who was trying to sell tissues to the actress.

You’d think she joined the throng because she was starstruck, but soon enough, we see her literally pull at Deepika’s hand bag, which her security then reclaims before she slides into her car. That, can easily be terrifying. Yes, even if this is something she clearly has faced before. It is still as uncomfortable and frustrating, because everyone can get away with mistreating her in that crowd, but if she were to lose her temper, her poise, or smack someone… we’d be looking at abusive Twitter trends and debates on the moral legitimacy of her reaction for days.

This is a sad reality that many female celebrities have to face, on a daily basis. I know you’ll say, but they signed up for that fame, didn’t they? But I feel like getting mobbed by fans who wouldn’t think twice before putting hands on your orifices was something that shouldn’t even be in the fine print. What, really, is the need to touch a celebrity to prove your devotion to them? What is the fascination? Is it like by touching them, you transmit some of their fame and fortune to yourself?

There’s also an added layer of sexism here, in that female celebs have to be extra conscious of this possibility. Most of these incidents happen during their outings or events. The women have to be mindful of their outfits, avoid malfunctions and a million other mishaps, while dealing with the mob that is dying for a touch. If you want to know how it feels, think being a woman travelling in a crowded bus, with men who are finding reasons to rub up against your body. What depraved pleasure is derived from this, only they know. For you, and for these female celebs, it is literal hell, that could escalate quickly.

Also Read: Deepika Padukone Gets Mobbed While Leaving A Restaurant And Struggles To Secure Her Handbag. How About Some Personal Space?

Remember when Katrina Kaif got mobbed during the promotions of Tees Maar Khan so badly that costar Akshay Kumar had to act like her personal armour to navigate through the crowd? Or that horrible episode of Kareena Kapoor Khan getting overwhelmed by fans during the promotions of Bajrangi Bhaijaan? Sushmita Sen had once been mobbed too when she was exiting an event in Pune, and was so flustered that the pictures made you uncomfortable. And more recently, when Rhea Chakraborty was mobbed by the paps, no less, smack in the middle of COVID lockdown, social distancing be damned.

A hundred men their cameras touching her violating her space her body This could be you tmrw But you will choose silence because watching this is fun right now She is the villain of your amoral world A country whose PrimeMinister claims to champion womenrights #RheaChakraborthy pic.twitter.com/kdFQVaqn88

And then people have the audacity to ask why actress dressed in bikinis during their remote island vacations are suddenly donning salwar kameez when they come for these proceedings. Why else do you think, dumbass? How else do they protect their bodies from your inappropriate roving eyes, and non-consensual touch when you mob them?

We often seen photos of international celebs walking their dogs or stepping out for coffee or driving around town to shop. Okay maybe it is happening just in fancy neighbourhoods like Beverly Hills, Rodeo Drive or Malibu. But it is happening, right? You think Big B can walk around Juhu without a mob following him? Can Hrithik Roshan pop into the Juhu Starbucks for a double shot espresso without a swarm of people descending on him? Of course not. Or could it be worse if it was Katrina Kaif, Tara Sutaria or Aishwarya Rai Bachchan instead? Of course.

Also Read: Guilty Or Not, Nothing Justifies The Media Mobbing Rhea Chakraborty. The Invasion Of Her Personal Space Needs To Stop

Saved by the male

One of the most ridiculous things is how the only solution to this mobbing problem is for the closest male to intervene. I recall reading this news item years ago, when Nargis Fakhri was shooting for Azhar with Emraan Hashmi, and a fan got a bit too obsessed. He would keep clicking pictures of her, despite her request to stop. Finally, Hashmi and to step in and talk to the fan, post which the fan stopped bothering the actress.

Telling the fans off. Telling the paparazzi to back off. Forming protective circles around the female celeb—it’s like this reiteration that a woman needs a man’s protection to keep her from getting mobbed, molested and attacked. We sure know how to make a woman feel safe, don’t we?

Nobody likes getting mobbed and touched inappropriately, not even male celebs

Yes, believe it or not, that is true. Nobody, man or woman, likes to be swarmed over by strange people putting their hands all over their body like their personal space and permission don’t matter. I mean, would you like that if the places were swapped?

In 2017, when Harry Styles was performing on stage, he got groped by a fan who put their hand on his crotch while the singer knelt on the edge of the stage while performing, surrounded by crazy, screaming fans. He continued with this act as if nothing had happened, but you could feel from the way he moved away and didn’t return to that patch of the stage, that he felt violated.

Female and male fans have been known to get too uncomfortably close to male celebs, because there’s this faulty preconceived notion in our heads that only touching women like that is inappropriate. Men don’t mind it. But actually, they do. Why wouldn’t they? It’s fucking scary because you cannot predict what might happen next!

Can we start with reining in the paparazzi and obsessive fan-ing?

Honestly, as someone who works in media, I know this feels like a very highhanded statement. And I do understand how the industry works, where half the time the mob of paparazzi and fans are present because a celebrity’s PR team sent out blasts that they’re going to be there. But that being the case, none of these celebs have declined to pose, have they? And maybe if they have, can we not respect that and be happy with whatever photos we’ve gotten?

Do they need to be mobbed with cameras and microphones thrust in their faces, hurting, pinching, and getting inappropriately close to them? Similarly, when fans are gathered for these events, can we just not do our hero-worshipping from afar? Do we need to make close contact, much to the celebrity’s discomfort?

In our schools, in local trains, in temple queues, in doctor’s clinics even, we have separate spaces for men and women. That’s how much we’re concerned about inappropriate contact. But when it comes to celebrities, we forego all rules, sexist or otherwise, and let this shit go down?

When does this stop? And if you still cannot understand why it needs to stop, just put yourself in their position, and see if you find it hard to breathe in that stampede of people who can touch you but you can’t hit them back. Scared? Now you know.