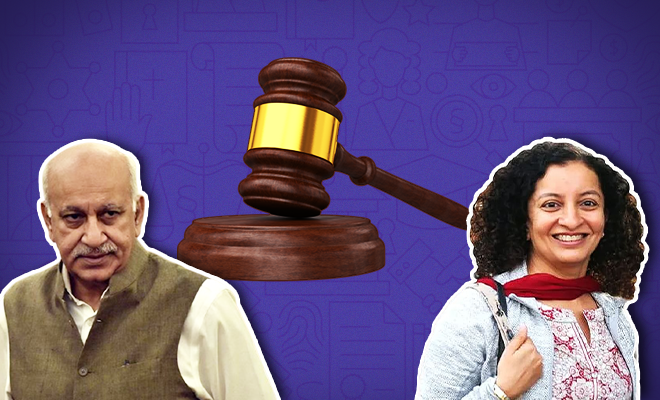 Verdict In MJ Akbar Defamation Case Against Priya Ramani Deferred. Why Justice Delayed In #MeToo Cases Is Detrimental To The Movement

On February 10, Wednesday morning, Twitter was abuzz with anticipation as the verdict in the defamation case filed by former Union Minister MJ Akbar against journalist Priya Ramani was going to be pronounced. Ramani, in an article she wrote during the #MeToo movement in India for Vogue in 2017 and a subsequent tweet in 2018, had alleged sexual harassment at the hands of her boss, which she later revealed to be MJ Akbar. The latter denied these allegations, and filed a criminal defamation case against Ramani, stating that what she wrote is fictitious and threatened to damage his “stellar reputation”. Since this is a defamation case, the burden of proof is on Akbar, the plaintiff, to prove that the statements made were false and this damage indeed happened.

Social media was clamouring in support for Priya Ramani, in the hopes that the judgement that comes out would be a landmark one, for sexual harassment in the workplace, with at least one #MeToo case getting closure.

Whether or not Priya Ramani and Rebecca John succeed against MJ Akbar's claim that he didn't sexually harass multiple women, they have fought a courageous, excellent case. More power to such feminist, justice oriented litigants and lawyering. #istandwithpriyaramani

#IStandWithPriyaRamani because it requires tremendous courage to fight this battle and it's imperative that she knows that every woman in the workplace feels a little more empowered watching her, a little less scared to stand up for herself.

A landmark judgement will be made today, regarding the future of #MeToo in India and the vast consequences of facing, and inflicting, sexual violence. I hope we come out on the right side of history. #PriyaRamani #MJAkbar #IStandWithPriyaRamani https://t.co/zZw3m8XI5X

The verdict DOESN'T matter. For women, the courage to identify an abuser in power IS NEVER smooth. Believe people. Realise that someone can be good to you, and horrific to someone else. #IStandWithPriyaRamani

However, the verdict was deferred and will now be pronounced on February 17. Why? Because….

Yeah, you can imagine the disappointment.

It’s not far off to say that the real disappointment has been the long trajectory of the case, through with Priya Ramani has been a force to reckon with, holding her own in the power struggle with her alleged oppressor who clearly wields more power than her. I mean, as a fellow woman, I cannot imagine finding the courage in yourself to speak up about something so traumatic that happened to you all those years ago now. And then, having a defamation case slapped against you by this alleged oppressor! It makes a statement that a woman’s truth and cry for justice is below the right of a man to uphold his ‘stellar reputation’.

Priya Ramani stood up for all women, at great personal cost. Today a court decides not whether the man will be punished, but whether she even had the right to accuse him. A victory for her would not be a moment of triumph, but mere relief. #IStandWithPriyaRamani

October 12, 2017: In an open letter published in Vogue, titled ’To the Harvey Weinsteins of the world’ former Asian Age journalist Priya Ramani talks about being sexually harassed by an anonymous ‘male boss’. She talks about an incident in hotel room in 1994 with him.

October 6, 2018: Amidst the #MeToo movement gaining momentum in India, former Asian Age journalist Ghazala Wahab’s tweet called for the “floodgates to be opened about MJ Akbar.” A couple of other journalists second her.

October 8, 2018: Priya Ramani names MJ Akbar, former Asian Age editor, as the ‘male editor’ that she was alluding to in her Vogue editorial.

October 15, 2018: After having being accused by almost a dozen women of sexual harassment, MJ Akbar files a criminal defamation suit against Priya Ramani, the first woman to accuse him.

December 12, 2018: The Editors Guild of India suspends MJ Akbar in light of the allegations.

February 25, 2019: Delhi’s Patiala House Court grants bail to Priya Ramani for a personal bond and surety of Rs 10,000 each.

November 18, 2020: Additional Chief Metropolitan Magistrate Vishal Pahuja, who had been presiding over the case, is transferred out of the Rouse Avenue Court, replaced by Ravindra Kumar Pandey. Final arguments in the case are required to be made all over again.

A detriment to the #MeToo movement

The answer to the question “Did the #MeToo movement succeed or failed?” Is rather subjective. You could see the glass half full. This morning I woke to the news that Charisma Carpenter, who played Cordelia Chase on Buffy: The Vampire Slayer and Angel, made an official statement citing toxic abuse at the hands of show creator Joss Whedon, when she was pregnant during Angel filming. Carpenter was moved to speak up months after actor Ray Fisher, who played Cyborg in Whedon-directed Justice League for DC, has been fighting to have his similar abuse allegations against Whedon heard. Carpenter mentioned that the #TimesUp movement was also something that made her realise that she shouldn’t stay silent on the matter.

Many celebrities, including Jason Momoa have supported Ray Fisher, who thanked Carpenter for her courage and support. But Carpenter’s statement opened the floodgates to her costars Sarah Michelle Geller, Michelle Trachtenberg and Amber Benson also alluding that there was toxic and traumatising abuse happening on the sets of Buffy, from which many are still recovering after more than two decades. This is a pretty big deal, especially once you realise the irony that this happened with so many women on a show that was about a female hero defying gender norms and displaying strength and courage.

But then again, you could also look at this with the glass half empty attitude. Apart from Harvey Weinstein and a few other names, there haven’t been any major convictions or deliverance of justice yet. Especially in India’s Bollywood, the Earth continues to spin on its axis like nothing happened. Since the first #MeToo wave in India, more women have spoken up about filmmaker Sajid Khan sexually harassing them. Exploitation continues to happen. Women continue to not be believed, blamed and shamed for what is happening to them, and questioned about the delay in their speaking up. Just this week, MP Mahua Moitra was almost on the brink of facing action for bringing up the fact that a CJI managed to preside over his own case of sexual harassment allegations and have it dismissed.

Naturally, many women and organisations, journalists and publications have called out the law enforcement for lack of action against #MeToo accused, despite there being so many testimonies from women. One look at the MJ Akbar – Priya Ramani case can tell you that even if #MeToo allegations were to reach our courts, the red tape, slow procedures of the Indian judiciary and the power struggle that happens out of the court will ensure that the wait for justice is stretched as long as possible. And as we all know the saying, justice delayed is justice denied.

And this right here is the reason why so many women continue to remain silent. Because if their abuser is a minister, a rich man, or a person in power, then the cost of seeking justice is way too high. And one that not every woman can afford to pay.

The #PriyaRamani criminal defamation case is the epitome of what happens when a woman speaks out, and is told by powerful men that her truth is less important than a man's reputation. It's why many are waiting for the verdict today with bated breath. #IStandWithPriyaRamani