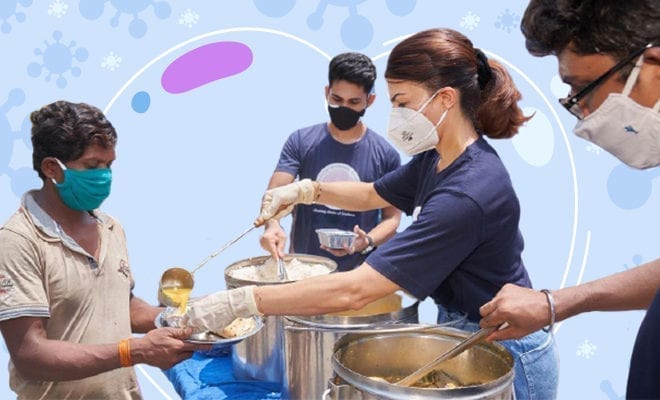 The Covid second wave is a tragedy that will haunt us for a long, long time. There’s just been too much loss, and the end doesn’t seem near, because a third wave is reportedly already anticipated. Mumbai is one city whose fighting spirit has always been talked about. It is the city that suffers tragedy one day, and picks up its bags and goes to work the next morning. Of course, this heavy reliance on the ‘spirit’ of the people gives many authorities a chance to slip off accountability, but that discussion is for else where. What we hope we also remember from these difficult times is how people stepped up to help each other. Right now, it is the Good Samaritans that are keeping this fighting spirit alive, and several celebrities have joined the fray to help out. One such Bollywood celeb is Jacqueline Fernandez.

The actress, seen in the dance number ‘Dil De Diya’ alongside Salman Khan for his film Radhe: Your Most Wanted Bhai, has recently launched her own You Only Live Once (YOLO) Foundation, which has tied up with several NGOs that are involved in Covid relief efforts. One such NGO is the Roti Bank Foundation, which is a tech-driven food rescue organisation (as per its bio), providing meals to the needy in this time of crisis. They take donations of surplus food too, which can then be shared with those who are unable to provide for themselves.

Also Read: 5 Thoughts I Had While Watching Salman Khan’s Dil De Diya From Radhe. Mainly, What Is Going On With Jacqueline Fernandez?

On Thursday, Jacqueline Fernandez and her YOLO Foundation tied up for a special initiative, where she not only helped in the preparation of the meals but also with distributing them. She can seen here, in the pictures, with former Commissioner of Police, Mr D. Sivanandhan, who has mentored the Roti Bank initiative.

Jacqueline also shared pictures of the same on her Instagram profile, talking more about the relief effort in her caption, which she began with a Mother Teresa quote. She wrote,

“Mother Teresa once said, ‘Peace begins when the hungry are fed’. I was truly humbled and inspired to visit Mumbai @rotibankfdn today, which is run by former Mumbai police commissioner Mr. D Sivanandan. Roti Bank has prepared and distributed meals to millions of hungry people till date, even during the pandemic.

They are the perfect example of what #kindnessbrigade aspires to do and I am honored to be of help to them during these times. We only live once! Let’s make this life worth it by helping others in need and sharing the #storiesofkindness of those around us!”

Jacqueline Fernandez is just one of several Indian and International celebrities who are using their following, industry connections, and privilege to help with the Covid relief efforts. Some like Alia Bhatt, Sidharth Malhotra, Bhumi Pednekar and so on are using their social media to amplify resources and aid messages. While some like Sonu Sood, Ajay Devgn and more are making arrangements for those who reach out to them for help. Just yesterday. Sood arranged for an oxygen cylinder for Suresh Raina in 30 minutes, after the cricketer tweeted that he needed it urgently. This morning, Anushka Sharma and Virat Kohli also announced their partnership with a crowdfunding platform to collect donations.

Similarly, Priyanka Chopra has been phenomenal in using her reach as a global icon to get international attention on India’s Covid crisis. Her and husband Nick Jonas messages for donations have been supported and shared by stars like Hugh Jackman, Sam Heughan, Richard Madden, and many more. Some other Indian diaspora celebs, like Mindy Kaling, Jay Shetty, Lilly Singh and more are hosting fundraising events as well.

It’s heartening to see people across the globe come together to help each other!