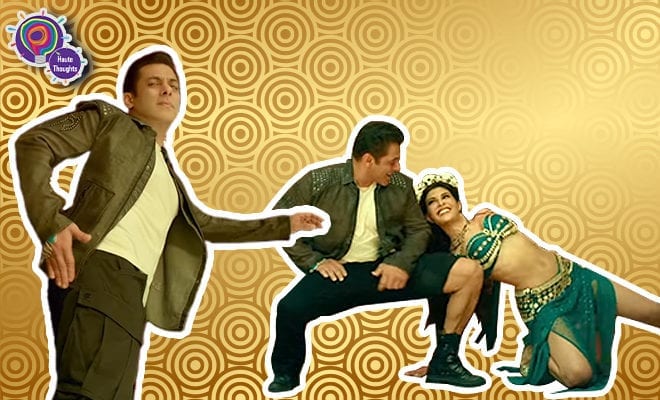 5 Thoughts I Had While Watching Salman Khan’s Dil De Diya From Radhe. Mainly, What Is Going On With Jacqueline Fernandez?

I’ve been writing my thoughts about Bollywood movie trailers and songs for a while now. It all started because of my eternal love for bad and cringy content. It’s weird, I know. But some things are so bad that they’re good. This song, Dil De Diya from Salman Khan’s Radhe, is not one of those things. It’s just insufferable. Period.

When I found out that Jacquline Fernandez was starring in the song, my hopes slightly increased. But it all came crashing down when I actually saw the video. Cringe-worthy is an understatement when it comes to this song. Here are five thoughts I had while watching the video of Dil De Diya. I want to say “have fun” but I don’t want to give you’ll false hopes.

1. Usually, when a new Bollywood movie is on the horizon the one thing that gets everyone excited is the songs. However, when we have movies like Radhe: Your Most Wanted Bhai being released, you don’t know what to expect because let’s face it, Salman Khan and good songs don’t exactly go hand in hand. Seeti Maar, much? I have heard Dil De Diya at least five times and all I can say is that I hate my job right now for making me do that. It’s ironic that Salman has such a command over his fans when all he does is tortures them with songs like this one.

2. Okay, I have a serious question. So pay attention. What on earth is up with Jacquline Fernandez in this video of Dil De Diya? I mean, she was a thousand times better in Baadhshah’s video of Genda Phool. And that is saying something. Not only is she dressed like a fisherwoman and then a mermaid for some godforsaken reason but she is also weirdly crawling on the floor for some reason. What is going on here? And where was the fancy dress party? The way Jacquline is dancing in this video makes me think the choreographers just gave up on her and let her do what she wanted. It’s shocking that Prabhudeva, the dance genius, directed this.

Also Read: 5 Thoughts I Had While Watching The Trailer Of Radhe: Your Most Wanted Bhai. Mainly Ki, Why Is Disha Patani A Prop?

3. Despite what you may think, the highlight of the song is not Jacquline flailing about. It’s Salman’s lifting up his pant leg while Jacquline leans towards it and does the wave dance move. No matter how hard I try, I can’t get the disturbing image out of my head. Salman should rigidly stick to things he knows. Intimidating looks, beating up people in a completely non-realistic way and of course, tearing his shirt off (It’s a weird flex that nobody wants to see either!). Dil De Diya and all its horrors are what happens when he digresses from these things.

4. Am I mistaken or is that a vagina made of lights in the background? Ugh. Only when I thought Dil De Diye can’t get any cringier, they out cringe themselves. Jacquline and Salman are literally dancing in front of a vagina. I get the whole cabaret vibe they were going for, I do. But remind me, what does cabaret have to do with a twinkling vagina?

5. No aspect of this song is connected. But as I said, what can be expected in a movie that has the tagline: Most Wanted Bhai? From Jacquline’s fisherwoman outfit to Randeep Hooda’s Matrix moonwalk moment in the end, I still can’t figure out what is going on. But maybe that’s for the best. Bollywood needs to do better. *sigh*

5 Thoughts I Had While Watching Janhvi Kapoor’s Nadiyon Paar. Mainly Ki, Why Must Bollywood Mess With Classic Songs?