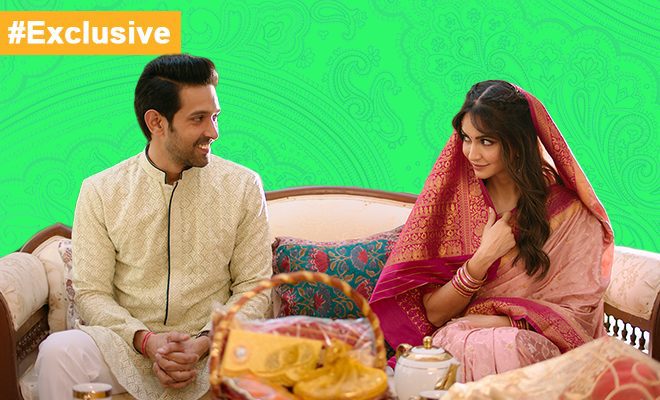 In India, for every “I love you,” being said, there’s some version of “Abba nahin maanege.” As if finding your one true love wasn’t already an exercise of Herculean proportions, it is still the easiest. Because what comes after—convincing the families, planning the wedding, and making sure all honour are preserved and egos unhurt—is more difficult than anything Ethan Hunt would’ve pulled in Mission Impossible. And if it is an inter-caste marriage? *turns around and runs in the opposite direction* Fortunately, the characters in 14 Phere decided to take this challenge head on instead of running away! Directed by Devanshu Singh, the film stars Vikrant Massey and Kriti Kharbanda as Sanju and Aditi, a couple that has to hatch an elaborate plans, replete with a set of fake parents (played by Jameel Khan and Gauahar Khan), fake relatives, and fake caste identities, to be able to marry their true love.

If you’ve seen the trailer for 14 Phere, it looks like an out-and-out entertainer that you can watch with the family, thanks to all the confusion that makes way for comedy. But perhaps, you can even pick a few lessons in practicality and putting your family’s happiness over ‘samaaj’ or ‘khaandaan ki izzat’, as the film touches upon the topic of inter-caste marriages in India, dowry, and honour killing.

As someone who comes from a blend of traditional and modern valued upbringing, I was most curious to see how 14 Phere managed to pull off the fine balance that needs to be struck in a good social comedy. And Team 14 Phere gladly answered! Read on to know about my conversation with director Devanshu Singh, Kriti Kharbanda and Vikrant Massey!

Devanshu Singh: I was lucky enough to get a hardbound screenplay by Manish Kalwani, who put so much hard work, effort and love into it. It had everything—the plotting, the characters—in place. It’s a dream for every filmmaker to receive a script that is good enough to take to actors and start pitching around.

Q: How did you ensure that the ‘fake parents’ trope didn’t become too frivolous or come with obvious loopholes that are hard to ignore?

Devanshu: We use it in very different ways here. It’s very on your nose—Yaahaan shaadi karne ka ek hi tareeka hai, aur woh hai nakli maa baap, jo ek baar ladki ke hain, aur ek baar ladke ke. Now the moment you have this, there’s confusion and in that, there’s quirky comedy. My intention was to keep things simple, clear and focused. The characters as you might’ve seen in the trailer—Sanju and Aditi—are adorable, simple, sweet people with a great heart and the right intent. So all I had to do was look around myself and take inspiration from reality.

Q: Aditi is an interesting character. She isn’t submissive but at the same time, a woman of very measured words who has her own way of rebelling. How did you make this character endearing?

Kriti Kharbanda: Aditi is one of those characters that I got to spend a lot of time getting to know. Unfortunately, when we were about to go on floor with the film, we had to postpone our schedule due to the pandemic to December. This gave me a good seven months to stay with the character, to work on how to understand her and to make sure that she does not come across as “bitchy”.

Yes, she’s someone who is calculative, smart, thinking ahead, and living in the moment. But she has to think ahead to figure out what the future is going to look like. Because she loves this man [Sanju, played by Massey] so much. She’s doesn’t want to go behind his back; she wants to walk with him. At the same time, she also understands that he rides on a certain emotion that she doesn’t.

I think what I love the most about Aditi is that moment when, for the first time, she feels the warmth of a family. I think that is something that I loved about the script, that the character was getting to experience this moment. And the fact that I was going to be portraying this on screen, and so many people were going to be watching this and saying, “Oh wow! This is a beautiful moment.”

A great film is made of some really great moments, and I’m so proud to say that 14 Phere has so many of those!

Also Read: In College, Kriti Kharbanda Took Action Against A Man Who Was Clicking Pictures Of Her Without Her Consent. 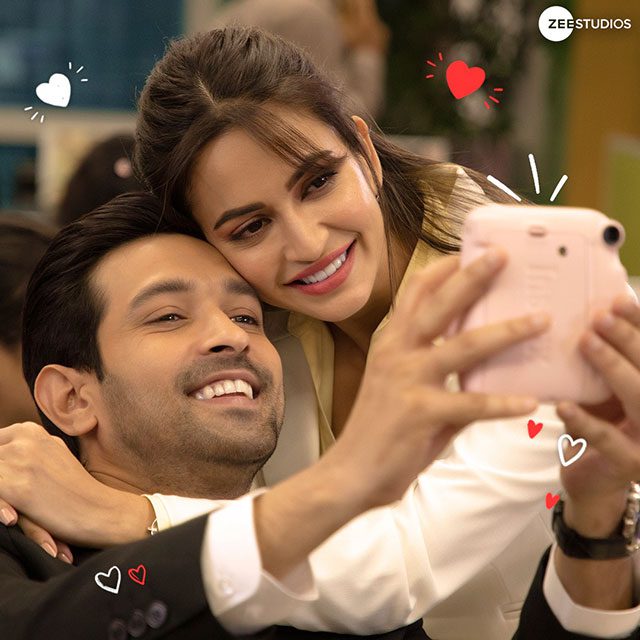 *Speaking of great moments, this was a very special one, because your’s truly is a huge Vikrant Massey fangirl. So of course, I told him that before asking him a question!*

Q: How much do you, Vikrant, agree or disagree with the motivations of Sanju, your character, who comes up with idea of fake parents and two weddings?

Vikrant Massey: I completely agree with Sanjay and I will back into the rest of my life! Sanju is someone who is very simple. He’s a passionate theater artist and a corporate employee who wants to get married to the love of his life and who also wants his family around him.

Yes, on face value, you could say that Sanju is manipulating things, but the intent is to still keep your loved ones close. The degree of agreement might vary, and to each their own. But Sanjay still wants his family around so he can look after his parents. His heart is in the right place.

The character is taking “alternate measures” to fix things which I think all of us have that tendency as humans. I believe all of us have tremendous possibilities within. And if simple ordinary people are pushed against the wall or placed in extraordinary situations, our survival instincts immediately kick in and we automatically start finding alternate routes. And this is exactly what Sanju does in tandem with Aditi. Because one thing is very clear with this guy that he loves his family, but he’s madly in love with this woman he has given eight years of his life to.

So I would definitely back Sanjay for the rest of my life. He’s a smart guy. He’s a hustler!

Also Read: Vikrant Massey Said His Mom Is Still In Touch With His Exes. That’s Awkward But Also Sweet

Q: How did you strike a balance between the film’s light-hearted tone and the subject, which is grounded in some serious issues like inter-caste marriages and honour killing?

Kriti: I think the idea was to talk to our parents in the film like we would talk to them in real life, not dramatized but having a conversation. This is not about winning. We are not saying “Ki humaari shaadi ho gayi toh aap haar jaaoge, ya nahin hui toh hum haar jaayenge.”

We were trying to put a point across in a conversation like how normal people would actually talk to one another. We wanted to show that despite everything, at the end of the day, what our parents want for is our happiness. It’s just that sometimes, they only need to be reminded of it, and vice versa.

Q: 14 Phere looks like a nice entertainment package. How fun is it, shooting a film that has two weddings, and an ensemble cast that has such great comic timing?

Vikrant: It was fantastic!You know, we had a great ensemble. I was very lucky to have an opportunity to work with Yamini Das ji again. This was my third collaboration with her. Gauahar and I have known each other for years now; we were next door neighbours. And to get an opportunity to work with someone like Jameel bhai, who is a veteran in theater and in cinema. So just to have an opportunity to share that space with them and get to understand what lies within their minds was a lovely learning experience for me. I think I’m going to carry forward a lot of things that I have imbibed on set!

Kriti: I have always believed the more the merrier. I love talking. I love chatting. And I love chilling! [Vikrant nods in agreement!] I feel like the more you connect with people, the more you realize how blessed you are to be in an environment that’s surrounded by people that are so talented. For me, it’s more the experience of just getting to know another person, not just in their character, but outside of it.

I don’t have a film background. I’ve been watching these actors on screen for so many years, and I have been fangirling at a lot of people, no qualms in admitting it! Especially when I met Vineet [Kumar] ji! I’ve watched him on-screen while growing up, and he’s someone, I admire so much and I love his work. By the end of the shoot, we had a relationship where in I’d just joke around with him or I could say anything to him and get away! I love creating those bonds. I am an all-or-nothing person, anyway. Either I get along with you really well and will become very good friends or I will say “Hi, hello!” and go away from there!

So I’m just glad that everyone on the set was as excited as I was to be there, and we had a lot of fun!

The film definitely looks like it is ready to shine, and I cannot wait to see it get its Chamak on!

5 Thoughts We Had About The ‘Feels Like Ishq’ Trailer: Romance Anthology With Such Cute Pairings? So Ready For Them Feels!