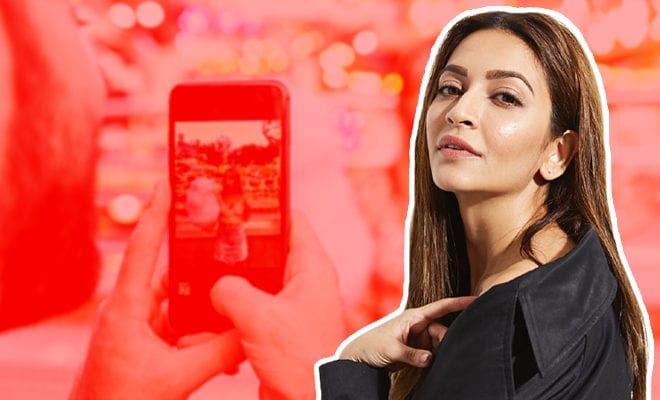 In College, Kriti Kharbanda Took Action Against A Man Who Was Clicking Pictures Of Her Without Her Consent.

I believe that a huge part of the college experience is participating in college festivals. I have taken part three years consecutively and it was absolutely the best experience ever. Of course, there was one incident that scarred me pretty deeply. It involved a foam party, inappropriate dancing and some groping. I will leave you to connect the dots. It was one of the most horrid nights of my life. Regrettably, I didn’t take any action. I should have because after that night, I spoke to numerous girls and they’d all been through something similar. It’s safe to say that college boys do not know the concept of consent. How can they? Most adult men struggle with it. Anyway, the reason I am sharing this harrowing anecdote is that Kriti Kharbanda just shared a similar one of her own and it’s equally as bad, maybe worse.

During promotions for her new movie 14 Phere, Kriti Kharbanda shared that she was a “gundi type” girl when she was younger. She went on to narrate an incident from her life that started out as relatable but then took a very nasty turn. Kriti shared that at a college festival, she once caught a boy taking her photos without her consent and dragged him to the headmaster. All these years later though she crossed paths with this boy only to find out that he is now married to her friend. Usually, I am all for coincidences but this is just weird.

Kriti told Times Now, “When I was in 12th grade, I went to an all-boys college to attend a college festival. Over there, a guy clicked my picture without asking me. Camera phones were introduced back then. Later, I walked up to him and said handover over the phone to me, I said give me the phone right away. Once he gave me his cell phone, I went straight away to his headmaster and handed that guy’s phone to him. And I told him (to the guy), aaj kar diya, dobara himmat mat karna (don’t dare to do it next time).”

Also Read: Kriti Kharbanda Says It Takes B*lls To Turn Down Roles Because Rejection Might Hurt Egos. Sigh, She’s Got That Right!

She added, “Cut to five-six years later, I reached at my friend’s wedding. I went on the stage and wished (her). So the groom asked (the bride)who is this? I have never met her earlier. So, the girl (Kriti’s friend and the bride) turned around and told (him) that this is the same girl who handed over your phone (to the headmaster).”

Kriti said that while she didn’t recognize the groom until her friend pointed it out, she was “embarrassed” to learn about this. She also said that this friend of hers was there with her when she caught this man taking pictures of her all those years ago.

Okay, two things. Kriti has no reason to be embarrassed. If anyone should be, it should be the creepy groom. Secondly, what kind of person marries the man who once took creepy pictures of her friend? That’s just weird. This entire incident it. Although, we are glad that Kriti reported this man all those years ago. All boys need to be taught about consent.

Kriti Kharbanda Celebrated Her 30th Birthday By Gifting Education To 30 Girls. What A Lovely Way To Celebrate