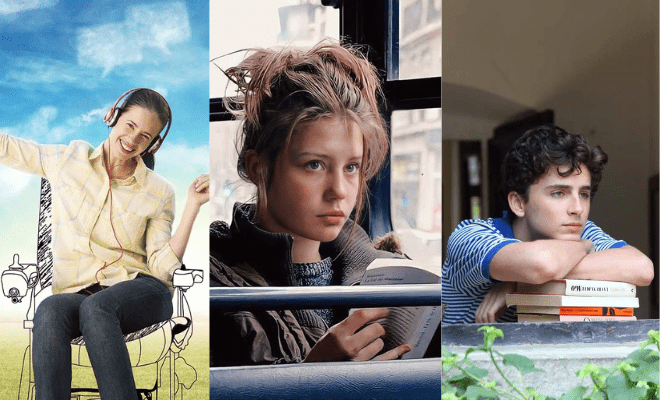 From ‘Blue Is The Warmest Colour’ To ‘Margarita With A Straw’, 13 Films That Captured LGBTQ+ Love Stories So Well

So, I used to love watching when I was a kid. To be very honest, some movies have taught me many important things which also include queer love. Some films made me realise that love knows no boundaries and that relationship between queer individuals is as normal as the relationship between heterosexual individuals, they also experience love and heartbreaks as we do. The films that explore LGBTQ+ stories are very important even for the people who do not identify as a part of the community as it gives insights into the real lives of queer individuals and highlights serious issues faced by them. So, to celebrate Pride Month 2022, we decided to jot down some of the films that beautifully captured the love stories of the LGBTQ+ community. After all, love has no gender!

Here Are 13 Films That Explore LGBTQ+ Love Stories Because Love Is Love No Matter What!

1. Blue Is The Warmest Colour

Directed by Abdellatif Kechiche and starring Léa Seydoux and Adèle Exarchopoulos, the film Blue Is The Warmest Colour follows the beautiful love story of two young women – Adèle and Emma. It is based on the 2010 graphic novel of the same name by Jul Maroh and has won the Palme d’Or from the jury at the 2013 Cannes Film Festival.

Love, Simon is a romantic comedy-drama starring Nick Robinson, Josh Duhamel, and Jennifer Garner. Directed by Greg Berlanti and based on the novel Simon vs. the Homo Sapiens Agenda by Becky Albertalli, it tells the story of  Simon Spier, a high school boy who wants to keep his sexual orientation a secret. However, his life changes completely when a blackmailer threatens to reveal his sexual identity.

Directed by Ang Lee, the film Brokeback Mountain is a complicated love story of two American cowboys – Ennis Del Mar, played by late actor Heath Ledger and Jack Twist, played by Jake Gyllenhaal. It is an adaptation of a short story of the same name by Annie Proulx.

Based on the novel of the same name by author André Aciman, the story revolves of Call Me By Your Name revolves around a 17-year-old boy, Elio Perlman, and a 24-year-old man, Oliver and their heartbreaking romantic relationship. Directed by Luca Guadagnino, it stars Timothée Chalamet and Armie Hammer in the lead roles.

Directed by Harshavardhan Kulkarni, the film Badhaai Do features Bhumi Pednekar and Rajkummar Rao in the lead roles. The film revolves around a lesbian woman, Suman and a gay man, Shardul, they marry each other to appease their families but their life becomes complicated when Suman’s girlfriend moves in with them.

Shubh Mangal Zyada Saavdhan is a romantic comedy film written and directed by Hitesh Kewalya. Two men, Kartik and Aman who love each other face opposition from Aman’s orthodox family but they both try to convince his family of their relationship. The film stars Ayushmann Khurrana, Jitendra Kumar, Neena Gupta, and Gajraj Rao and Maanvi Gagroo.

Directed by Deepa Mehta, Fire follows the intimate and passionate relationship between two young women, Sita and Radha, whose husbands choose celibacy or mistresses over them. It stars Nandita Das and Shabana Azmi in lead roles.

8. Portrait Of A Lady On Fire

Portrait of a Lady on Fire is a French historical romantic drama film directed by Céline Sciamma and features Noémie Merlant and Adèle Haenel. The film is set in France in the late 18th century and tells the story of a lesbian affair between two young women – Héloïse, an aristocrat and Marianne, a painter who is commissioned to paint her portrait.

Moonlight is a coming-of-age drama film starring Trevante Rhodes, André Holland, Janelle Monáe, Ashton Sanders, Jharrel Jerome, Naomie Harris, and Mahershala Ali. The story revolves around a young black man – Chiron who grapples with his identity and sexuality while experiencing the everyday struggles of life. Directed by Bary Jenkins, the film has won the Academy Award for best picture.

Directed by Momoko Ando, the film Kakera: A Piece of Our Life is an adaptation of a Japanese manga. The story revolves around a college student named Haru as she is navigating the changes in her life and her sexuality.

Based on a true story, Pride is a historical comedy-drama film directed by Matthew Warchus. The film tells the story of a group of lesbian and gay activists who raise money to help families affected by the British miners’ strike in 1984. The film won the Queer Palm award at the 2014 Cannes Film Festival.

Directed by Shelly Chopra Dhar, Ek Ladki Ko Dekha Toh Aisa Laga follows the story of a young girl, Sweety and her family who wants to get her married but she is already in a relationship with a girl. The film features Sonam Kapoor, Rajkummar Rao, and Anil Kapoor in lead roles.

13. Margarita With A Straw

Margarita with a Straw is a drama film directed by Shonali Bose, it stars Kalki Koechlin in the lead role. The story revolves around an Indian teenager with cerebral palsy, Laila Kapoor and her relationship with a blind girl of Pakistani-Bangladeshi descent, Khanum.

This Pride Month, may every love finds its way home.